After letting my bike sit idle most of the Summer, about a month ago I finally put a couple new tubes and a set of grips on my bike. I had it set up for street riding, narrow street tires. The plan was to ride it to work and back for a little exercise, and gas savings. I only made a couple rides when Scotty invited me to go downhill riding at Plattekill. Off went the street tires, on went the knobbies. The bike fits nicely in the back of my Impreza hatch, so I decided to leave it there, and do a little XC for exercise after work instead of riding it on the street.

I've been riding mostly at Chenango Valley State Park. They have a pretty nice trail system, but I was getting bored riding there. I went online to look for other places locally to ride. The first place I tried was Aqua Terra, a defunct ski resort 8 miles South of Binghamton, formerly Innsbruck USA. Man, I wish it never closed, it would've saved me a lot in gas. It was OK, pretty steep, doh, it was a ski resort. I walked my bike to the summit, and rode it down. There were lots of ruts from runoff making it a little tricky. I then went across the road to the Aqua Terra pond. There is a trail that circles the pond. It was pretty muddy despite not having rained much lately.

The next place I discovered online was Oakley Corners. I'd never heard of it before. It's close to Owego, about 30 miles or so from Binghamton. Oakley Corners consists of two sets of trails, a North, and South. The South trails are a bit mellower than the North. I rode there first. I then ventured into the Northern set. More hills here, lots of creek crossings too. I began regretting not printing out a trail map at work as it was starting to get dark. I had my phone with me. I suppose I could have downloaded a map, but I may have had to remove a contact lens to be able to read it. I had left my glasses in the car. I visions of wandering around in the woods using my phone's flashlight until the battery went dead. Finally the trail I was on crossed the fire road that starts at the trail head. Instead of crossing the road and continuing on the trail I was on, I decided to follow the fire road. I was relieved when I recognized the trail I had entered into the woods.

I will definitely return to Oakley Corners. I got a good workout, about 2 1/2 hrs of riding. Lots of hills to both climb, and ride down. Tons of roots too, not too much fun there. All in all, much more challenging than most of the trails at CVSP. Next on the list is Shindagin Hollow in Ithaca. It's supposed to be pretty good. I'll make sure I bring a trail map. 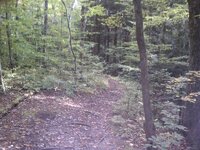 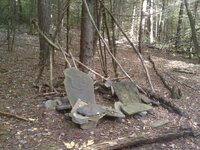 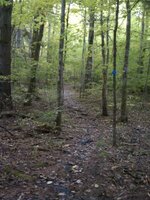 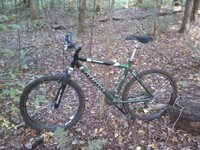 Looking like a cool place to ride. To bad they don't offer skiing or snowboarding any more. I love these types of hills. You like to live on the edge getting lost in a forests glad you got out of their. Maybe next time bring a head lamp. I am glad I got you to start biking again, before no time it be ski time.

Ride a Fat Bike in the snow at Mont Sainte Anne