It was between Killington, Mt Snow and Okemo but looked like Okemo had the most sustained top to bottom runs that weren't super flat. So I headed up to ski World Cup and Nor'easter.

Paid $65 walk up rate. Did not want to burn one of my VT passes on 2 trails out of principle.

So thought since Okemo is first day open maybe the snow will be well manicured, compared to Killington which I thought might be getting skied off. False. Conditions were as follows:

And very very windy up top. Was wondering if there might even be wind hold on the lift. But the bubble chair was really a good thing today.

But I had a secret weapon today... new skis. Totally transformed my hard pack and death cookie game. So this is where this turns into a ski review...

Atomic Vantage 90 CTi 185cm are my new toys for this season. I'm a 1 ski at a time guy, bought these without trying them based on positive reviews, Youtube, and forum chatter. Jack of many trades, playful and yet powerful was the bill.

Now I was mostly not edging this concrete snow except on the flatter sections of the trail, where I was able to make some longer arcs. Mostly schmering on the steeper hard pack, like I only wished I was able to do until now. I was also watching my speed because my legs were burning badly after a summer light on exercise plus the additional body weight. That said I was still skiing faster than most people on the hill. A lot of the trail was death cookies, especially in the morning before they got busted up. I was not even trying to avoid the death cookie patches, these Atomics were really great at making short radius turns, I'd go so far as to say the death cookies even helped with the turn initiation -- maybe because the shovel on these new skis is bigger and more rockered / gradual than I'm used to.

The additional stability of the 90mm waist was also a bonus. I did not wish for narrower skis at all. I would probably say on my old skis were are in dire need of a tune I would have still skied but maybe less runs and probably would have skied much more poorly overall in these conditions. Did not slip or skid once today when I didn't want to. Finally hard pack snow is not my mortal enemy. Nice.

Most people were off the hill by 11:30am. Conditions slightly improved after lunch, becoming mostly consistent cement snow as the death cookies got busted up or pushed to the edge. I made it to about 1:30 at which point I noticed that the burn in my legs was turning into actual weakness so I called it quits before my skiing started getting sloppy as a result.

Think I got about 14 runs in top to bottom. Reasonably priced, quality lunch and a beer break in between there.


Note in the picture below those are NOT scratches on my brand new skis.. hehe ... it's the bubble! 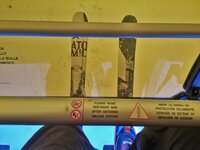 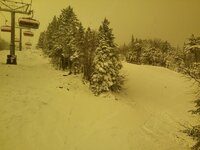 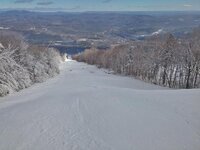 What is really amazing is those pictures look better then anything I saw coming out of Okemo last season. Good for them. I'm looking forward to my Max Pass weekend there this year.

Good work Tuna. Okemo is one of very best (dare I say the best?) early season options in the East every yr. The combo of fast lifts, multiple routes and long vert is impressive compared to the competition this time of yr.

xwhaler said:
Good work Tuna. Okemo is one of very best (dare I say the best?) early season options in the East every yr. The combo of fast lifts, multiple routes and long vert is impressive compared to the competition this time of yr.

[QUOTEThat said I was still skiing faster than most people on the hill. QUOTE]

We would expect nothing less.

couldn't resist sneaking that in there

Since I'm often skiing newly-opened trails there, I find that the death cookies are always there on the first day open after snowmaking. Should be great conditions tomorrow, since it sounds like they're not blowing on the open trails overnight.

That pic looks nice for EC...Tuna! Staying on & OVER those edges of 90mm takes a little effort on our EC trails without depth...well done Tuna.
Nice TR...
Last edited: Nov 24, 2016

bdfreetuna said:
That said I was still skiing faster than most people on the hill.
Click to expand...

You and me, first day the Liftline is open at Berkie. SKI OFF!!!!

Nice TR. I have a comp day at Okemo and might use it this weekend if they get snow and not rain or ice over the next couple of days...

Tin said:
You and me, first day the Liftline is open at Berkie. SKI OFF!!!!
Click to expand... 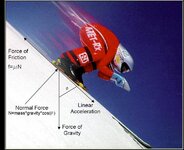 They open terrain fast! Never the earliest, but when they are committed they go for it!

dlague said:
They open terrain fast! Never the earliest, but when they are committed they go for it!

They sure do. They outpace the competition to be sure.


Sent from my iPhone using AlpineZone mobile app
You must log in or register to reply here.