I'm down with Covid right now, so thought I'd take the opportunity to report on my recent successful (and first ever) visit to Mammoth Mtn, CA. My wife and I made the 550 mile/9 hour drive from Salt Lake City to Mammoth on 14 Apr 22. It was a super remote drive through central NV with over 400 miles on two lane roads. Temps were mild (70s) on the drives so no weather worries and you could go 70+ MPH much of the way in very little traffic.
US Alt 93 south of Wendover, NV 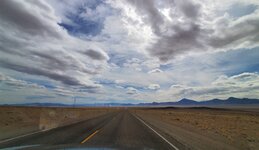 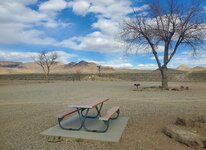 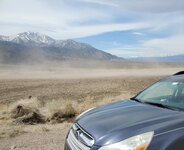 My wife accompanied me and we stayed in a condo near the Eagle Base/Chairlift, but she's a retired skier, so I skied solo this trip. People told me Mammoth was windy. It was windy all four of my ski days there, varying between 25-60 MPH, which impacted lift openings/closures on 3 out of 4 days. I guess the wind is a blessing and a curse. My first day it was a blessing because 2" of overnight snow on Apr 14 skied like 6" of light dusty wind drift in many places on the mtn on Apr 15.

Apr 15 was a sunny day with high temps around 40 degs and the wind was not too disruptive, all the good upper lifts eventually opened in the afternoon. I had a GREAT first day ever at Mammoth. In fact, it was my favorite day of the visit even though more new snow would fall on Apr 16. Mammoth is bigger than Snowbird and a little smaller than AltaBird combined. It keeps more terrain open in late spring than Snowbird. 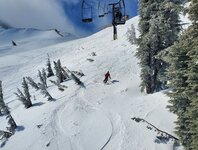 Mammoth has a few VERY old school lift shacks, I wonder if legendary founder Dave McCoy had a hand in building them himself? 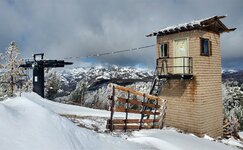 There's a fun life-sized replica of a Woolly Mammoth inside McCoy Station, the mid-mtn lodge at Mammoth. 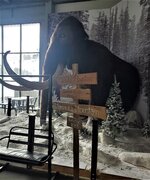 The highlight of my first day was a bunch of runs I made off chair 23 in the early afternoon. The elevation at the top of this chair is approx 10,500'. The snow was really great (that 6" of windblown dusty snow) all across the slopes you see in photo below and I skied all of them. L-R: Cornice Bowl, Dropout and Wipeout chutes on either side of the liftline, and Scottys to the right. Lift lines were very moderate all over the mtn (it was a Friday), although I had the advantage of taking the singles line whenever necessary. 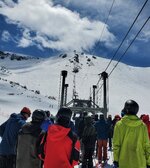 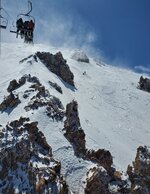 Chair 23 from the top of Wipeout chute, quite a protective structure at the top terminus of this lift, they don't want anyone getting blown off the chair. 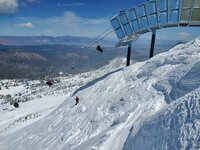 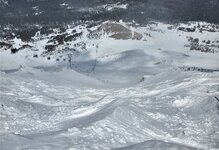 What great conditions, Mammoth is definitely one of the best late season mountains to ski. I absolutely loved our only visit there, we skied Mammoth in July of all times about 3 years ago and the whole top ridge of the mountain was open. Thanks for sharing, keep the photos coming!
M

Sounds like all three of us who went west for our late season trips had a good time! But really, there is no such thing as a bad ski trip.

Can you tell I liked Mammoth Mtn? The famous Minarets mountain peaks of the High Sierras loom in the background. 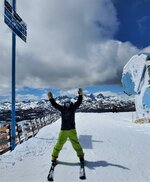 I knew I'd been exposed to covid by a close family member, but neither my wife or I had symptoms at this point. Nonetheless, I minimized my trips inside the Mammoth summit gondola to four in four days, one of those was by myself. I also pulled up my buff. This is a view down Climax bowl not far from the 11k' summit of the gondola. 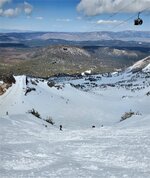 Apr 16, day two at Mammoth was not so good. 6-8 inches of wet snow fell overnight and into the morning while the winds howled. I knew many lifts would be closed. I went and skied from approx 2-4 pm, but only lower four chairs were running, viz was poor and lines were longer because it was a Saturday and most lifts were closed. I concluded that I didn't miss much by doing a short day. Some folks raved about the new snow, but I liked the dryer snow better from the day before. Forgive me for becoming a snow snob 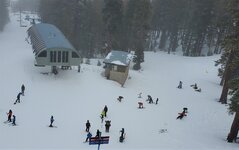 Easter Sunday, 4/17/22, day three was a pretty one at Mammoth with fresh snow, blue skies, and remarkably low crowds, esp after about 11 AM. I was told the mass departure was so everyone could make the 5-8 hr drive back to SoCal by Sunday night. 90% of the people I rode chairlifts with during my visit were from SoCal. The other 10% were from the San Francisco Bay area.

I headed back up chair 23 to ski Paranoids 1 and 2. The entrances were a little rocky, but the snow was good. View of the Paranoids from below, L-R: P1, P2, P3, and a chute called Phillipe's cuts through the center of rocky area at right. 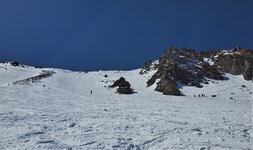 I followed this young lady down P1 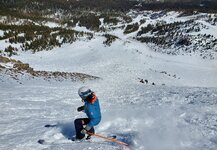 I followed this young man down P2. Most everybody's younger than me on a ski slope 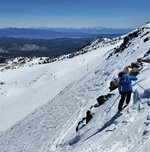 A bunch of photogs were taking pictures of this snowboarder in a nearby area, Philippe's. This was a very tame section, but I guess he'd descended a much more challenging, tight chute above it a little before I got there. 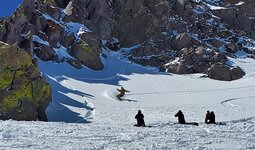 Like the typical geezer, I often carry a pocket lunch, this is a PB&J sandwich, tea and a little bit of Easter candy at 11k feet in summit Gondola building. No trouble social distancing here. Gotta love low-crowd April ski vacations. 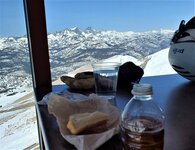 Afterwards I took a run down from the gondi summit on Dave's shoulder, following a friendly lady telemarker, snow was better than it looked, nice and chalky. This photo also doesn't capture the scope of terrain below me, It's probably more than two miles from one side of this photo to the other. 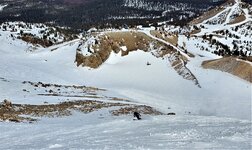 I also made it over to what they call "the backside" by the base of chair 14. Mammoth is pretty huge, Apr 17 was the last day all 3500 inbounds acres were open to the public. 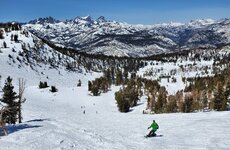 The capper on my fine third day at Mammoth was viewing a portion of the annual pond skim. Weather was nice, no wind on the lower mtn, and boisterous crowd. 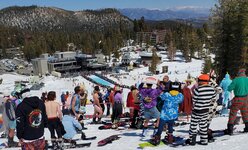 18 Apr 2022 was my last day at Mammoth. By this point my wife was showing covid symptoms back at our condo (cough and fever). It was starting to look inevitable that I was going to get it too and suppose I should have stopped skiing, but I was still symptom-free. I felt ok about social distancing by staying outdoors all day, so I went skiing. I ate my bag lunch by myself at my car near the Mill base area. This was the first day Mammoth cut back on the amount of open terrain for late spring operations. I'd say about 1/3 of the mtn closed down, but I didn't mind because it was mostly lower, melted-out sections anyway. All the good stuff was still open.

View of the upper mtn from top of Broadway chairlift, gondi summit to left, chair 23 to right. cornice bowl center. 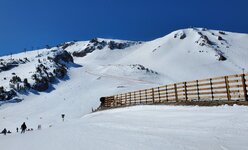 They set up a long course for GS and Downhill races to be held starting the next day (you can see part of the course in above photo too). My last run of the day was some fun carving down the empty race track for probably 1500'+ vertical - a very nice final memory of Mammoth Mtn! 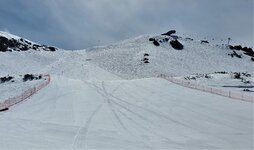 I really enjoyed my visit to Mammoth, it's one sweet mountain: 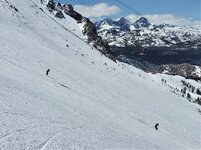 The next day, 19 Apr 2022, we took an uneventful return drive back to SLC. I was quite grateful not to develop covid symptoms until right about the time we arrived at our winter accommodations in SLC that night. I've probably left myself up to criticism for taking this trip under the circumstances. Fair enough. Here are a few of the rationalizations I went through. Condo was prepaid a few weeks prior to trip and non-refundable. Wife and I were actually hoping the trip would help us avoid further exposure from sick family member and not get sick ourselves. I feel skiing has a good element of inherent social distancing especially if you stay out of crowded lodges and I tested negative on the evening of my last ski day. I tested positive two days after returning (three days after my last ski day). Have any of you faced a similar dilemma over the last few years? Thanks for reading.
Last edited: Apr 22, 2022

Unless you are out sick as a dog coughing on everyone then I see nothing wrong with what you did, and the precautions you took. Especially two years in when everyone who wants a vaccine has one.

Mammoth looks awesome. My buddy is out at Kirkwood right now.
You must log in or register to reply here.