As everyone knows, just yesterday we learned that doctors had diagnosed longtime AZer Andy Zee with Pancreatic Cancer (Stage 4). And today we learned that one of our most colorful and passionate members left us this morning at 7:30am to forever ski powder.

Lots could be said about him...he was never short on words...or smiles. For those that did not ski with him, he was an experience. In November 2006 I opened my season at Killington and managed to grab my chair with him and Vee on the Snowdon Triple. After putting the bar down, he had his flask right there ready to share.

In February 2009 they came up to Sugarbush. I was "kidnapped" and thrown into a VW van with Andy and his friends all speaking Polish and insisting that I eat and drink with them as we drove from Mount Ellen to Lincoln Peak. He loved people, he loved making others happy, and he loved life. That's just the guy he was...he loved to be there with you and wanted you to be there with him.

Such as, be careful who you argue over the size of your Kielbasa with (May 2007, Killington):

There's always time for one last run....because you just never know when it will be the last and you may always regret not taking it:

Sharing your passion with your best friend in life is the best thing you can ask for:

Many of you might remember the season that was-not for Andy because Vee hurt herself. He would not ski without her that season and waited for her to rally back.

And for better or worse, sometimes you have to get into the middle of things:

i'll never forget his love of the outdoors and most all his love for his wife, vee. condolences to her & family.

So sad, so very sad...prayers to Andy and Violetta's families. Saw them last spring when they stopped in to say hi, think they were up at Smuggs heading back to kmart. Such a thrill when Andy got to ski Tucks, had great days skiing at the Bush and Smuggs over the years. You'll be missed.

Thank you, trailboss (and the other mods), for this thread. I think it's very generous and kind of you to have some sort of online memorial for our friend and fellow traveller. I think it's very appropriate to celebrate how Andy lived.

They say that, whenever a person died, the ancient Greeks would ask one question: Did he have passion? If we were asked this about Andy, I think that we can all reply in the affirmative: Andy lived with passion and that passion manifested itself in his pursuit of skiing and hiking. Those of us who had the pleasure of skiing with him can probably confirm that sometimes he had more passion than skill or ability. However, there was no denying that he loved the sport and infected those around him with his enthusiasm. In another thread, I reminisced about the last day at Killington in 07,Burkeapalooza and the first trip to Tux. However, the one lasting memory I will have of Andy was his second expedition into Tux. It was the perfect example of his enthusiasm outstripping reality -- or common sense.

When he got it into his head to return to Tux, he set up a thread on AZ. The plan was to head up to Tux, ski, spend an overnight at the Hermit Lake Shelters, ski the next day then hit the Sherb to get to the cars. Despite promoting it heavily on AZ, I think I was the only one that got suckered in. Andy kept pumping up the trip by posting photos of all the new gear he was buying for the trip -- sleeping bag, ice ax, crampons, hiking boots, backpack, stove, water purifier, etc. Seems like he was buying Campmor or SAC's entire inventory.

On the day of the hike, he got to the trailhead about an hour ahead of me. I started up the trail just hoping to catch him somewhere in the Bowl. Lo and behold, about 15 minutes into the hike, I saw Andy at the first right hand turn along the trail just after the first bridge. An hour in and he was just at the start. The reason was apparent -- he had a huge tower on his backpack. There must have been more than 70 lbs. of gear on him. Since he was staying the night, he brought his entire apartment with him. There was a pot of chili in the pack and just about everything he bought at Campmor. There was even stuff tied to the top of his A-framed skis.

I walked alongside him for about an hour. It was clear that the weight of his pack plus his lack of fitness was taking a toll. Then he complained about blisters on his feet. He had not even broken in his new boots. I asked for his first aid kit but he had none. Despite all the junk, he didn't have the one thing he needed. After patching him up, I told him that I had to go ahead. I was only doing a daytrip and I needed to get my runs in.

Eventually, I made it to the Bowl and headed down after 4. I found him at HoJo's at around 530. He had just gotten there. He looked beat but he was fine. He told me that he asked several hikers to carry some of his gear. He snapped a photo of me and I left. The next day, he climbed to the top of Hillman's Highway, took a photo then skied down. Then, he went back to the shelter, put on all 70 lbs. on his back then skied back to his car. All of that preparation, effort and hiking for one ski run. If that isn't passion, I don't know what is.

Rest well, my friend. Thanks you for your passion and enthusiasm.
Last edited: Oct 7, 2013

Nice tribute here. My thoughts are with V. Andy had quite a bit of enthusiasm towards the sport. I remember closing the season with him at Killington a few years back in the pouring rain hopping from patch of snow to patch of snow. He was fun in the parking lot, and fun on the hill. All the best to you rest Andy. Very sorry.

Although knowing Andy's passion for skiing through AZ, I had the pleasure of meeting Andy & Vee one summer weekend and enjoyed their company very much. I gave him and Vee some "rough" directions on where to get live Lobsters and a scenic drive afterwards before their journey back home. He had sent me a note the following day thanking me for the suggestion and how much they enjoyed the trip and meeting us.
RIP Andy and thoughts and prayers to Vee.

I met Andy for the first time two Falls ago. It was around the beginning of November. He snapped this pic of the Ewok Summit at Kton. 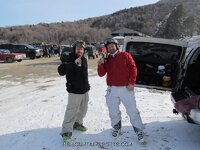 Never met Andy but through website interaction...a real loss. Enjoyment of family and the spirit of skiing....one can't ask more of another. Nice pics guys....

Crusty and opinionated... but really into skiing..

We may have disliked each other on some levels - but I always respected his love of skiing. And the fact that even though he wasn't a very good skier - he still was out there pushing himself.. In the face of some seriously nasty blasting from the cool Killington ski crowd..

I also really respected his love for his wife.. She was with him everywhere... Nice to see..

RIP dude.. Try not to piss off too many people on the other side.. I'll toast you at Tucks this spring..

Well can't say I had much interaction with him on AZ but it is sad to see a brother fall! RIP

Nice thread everyone, the memories are really touching.

I never met Andy in person but I'm very saddened to hear of his passing. He always seemed like a personable guy and from everyone I have ever talked to said he was a hoot to ski with. I wish I had that opportunity and was kinda fingers crossing he was going to make it to the AZ summit last year. His passion for skiing was manifest in everything he did. I also was 'friends' with him on Facebook and as far as I can tell he lived and breathed the outdoors.

Especially for his friends and family, I am sorry to hear about his passing.

Now I'm kicking myself for bailing on a Whiteface trip with him a few years ago. So sad.

I never met him, but I always enjoyed his posts here. RIP Andy.

emmaurice2 said:
I never met him, but I always enjoyed his posts here. RIP Andy.
Click to expand...

I never had the pleasure of meeting him... But I was glad to have known him through the forum...

One of the earliest memories of being on ski forums for me was a thread that he had about removing a couch from his apartment. He took a chainsaw and cut the couch up into smaller pieces to get it out easier.

I don't think I've ever laughed at anything on a ski forum as much as that thread.

Here's to ya, Andy... I hope you have couches, chainsaws, skis and powder on the other side...

Sad to see a member of the community pass, especially under these circumstances.

OPM said "Heaven is a Halfpipe". I prefer to believe heaven is spring skiing in New England.

WJenness said:
One of the earliest memories of being on ski forums for me was a thread that he had about removing a couch from his apartment. He took a chainsaw and cut the couch up into smaller pieces to get it out easier.
Click to expand...

Haha, I forgot about that.

Andy was a good hearted Polok. He certainly was passionate about whatever he was involved with. He did like to get into flame wars on the forums, but that was just part of his passion. In person he was just a big hearted galoot. A pleasure to be around.

Pow days in heaven buddy
You must log in or register to reply here.

Anyone ever skied North Carolina?