Ascutney Auctioned to high bidder - Title Free and Clear. I am not sure what this means, anyone hear anything?

Aren't they missing a lift?

No HSQ but everything else is there. Gonna have to do some research on this one. Good find manhattanskier!

Yeah, they sold their high speed quad to Crotched Mountain. There is only a few trails that are only served by that lift so there is very little loss, it also slightly raised their vertical feet.

thetrailboss said:
No HSQ but everything else is there. Gonna have to do some research on this one. Good find manhattanskier!
Click to expand...

I was really surprised, thank you internet this video is less then 24 hours old lol Hope they reopen!

manhattanskier said:
I was really surprised, thank you internet this video is less then 24 hours old lol Hope they reopen!
Click to expand...

Another high point on the roller coaster life of Ascutney. Never skied there, but what caused this place to fail? Twice, correct?

And "free and clear" means that the resort was sold to a new owner...without all the debts and legal issues that it had (generally speaking). So the new folks can do with it as they want.

HERE is a short but fairly good history of Ascutney. I would imaging that it would take a lot of $ to get the mountain operational again, probably a lot more than it would ever generate.

On a side note, I really enjoyed riding Ascutney's HS quad at Crotched last year.

ss20 said:
Another high point on the roller coaster life of Ascutney. Never skied there, but what caused this place to fail? Twice, correct?
Click to expand...

Second time was because the ownership/management was just piss poor.

Here's a snippet of the drama:

The Plausteiners bought Ascutney Mountain Resort out of bankruptcy in the early 1990s for $1.1 million. But it didn’t take long before they too started having money troubles.
In 1998, the Plausteiners — as Snowdance LLC — were the majority owners of the ski resort and investment banker Dan Purjes and Myles Wittenstein were the minority owners. In 2005, Snowdance took out a $4.5 million promissory note from PRIF Ascutney LLC, a New Jersey-based investment company. Soon after, in 2008 when Snowdance began defaulting on its loan, Purjes and Wittenstein formed a new company, MFW Associates, and purchased the $4.5 million promissory note for $850,000.
MFW started foreclosure proceedings shortly after, citing $1.8 million in debt.
Click to expand...

So MFW essentially pushed out the old owners...free and clear.

It's actually a nice ski area with interesting & challenging terrain for southern VT. Skied there quite a few times. The terrain beats the heck out of most of it's nearby competitors with the exception of Magic maybe. The problem to me seemed to be no base elevation & it received little natural snow. It's outside the spine of the Green Mts. off on it's own in the valley. Magic has the same problem but to a lesser extent. I hope to be able to ski there again someday. Never skied there with the new lift that's now gone, don't think it added much except for a faster ride.

Oh & the parking lot was a mud fest in the spring. You could sink up to your floorboards. What a mess trying to walk to the base lodge.
Last edited: Nov 4, 2013
C

I skied there a few times and they do have nice terrain. I have long thought that Ascutney could make it if only they could run a lift up to the top, adding at least a few hundred feet of vertical. The top, however is part of a state park and, I believe, off limits. I went there once on one of those super cheap deals where they make you sit through a sales pitch for timeshares. Very glad I resisted that pitch.

Growing up skiing Okemo, I always looked across the valley at Mount Ascutney and wondered what if. It's a pretty massive mountain with some of the steeper terrain in Southern VT. If development was ever allowed to the summit, the vertical would be probably in the 2300 foot range. It's got great access right off of 91, perhaps the best access of any VT ski area. With such a location and it's physical assets, Ascutney could have been a major player in New England if it were developed fully during an era when environmental restrictions weren't so tough in Vermont.

As a mid-sized mountain I think it will always likely struggle though. I skied there only a couple of times growing up and really enjoyed the terrain. I just think it's a tough sell at it's size.

Hope I'm wrong and the new owners revive it with great success. 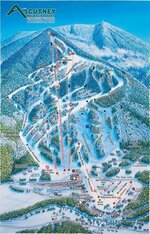 A quick thought, maybe this is probably the mountain that the people at Hermitage(Haystack) should have tried to reopen as a private area. I do realize that it wasn't available at the time, just a "what-if?"

Quietman said:
A quick thought, maybe this is probably the mountain that the people at Hermitage(Haystack) should have tried to reopen as a private area. I do realize that it wasn't available at the time, just a "what-if?"
Click to expand...

I was thinking the same thing. It's certainly got much better terrain than Haystack.

deadheadskier said:
I was thinking the same thing. It's certainly got much better terrain than Haystack.
Click to expand...

And access to a killer mtb trail network
You must log in or register to reply here.