Not directional boards but ones with different heel and toe sidecuts. Anyone ridden one? I know Gnu makes one but who else? Is it worth the extra cost?
S

Ridden... Never owned. It can definitely be noticeable when making heels side turns. Is it worth it? With the right technique not sure you need. Yes makes one.. And a new model for 2014 called the asym.

Never ridden one (barely heard of them). But it makes a lot of sense. I'd love to take one for a spin.

Also curious about asym skis, which also make sense in many ways.

I snowboarded for only a couple seasons back around 1999 so I'm no expert but wouldn't this be odd when you're riding switch?
S

Most are twins... So when you ride switch the heelside sidecut is still heelside

No, because it's symmetrical heel side vs toe side. And your heel is still your heel when riding switch. Basic concept is that heel side turns are different than toe side turns (more power vs more fine control) so the side cut is suited that side of your turn. Not saying that I know how well it works, but that's the gist anyway.


Sent from my iPad using Tapatalk

I've seen guys switch on race decks before... I cringe every time...
I can just imagine myself digging..

The old asyms actually looked asymmetrical..
Now most the asym part is inside the deck so everything is almost equal on the exterior... 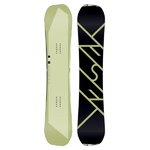 They still look asym, at least the ones I've seen. It's definitely a sound concept but I'm wondering if it's worth the extra money. Not sure about the Yes but the Gnu is like $800. I wouldn't spend that much on a board unless it was a serious advantage. Otherwise I'd rather put that extra money into a split setup. From what I've read so far it sounds like it does make a difference but I can't see why they have such a steep upcharge. I can't imagine they cost much, if any, more to manufacture. Maybe they just figure they won't sell well at first so they produce less and need to get more for them to offset the lack of volume? Or maybe they just figure since hardly anyone makes them, so the market will bear a higher price?
S

The gnu asym pickles aren't that much more expensive. Are you talking about the Impossible?

I don't think it's the asym that makes that deck pricey it's all the other tech.. Special stringers and what not.

Also I'll add... I rode one of the Yes Greats which is what the new Asym model is based on. Overall they were great boards.. Regardless of asym shape.

You definitely can notice the difference on turn initiation on the heel but at the same time it's not something I think you necessarily need... in fact depending upon your technique you might not actually like it.

Isn't not feeling it the whole idea?

Never ridden an asym or the greats, but I know that Yes makes a solid board. I have spent a few days on a Pick your line. The concept scares me a little....I fear change, just moved off of full camber to a never summer sl.
S

dmc said:
Isn't not feeling it the whole idea?
Click to expand...

Maybe.. I only have a day on one and it was certainly a difference I could feel. I'm speaking more about the difference from heel side initiation on a regular board..

I also need to try some of these new hybrid profiles, the closest i have come is the whole, camber between the feet rocker tails and tips. I have a bum back knee and giving it a shot this year with surgery probably on the horizon. Was thinking one of those profiles may be a bit more forgiving towards the end of the day versus my salomon man's board.

Being an old time snowboarder who started on an asym board back in the late 80's and now rides on symetrical carving and racing boards, I'm going to offer that you won't get much benefit out of asym boards. The main purpose of the asym was/is to facilitate clean carving on both toe and heel turns. I am assuming you are riding soft boots. If so, how much time are you spending carving on your board vs. parks or switch riding? If you are really looking to spend more time carving, I would suggest that you look at some symmetrical carving boards designed for soft boots. Or switch to hard boots, again with a symmetrical carving board. Donek and F2 have some great carving boards.

I'm getting the feeling that this isn't for me. I do love carving but I have no problems on my heel edge and I think this might actually throw me off, at least in the beginning. I think I'm more interested in some of the wacky profiles out there. Lib Tech's stuff really sticks out to me. I'm looking at the La Nina MC which has rocker between the bindings, agressive camber in back and mild camber up front. Sounds like it fits my riding style quite well. I hardly ever ride switch beyone landing a 180 and even then I usually spin back quickly. Plus they have some of the best graphics in the industry, IMO, even though graphics are the last thing I look at.
You must log in or register to reply here.

Anyone going out into the storm tomorrow?
2