We headed to Attitash for the Ride and Ski day and the fact that it was free for veterans. The trek started from Concord NH with near white out conditions on the highway but that cleared up past Tilton. We were not to excited about going there since we are not a big fan of their lift setup. Being a season pass holder at Cannon - we almost bagged it and were going to hit up Cannon. Turns out Cannon sounded to be in rough shape so Attitash worked out. I did like that they had a premium parking lot next to one of the lodges if you were willing to pay the $15 - which I did.

There seemed to be a lot of people there but the lift lines were never overbearing. However the lodge where Ptarmigan's Pub is was a mad house. More on that later. In any case, we quickly learned that everyone seems to ski the outside runs on both pods. So effectively the following trails/trail combos were really crowded: 1) Upper Saco, Lower Saco, Ammonoosuc, Lower Cathedral 2) Morning Star and Snowdancer 3) Wandering Skis. We were skiing with my sister who is a bit tenative and ski the previously mention trails ONCE. Due to the traffic, trail junctions and turns were getting scraped off quickly. Some of the pass holders said that the snow making has been marginal and they are probably being conservative because they have not been that busy so far. The runs for the most part were in OK shape except for parts of Morning star and the random ice patches that became more obvious as the morning roll on. It seemed like there were lots of beginners there and they panicked due to the firm conditions. I also ended up have a few near collisions trying to get around people. We came to the conclusion that people were not skiing the middle trails or black trails. So we skied Bear Peak for the morning. So Illusion featured the top section as a down hill skating rink after crossing Wandering Skis it was pretty good. Avenger was sweet firmness. While some might consider it icy, I thought it was fast - nice pitch that let you rip it up. However, it too had a sketchy start. Upper Kachina was not good but then connecting on to Trillium was very nice. After skiing just about everything there we headed in for lunch skiing down Morning Star and Snow Dancer one more time. Not a big fan of their crossover trails!

Once we got in, we tried to get a table at Ptarmigan's Pub which is the mad house mentioned earlier. They did not have someone seating you so it was a free for all trying to get a table. People were hovering and 15 - 20 were wasted. We finally got a table and service ended up being very slow. We ended up talking to a pass holder and he was spilling the beans about Attitash and how disappointed he was about operation this year. One thing nice about ski areas - you can talk to anyone! We finally got our food which as OK and quickly ate in order to get out with another friend.

When we did get out we decided to ski the center of the Attitash side and ski only the Express lift. We basically burned up 8 non stop runs all focused on Grand Stand, Moat and White Horse. We started with Moat and no body was not it and the conditions were the best we had seen all day so we skied that again. We then thought to try Grand Stand and found the same to be true there which a very fast bit crunchy PP that was so fun we skied 4 times in a row. Lastly, we skied a couple of runs on White Horse a narrower old school New England style trail that popped out under the Summit Triple where there happened to be some snow making which produced nice soft bumps for a short stretch - which happened to be the only bumps I saw all day.

After those runs we headed in for the Ride and Ski Party and what a party it was. There was a great band playing with songs that were more 70's and 80's with a few current songs here and there. What was also very cool was they hanging of the flags for each branch of the military.

Overall, the afternoon skiing was best, but I do not think I will every be a fan of Attitash. I wish the triple to the summit would be faster - as it was we made one trip to the top. The express chair delivers short runs IMO. I do not like the criss-cross deal thay have going there. However, Bear Peak has some decent runs that are top to bottom but things get skied off quickly - definitely a morning first side of the ski area.

The parties are always fun and people just seem to be be happy at the end of the day - could be the beer! 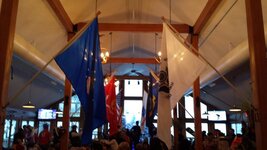 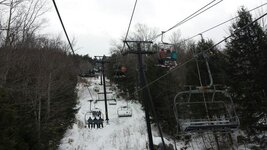 Goes without saying - not sure who that guys is or the woman behind the sticker! 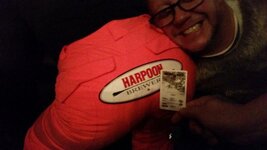 Ptarmigans is definitely disappointing. Plenty of space up there to make a great ski bar / restaurant. My favorite runs at Attitash are all off the Summit. I dig Idiots, Tim's,Tight Rope and Ptarmigan. Great pitch on all but yeah the lift blows.

When I was there I also liked the trails off the triple a lot more. A hsq up to the top would be awesome
You must log in or register to reply here.