On the snow by 10 with temp at 36F and 2" of freshies from late yesterday. Warmed up on Roaring Brook which had plenty of untouched snow that looked good to the eye but was annoyingly grabby to the skis. Returned to the lodge to apply some polymer which helped somewhat. The upper mountain was shrouded in clouds: 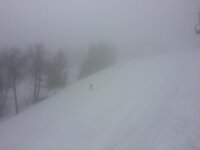 ...which lasted til noon to one degree or another. At 1 the annual Slush Cup commenced just above Overlook Lodge with tunes blasting and the outdoor grill cooking on the deck, which presented an opportune time to break for lunch. The host kept the crowd laughing as he covered the play-by-play for each participant. 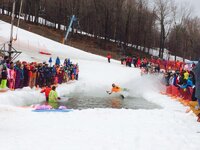 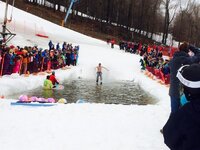 By now the sun was peeking through the clouds from time to time and the temp started to rise. After lunch I made my way over to the gondi which had its own small pond you had to skim over to get to it. The upper mountain trails, however, were still skiing very well, softening up nicely but not too much, like Dot Nebel here: 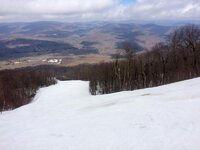 All the natural trails unfortunately were shot and I figured the trees were too, until I came across 2 sections that still were hanging in there- upper Algonquin/Peekamoose, and Pepacton: 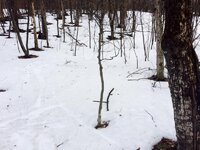 It's comforting to have the old rock skis ready at key times. The bumps on upper Peekamoose were in great shape so I wore my legs out on them to end the day. On my last ride up on the gondi I bumped into a group of old friends and enjoyed a last ride & run together. Hopefully we'll get to ski together again before not too long. Belle plans to open tomorrow (Sun.) then close during the week and possibly opening next weekend. Keeping my fingers crossed.....
Last edited: Apr 7, 2019
You must log in or register to reply here.