It's $10 on Thursday nights. It's 45 minutes from work. So I took off after work up to Thunder Mountain Access Rd.

I live in Northampton... we have some crusty snow still on the ground. I work up the road on a small mountain and there's a bit more snow there. All super wet and refrozen crap snow though. Nothing that makes you want to ski and plenty of bare areas.

Anyway I can't sit around all winter waiting for enough powder in the trees...

Got there exactly in time to ski at 6:00 when the deal starts. I took about 6 runs. The available terrain at night was limited, and Competition was hosting high school / middle school race leagues so that was not worth trying to ski out of the way of the gates.

All trails had the same conditions.. which is as Berkshire East calls it "Groomed". Hard snow for a base but enough loose frozen granular to have a bit of fun with on the sides.

Frankly I'm impressed considering how much rain and horrible winter weather we've had in western Mass the last couple weeks. Their natural snow trails are basically bare with a light frosting.. but they have a respectable base on the snowmaking trails and I saw at least a couple examples of creative and skilled grooming which improved experience.

All that said I don't like night skiing in general and there wasn't much open and what was open was good to ski but nothing I wanted to start doing laps on. I don't like to ski fast on hardpack (but I do like to ski fast) and I don't get a ton of enjoyment from making quick turns on the side of a scratchy trail.

So I spent 2 hours skiing and took off. Worth $10. Made me miss the *Incredible* powder days I had at Berkshire East last year. This is one mountain that really is so much fun to ski all day long when there's a decent amount of snow. 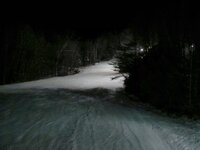 Glad they are surviving, they seem to be putting more into snowmaking than previous years. Can't wait to have a solid base in all those areas in between the trails. They keep so many areas thinned and clean that are not on the map.
P

Love the BEast. There are very few ski areas like it that are left. I'd hit up Berkshire East a lot if I were only 45 mins away.

Looking like a fun hill. Sorry about gladed stuff not being open. I bet natural snow falls it great time with locals all over like another hill I love in NY hopefully one day I get out there this winter .
A

Thanks for the report, first visit of the year there this Sunday. Had some incredible days there last year!

Can't wait to go after they've gotten decent snow. It's become one of my favorite hills.

Nice post, $10 is a dealeo to be jumped on frequently from where you live....

Berkshire East is surviving right now. I ski there 4-5 days a week and it is what it is. Improved grooming and snowmaking have really benefited the mountain. When I was a kid it was very icey and always an adventure. Mountain rocks when is has natural snow. Great trees and natural snow trails. If anyone here wants a tour send me a message I'll gladly show you around.

Sent from my SCH-I545 using Tapatalk
You must log in or register to reply here.