I took my 11 year old daughter to Big Snow on Wednesday evening. The tickets were $35 each for a 2 hour block, which is about all you need since you're just going to lap the same couple trails. It was definitely nice to get in some skiing when there is no skiing outdoors. After check in and getting booted up you get scanned in as you enter the snow, that's when the 2 hours starts. It was really refreshing to get into the snow dome and feel the 28 degree temperature.

My daughter and I just lapped the regular trail and the terrain park trail for the 2 hours, she also convinced me to hit the box on the terrain park. The box wasn't hard since it was really wide, I usually avoid terrain park features and just ski around them.

My daughter asked me if I like the snow dome and I told her I was happy to be skiing and it's fun. She said she wants to come again so I figure I'll probably be back a couple times before the local areas open. I know a lot of people here like bumps but there were none, the terrain park side had some decent jumps though. 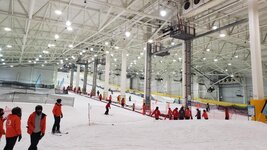 I tried to attach a few more pictures but they keep rotating and posting upside down. If I figure it out I'll post more.
Last edited: Oct 12, 2020

That's pretty cool! A nice way to get some turns in this early and without a long drive. I take it not too far of a ride for you?

About an hour. I live about 10 minutes from Mountain Creek.

I went back there today. Here are a couple of pictures. 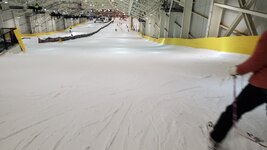 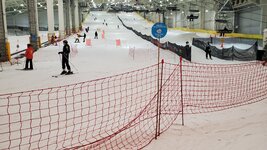