Been fighting off a very severe cold all week, almost cancelled reservation I had in Barre for 2 nights, but decided to follow through with plans in hopes I'd feel better in the nick of time. My wife was with me.

Due to holiday weekend and blackout dates, and my determination to ski as cheap as possible, I was able to use a Bolton 4 pack ($25 each, no blackout dates) at Bolton for Jan 1 and I had a Warren Miller movie Sugarbush midweek pass which was not blacked out January 2nd.

I would have gone to Jay Peak at least one day, believe me, if not for my 2-for-1 deals being blacked out through the 2nd.

Due to being sick it was easy to not party/ go to bed early on NYE. So got to Bolton and on the chair just around 9:00. First run was Preacher > Playground. This was exciting but the icy conditions on "that section" of Preacher and, like, exposed logs and similar unskiable obstacles on Playground made it a one and done.

What was groomed at BV skied very nicely, there was no ice or even really hard-pack to be found on the unbumped trails. Some fast confident cruising. Wildnerness chair opened up and the stuff over there was really nice. So spent half of the day lapping cruisers and the rest checking out TNT (crusty bumps and some stuff to avoid, but fine), Hard Luck (firm and fun) and Vermont 200 (had a rocky ice section to kind of avoid, I think I have a photo of that below).

Good day, good vibes at Bolton, felt physically pretty good despite still coughing up a lung and blowing my nose.

Next day was Sugarbush. Woke up feeling pretty run down, bad sleep and the cold was still kicking. I could have not skied today and had no regrets, held on to my passes. But we were up there, so we went.

Heard 2 guys at the coffee shop on the way over there say "Sugarbush is all ice right now". Encouraging; I doubted them.

Ended up realizing the conditions were not as good as we had skied at Bolton yesterday, harder pack, icy spots, ski-killingly thin woods, in other areas frozen granular. If it was day 1 or I was not still sick would have gone at it harder. As it was we made maybe 10 runs, tried a bit of everything and by 1:30 we were in the Castlerock Pub and we knew that was that.

Was glad to have skied on a basically free voucher, definitely softens the blow of a less than amazing day on the hill.

TL;DR .. Bolton has more and better snow and I like it better 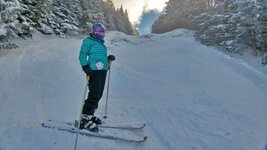 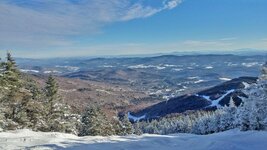 Awesome stuff! Have 3 tix to Bolton to use, is it worth a day trip from our neck of the woods?

Wait for Timberline to open up if you're making a first trip. Half of the good stuff is down there. (Lost Boyz/Lost Girlz, Adam's Solitude, various woods)

If you go up when it's full on I'd say it's def worth a day trip, get up there early too. HMU first I'll give you a to-do list to save you some time as well as some off map spots.

Sounds good. Thanks. Thinking a weekend trip in February.

Preacher is a nice run when we'll cover as well as the trees in that area. Vista Glades can also be a lot of fun. I take it Show off was still closed? Sounds like Bolton delivered in any case. Nice report!

Show Off was under the guns, with snowmakers constantly adjusting them throughout the day. Not sure if Spillway was open as I never went around the top of Sherman's pass to find out. (took Alta Vista or Hard Luck Chute each time instead besides the Preacher run)

bdfreetuna said:
Show Off was under the guns, with snowmakers constantly adjusting them throughout the day. Not sure if Spillway was open as I never went around the top of Sherman's pass to find out. (took Alta Vista or Hard Luck Chute each time instead besides the Preacher run)
Click to expand...

I like all of those runs but I try to cut hard over to Spillway Exit to avoid the flat spot around the top of the Mid Mountain lift and Deer Run. I also like Cobrass but that gets a lot of traffic and get scraped off early.
You must log in or register to reply here.