Our original plan was to ski Jay Peak but morning plans fell apart so we looked into afternoon opportunities, My brother-in-law is a Coos County resident so we took advantage of Coos County resident rates for half day at Bretton Woods. The temp as around 45 degrees on our first run. Generally we head over to West Mountain but due to conditions we decided to head up to the summit of Mount Rosebrook.

From the top of Mount Rosebrook, we headed down McIntire's Ride to test conditions. The trail is rated Black but is an easy run with a few bumps towards the top. We were able to get some good speed so we thought about heading over to West Mountain by heading first down Upper Express, Fabyan's Express and a couple of other connectors. We popped into the glades of that trail and the glades were great. We then took Zepher HSQ and headed down Stillwater (easy) and then headed down Avalon. Off that trail there were other glades that were also in great shape. Heading up West Mountain Express we took Waubek which is a really fun and fast trail - until you get to the bottom. We were getting hungry so back to the top to get speed to work our way across back to the base. The idea was great but the conditions did not make it work so well. Once on the flats the snow was slow so skating was in order. In the end we never went back to that side. I would not recommend that if you hate flats on slow snow.

We ate in the pub and the food was pretty good! We had apps and a coule beverages! Then it was time to head back out!

We decided to head to the summit of Rosebrook and skied down Bodes Run then Diamond Ridge over to Decpetion Bowl. The only problem the bottom of Deception Bowl is flat so that was a one time deal. After that we lapped Bethlehem HSQ for three run burning up Big Ben and Down Under. Even though the conditions were soft we we able to get a lot of speed especially down Down Under. We had fun with that and our last run was an all out sprint to the bottom and that was a blast!

We retired to the deck for a drink and talked about the runs. It was a fantastic day for the most part and we generally like it there! It is a cruising mountain with glades that are very open. The steeps there are nothing to really write home about and moduls are not easily found. It is fun if you want to fly! 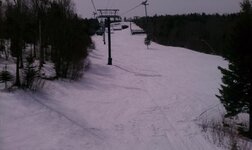 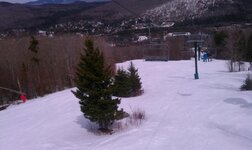 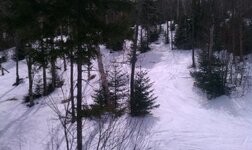 Got on first chairs at 8am. Was cold and cord. Temp in 20's. Groomers had been out, the usual one side of the trail.

Trails that have snow making still have good cover. Dirt showing in spots on the two trails w/o guns that I tried.

I thought it was awesome day to ski. Got two hours in before sun started to take over a little. By moving across to skiers left, were able to stay ahead of that until noon. When it became full "Spring" conditions.

Being Easter, crowd was light for a weekend. Ski on, or less than a minute wait at lifts.

With only two short water breaks, this old guy was done after 5 hours at 1pm. Wish more places opened the chairs at 8am in the Spring !

Gotta say, if you have "bunny" age kids or grand kids, the MT Washington Hotel put on an fantastic Easter program.
H

I had a great time with my daughter. Only $29 for almost fully open mountain with great snow was a great deal.
You must log in or register to reply here.