Full on winter at Bretton today. They got a good dump from the storm, so there was deep powder everywhere. The place was practically deserted too, so it was an all you can eat kind of day. The glades were particularly prime. I got to ski some glades I never had a chance to ski before.

The powder was kind of medium density, so not super fluffy, but not heavy either. Temps were about perfect in the low 20's, and were slowly dropping during the day, so by closing time it was getting rather brisk. Had some wind too, but mostly only up high on the lifts. Tomorrow looks savagely cold, so that's why I opted to go today.

They opened Waumbek today and it was basically untouched. My skis floated pretty good in the deep powder, but I should have put powder baskets on my poles. I was blasting down Waumbek and was surprised by an unmarked water bar with a stream running though it. I couldn't stop so tried to ski over it, but should have jumped it since one of my skis came off and I landed pretty hard on my shoulder and tweaked it a little. 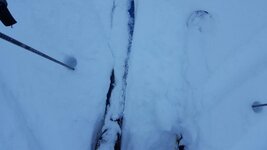 Bretton wasn't shy about opening trails that had interesting conditions. Here's what Darby's Drop looked like. 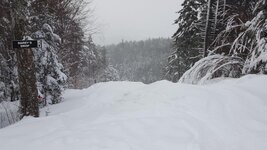 One new glade I tried today was the Boundary Line Glade. It was really wild and it has a cool ledge you can drop off. 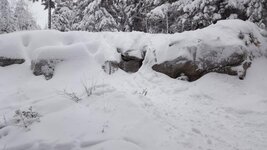 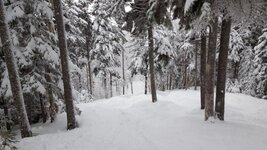 I ended up skiing bell to bell since you don't get conditions like this very often. My legs were screaming for mercy by the end, but it was worth it. This was one of my best days of the season so far.

Nice report! I was there on Tuesday for 4” of fresh snow and conditions were very good. You really scored.

Looks great. Love Boundry line, but there's always been more of a base than that pic shows when I've been on it. Time to head north.

Edd said:
Nice report! I was there on Tuesday for 4” of fresh snow and conditions were very good. You really scored.
Click to expand...

Yeah, they got something like 20" of snow this week! We've had some good storms this season.

It surprising sometimes what a difference there is on the north side of the notch. As I was driving up, the roads were dry and the temperature was about 32. As soon as I drove through Franconia notch, boom, the temperature dropped almost 10 degrees and there were thick clouds and it was snowing. It was like I was suddenly in Canada.

Man I really got after it yesterday. When I rolled out of bed this morning it felt like I'd been hit by a bus. Took a while to get moving.
C

Nice report, was there Wednesday 1/9/19 Full on damp powdah day nonstop, poor visibility but stayed close to the back seat with close to a foot , nice at top but thick near base. Need some wider planks.
You must log in or register to reply here.