Was up at Bretton this weekend. They still have a lot of snow and opened up the Rosebrook summit lift.

Saturday was foggy and overcast, with variable, but generally good snow conditions. Lots of leftover powder stashes, but the powder was feeling a bit thick and heavy. It skied better after it got chopped up a little. Credit to BW, they opened a lot of natural trails including ones with lots of water bars, so found a lot of interesting obstacles and conditions to ski around and through.

Sunday was off and on NCP drizzle, which made for nice soft snow and a deserted mountain. I checked out the upper terminal of the gondola project. They've actually poured a lot the foundation for the new lodge already, so looks like they have a head start on building it out next season. As far as the gondola itself, it looks like the work has slowed to a snails pace, so I doubt it will really be up and running for much if any of this ski season. 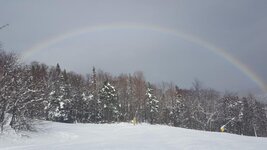 Here's the new summit lodge location relative to the top of the Rosebrook lift. It was quite windy up there today. 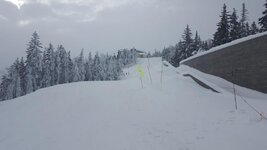 The glades were skiing nicely on both days. Lots of soft snow and hardly anyone in there. 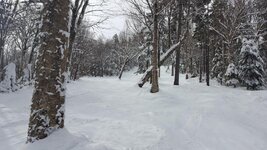 They got a couple of inches of new snow Sat night before it changed over to NCP. 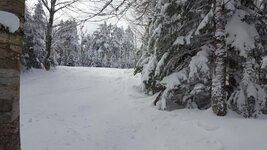 IMHO the best gondola offloads are the ones integrated in a summit lodge like Cliff House at Stowe.

Yeah the gondola offload seems a little exposed. Not sure what it will look like when it's finished. Wind isn't usually a problem there so maybe they decided an enclosed design wasn't needed.

Great TR. Interesting pics on the summit lodge and gondola.
You must log in or register to reply here.