Well, we skied close to home on Saturday at Pats Peak with Nemo finishing up! Though we had really good powder conditions, the runs were short and lifts slow.

In any case, we were eager to get out and stomp some bigger turns. Not that Bretton Woods is a huge challenge; it does have lots of acreage and is fun to ski! And that Sunday was a bluebird sky day which made it feel warmer than it really was!

Whenever we go to BW, we always start by working our way to skiers left to ski down Waumbec which is one of our favorites! It starts off a little slow but them ramps up through the middle stretch then flattens out towards the bottom. The trail skied great except for the steep roller that had been scrapped off (many slam the brakes on since they were not expecting the drop). Happens all the time! The sides were fine. In fact the whole trail except for that little spot was perfect! We also made several runs through the glades on that side (very wide open and easy to ski), which are illustrated as a black but skis like a blue at Jay Peak. It is still fun! The nice thing about skiing that section of the resort is the capability to get back to the lodge without going up and down several lifts. It is a very easy run, but it is long and direct! Can be troublesome for snowboards in some spots.

After taking a quick break to try a little Tuckerman’s, we went back out to ski the resort on the skiers right. My favorite run over on that side is Bode’s Run then heading down past the lift to Deception Bowl! Once again the conditions were awesome with the trails being silky soft which made runs quiet! The canyon glades are fun to ski on that side too. Though there were thin spots in all the glades as it the case a most ski areas, they could be avoided but looking ahead! Bretton Woods got a little over a foot of snow with Nemo so that helped.

We finished our day skiing the middle section of BW searching powder stashes on the sides of all the trails. Much of it was cut up but still soft and fluffy so skiing was super fun and it ranked right up there as the best conditions I have skied this season. As some of our group decided to hang it up for the day, we decided to do one more trip to the summit and come down Upper Swoop to Sawyer’s Swoop , non stop making high speed sweeping edge turns that just cut through the snow like butter with a warm knife! That was a really fun run to cap off a great day!

Well the day was not quite finished – Bretton Woods has one of the best decks that just lets the sun is and is great to hang out on. People there had fun and a mini party broke out! 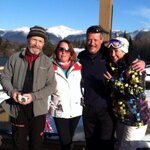 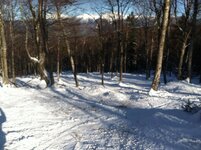 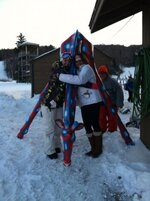 Too lazy to do a separate TR but I was there yesterday and conditions were very good and got better as they got a few inches. A few pics: 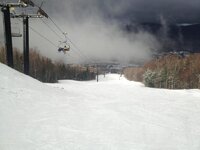 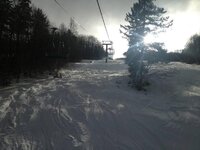 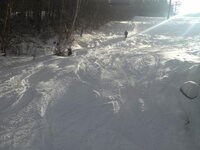 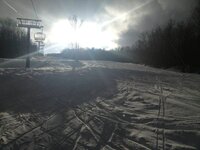