So don't get me wrong the conditions on the wide open trails were carve-able and fast. However, get off to the sides of a trail where the bumps were and they were hard with drifting snow here and there. I did not ski there much. The glades were very hard too but manageable and actually fun. Some of the glades in the Rosebrook area where they open up was really fun to ski since it was bumped out a little but trees were further apart so you could go through a little faster. At the top of most lifts the snow was blown off and it was pretty frozen. As someone noted in another thread, you take what the mountain gives you and have fun with it. That is exactly what we did.

We did work our way over to Waumbek which is the best cruiser there with rollers to launch off and changes in pitch. However that trail was pretty icy in spots and carving was not an option at higher speeds. It was still interesting. Problem with hitting that trail is taking the cross resort trail back with the wind in your face that was painful slow going! After about 4-5 runs we decided to head in for a Tuckerman Pale Ale tune-up.

After our earlier session we than decided to lap Bethlehem Express and Summit Quad to hit up Bode's Run (fast and thinly covered but skied nice - it is a one or two turn slope in any case) and McIntire's Ride (nice bump trail but the bumps were firm so it got a little scetchy). Both times we went from top to bottom and linking up Deception Bowl which skied very nice but the runout was an ice sheet. Luckily, your speed slows down enough automatically so by the time a turn come you can cruise around the bend with enough edge grip. We got tired for the Summit chair and basically were lapping Deception Bowl and a couple runs on Darby's Drop. Darby's Drop had really nice bumps with good rhythm. They were firm but due to the size and pattern skied well! We wanted to hit a couple runs over on the Rosebrook glades so we hit the summit Quad two more times and really enjoyed the mellow glades there since you could ski them with a little more pace than tighter glades. The first area is very easy (RA), a little further down (Two Miles Home) the glades get a little bit more interesting with a little more pitch and takes you into a ravine like area but nothing too bad.

Overall we still had fun and took what the mountain gave use. I think about some of the comment here and I realized that I can have fun at any mountain! As long as I am skiing!

Wide open trails no one there and fast 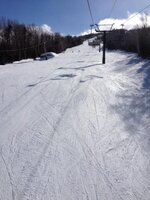 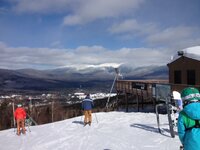 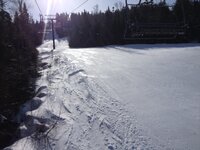 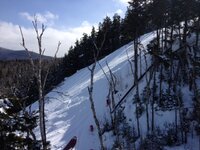 Was at Sunapee yesterday on similar conditions. Warm up where snow gets soft/wet followed by rapid freeze is tough for groomers to deal with.
Sunapee had the additional issue of being fairly busy which made hardback turn to ice quickly. Temps in the low 20s that did nothing to help soften things was icing on the cake.

Still had a good time but conditions yesterday were among the worst I've dealt with all season.
You must log in or register to reply here.