Had a good day at Cannon. I was there a couple weeks ago when they had some fresh powder, but today everything was quite firm and compacted. That made for some fast trails, but also wore me out early. By about 1:30 my legs were toast. All things considered, I like Cannon better on a powder day. It was only my second time at Cannon, and I think the trails there tend to be steeper than what I'm used to, so I didn't pace myself very well. Saw some people from the lift that could really carve at high speed.

They haven't had any deep freeze/thaw cycles yet, so there really wasn't much ice. A few areas were scraped off pretty good, but mostly the trails were hard packed powder that had been groomed flat. They did leave a few bumps along the edge of some trails and on the ungroomed trails.

There was a decent sized crowd in the morning, but not enough to create any big lines at the lifts. The tram looked to be running today, but I think it was the last day of the season for that.

Temps were upper 20's to low 30's, no wind, and mostly sunny. Snow didn't really soften up much while I was skiing, but might have later in the afternoon. Looks like things will be changing to warmer temps there in the coming week. 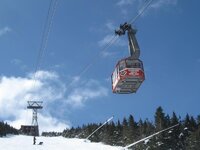 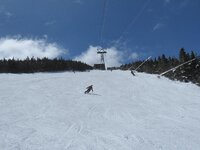 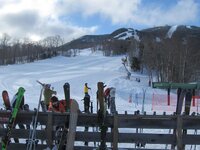 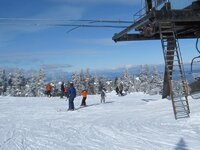 A few more pics. Coverage is still very good and they are close to 100% open. Could see grass poking through in a few places, so it's all downhill from here once the weather starts to warm up. 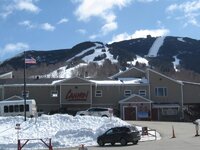 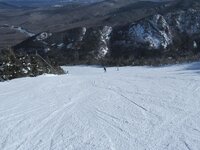 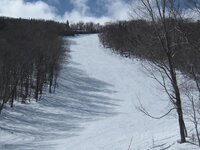 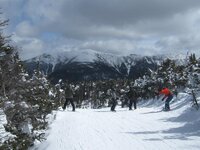 Thanks! I forgot to mention something funny. After I booted up while I was walking through the lodge, I saw a mouse scurrying around in there. Usually when you see one like that, it means there are more in hiding...

But I kind of like the Cannon lodges. They're a little old, but they have a handyman type of charm about them. Also heard a few birds chirping out on the slopes announcing that spring is here. I'm not a big fan of spring skiing, so not sure how many more days I'll go out this season. Maybe will hit Reggae fest at the Loaf, since that's usually a good party.

Great pics! Thanks for sharing.

speden said:
I kind of like the Cannon lodges. They're a little old, but they have a handyman type of charm about them.
Click to expand...

After a day on the slopes it's nice to sit by the fireplace. Thanks for the TR & pics. I'd love to get back up there again.
You must log in or register to reply here.