Originally our plan was to head up to Bretton Woods but that did not pan out so our backup was Dartmouth Skiway. We had never been there and though only one side had skiing we went for it using the Upper Valley Dollar Saver voucher.

We got there and the first impression was that lodge was really nice! However, there was no bar. We got our gear on and headed to the lift that never had a lift line all day. They claimed to have 9 trails open but there were technically 4 ways down. That was ok since we were there to make some fun turns which we did!

The main trails we skied were MBA, and Howard Chevers (blue), Pass-Fail (green) and our favorite Lower Thomas (black). Initially there were a bunch of ski teams training which caused a lot of traffic and technically shut down Thomas. This was a bit of a bummer but we just skied the least trafficked trails. After about 5-6 runs Thomas became available and that was a lot of fun! Up to that point MBA was our go to trail with nice twist and turns and a quick drop in the middle. Howard Chevers was a straight shot and skied nice on the edges but was scraped off in the middle in some spots.

Thomas once available is where we finished the day lapping it the last 4-5 runs. It is a trail though wide had different fall lines which allowed it to be skied differently each time. There were a several whales and some smallish bumps and a few good kickers. I had a lot of fun on that trails for sure. Not that is was that challenging, just that the terrain changed from top to bottom. Technically it skied like a blue at Sunday River. Funny thing - they had a sign at the top of the trail that read "Experts Only".

On the Holt's Ledge side nothing was open but the trails over there look very interesting with more steeps, pitches and fall lines.

Look at the cliff next to Dow Wordon Schuss 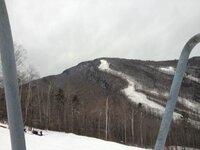 Wife looking at the potential on Holt's Ledge 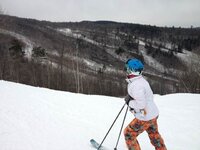 Looking down Thomas wife is the skier below 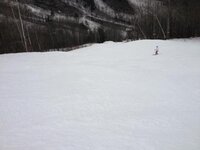 I have been to the skiway a few times in the past. The holt's side is definitely the better of the 2!

We were there for the 1st time yesterday too! Wished holts was open

Holt's definitely gets the cold shoulder, which sucks considering it has the better terrain.

I talked to a couple dartmouth regulars on the lift.....they say the skiway generally makes no effort to get holts open until everything on Winslow is open...and even then they are slow to get going....mid January is when folks thought Holts would start spinning with limited terrain
It really looks great over there..we enjoyed it and a good low key place to go on a holiday week. We'll be back once both sides are up and running
The upper valley deal was nice

Dartmouth definitely on my hit list this year. What is the "upper valley deal"? Is that something buried in the "Skiing on the Cheap" thread? Probably missed it by now anyway but I don't imagine Dartmouth's prices are astronomical.

Abubob said:
Dartmouth definitely on my hit list this year. What is the "upper valley deal"? Is that something buried in the "Skiing on the Cheap" thread? Probably missed it by now anyway but I don't imagine Dartmouth's prices are astronomical.
Click to expand...

Not too buried! A few pages back maybe? http://uppervalley.dollarsavershow.c...ategory_id=326

We are interested in going back to ski the other side. When I saw that I was very interested!

Do they no longer use the Holt's Side for racing? I know that they did when I lived up in that area, but the NCAA told them to do some major regarding of the race trail or lose their certification. I assumed that they did the fix and would be using that side/trail (and make snow over there).

dlague said:
Not too buried! A few pages back maybe? http://uppervalley.dollarsavershow.c...ategory_id=326

Thanks dlague! This link didn't work (it got truncated) but just going to uppervalley.dollarsavershow.com the dartmouth tickets were 2nd on the list. Bought 2 tickets for $45.00

Does this link work? http://uppervalley.dollarsavershow.com/Category.aspx?category_id=326

Thanks for this detail. Haven't heard a thing about this one before a few days ago, but got it on the list now. Sounds very intriguing. By the way, saw the Passion for Snow documentary on Dartmouth's contributions to the sport last week. It's a great hour of TV - highly recommended!

Abubob said:
Thanks dlague! This link didn't work (it got truncated) but just going to uppervalley.dollarsavershow.com the dartmouth tickets were 2nd on the list. Bought 2 tickets for $45.00

Sorry about that! very poor QA on my part - thanks for reposting!
You must log in or register to reply here.