DH parks close and new ones rise up

For those that haven't heard, Sunday River has axed their DH park. They apparently are still toying with the idea of allowing biking on the trails but if they do, they won't be allowing bikes on the Chondi any longer. A shame and sad with the work they have put in over the past several years. I think this decision is being driven by Boyne to a large extent, as it ties into an up coming park.

Loon plans to open a DH park this fall, starting off Seven Brothers and eventually being centered off the Kanc Quad. They (here's that Boyne angle from SR) have hired the folks at The Highlands to build the park out, so they are really investing in the park here. To me, it's pretty obvious Boyne shifted it's summer investment plans.

Back to the Bethel region, it had been rumored for a few years, but it sounds like Mt. Abram is moving forward with a DH bike park. One of the best guys at SR Sports left last year to go to Mt. Abram and part of his reason was the new investments there into a bike park. Glad that sounds like it is coming to fruition.

For the CT DH crowd, Powder Ridge is revamping their trail network. And hosting a race on June 22.http://www.myrecordjournal.com/News...r-mountain-biking-season-with-new-trails.html

Stratton jumps in to the foray with a park slated to open this fall. Will be based off the AMEX chair.

WoodCore said:
Stratton jumps in to the foray with a park slated to open this fall. Will be based off the AMEX chair.
Click to expand...

That's good news! It's a bit closer than Killington. Hopefully Stratton will be able to have service off the top. Here is a map of the AMEX trail system. 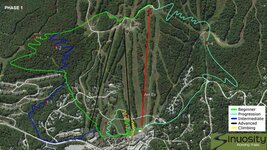