Elk mountain
Arrived to 22F , 0 wind,Bright Blue bird with a few clouds to the West, Groomers were very good except lower part of Tioga, lots of ice but manageble, Tunkanock was a variety of Bumps with bumpy whales , My runs before noon were not as good as I would have liked.Pretty ugly at times back seat and tangled tips, Skiers left had some large drop offs downslope, Clouds moved it around 11 and Sun came back out around 12:30.
Things loosened up very nicely, my afternoon mogul runs improved after I change style a little bit, troughs were very tight.
lifted my up hill ski as I entered the troughs a few other moguls on Tioga Spur were soft earlier.
Ski tracks 18 runs , 14,652 Vert. Max speed ....Fast
Would have skiied longer as things were really awesome later, Been fighting an upper respatory bug.
Whoever is planning on Elk tomorrow is going to have an awesome Day! 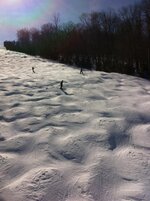 If it was empty I'm sure you saw my friend and his brother! Should have taken off work!

One of my favorite places. Hope to make it back next year.

A couple of tall dudes skiing bumps very well , one guy had bright Orange skiis,
Kudos to the Tele guy in the Orange vest.
http://www.youtube.com/watch?v=xVy-rlzckAU&list=UUv_Cp9vHSmT7Mu31WL8nJmg
Last edited: Mar 7, 2014
You must log in or register to reply here.