Elk was my first ski day of 2013, on one of the crappier weather days of the season to boot. Somehow my friends and I turned it into a great ski day regardless. It was definitely worth the $63 I payed for the full day ticket (we skied 9:00 to 4:00 with about 5hrs 40min of skiing) although I'm sure I could have bought a half day ticket and kept skiing with that, and I probably could have skied without a ticket and the lifties wouldn't have noticed. If they are gonna work in 45˚ and raining conditions I might as well be generous though, and it also makes me said to see when ski areas operate at such a loss.

Onto the ski report.

We showed up at around 8:30 to temperatures probably between 45˚-50˚. It was foggy, drizzling with occasional picking up to medium rain, and very flat lighting. I did not see the sun once in the day.

After we bought tickets we skied the B double (the far right skiers) side of the mountain. Despite the constant rain and higher temperatures, the snow was not too slushy and had been recently groomed. It was great for cruising, which was pretty much the only possible skiing. All the snow between trails had completely melted, so it was evident that the only snow on the trails was artificial.

Somehow 22 out of 27 trails were open despite the weather. We cruised some of the black diamonds and blues on the far-right skiers side, trails delaware, mohawk, iroquois, and slalom (tuscarora was closed due to grass patches across the trail). After staying on this side for a while we went to the quad on the skiers left side of the mountain.

It was more foggy at the summit than at the base so we took the slow winding crusiers from the summit until the visibility increased to the point that we could bomb the steeper runs. By about 11am after 2 hours of skiing the rain had soaked through our jackets and pants (despite claims of being waterproof) and it felt really cold, especially on the lift seats, despite the nice 45˚ temperatures.

We skiied Mahican, Schuylkill, Wissahickon, Lenape, and Tioga on the quad before we went in to lunch. I can't stress that, despite the shi*ty weather, the snow quality was actually great: much better than a crowded january weekend on boiler plate at Blue. The crowds were at a minimum, maybe 50 people there for the day.

After lunch we went to the terrain park where I made an absolute fool of myself falling on the handle tow, and then we decided to brave some of the closed trails. This was the smartest (idk about that ?) decision we made of the day. We also began to have a lot more fun after warming up at lunch. We skied Tuscarora, which I had earlier mentioned was closed due to trail-width patches of grass, which we skiied over (surprisingly easy because of the water). The snow was interesting- in the snowmaking piles it was like snowmaking powder, and very enjoyable.

We finished the day by skiing Chippewa (also closed) from the quad maybe 5 times consecutively. The snow was the same here and the snowmaking powder hills had formed nice jumps. The only problem was the 40 foot wide patch of puddles and grass at the bottom. It had stopped raining and we kept skiing here until leaving at 4. It began to get pretty windy at the summit by like 3:30.

Overall it was a really fun day because the snow was nice, soft and controllable. 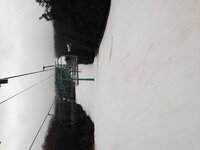 sorry idk how to rotate. must've taken the picture in portrait 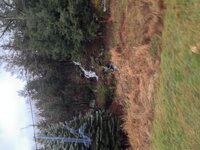 same here- you can see the melting snow with the waterfall. streams like this all over 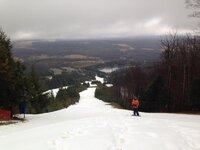 this was on chippewa, if you look down you can see the patch of grass 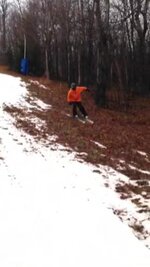 my friend skiing in rentals

Never been to Elk, but have hears great things about it. Will have to give it a try one day this winter!

Nice report. Now I really wish I went last weekend, generally rainy snow is fun it what happens when temperatures drop. Glad you got their and had fun. Maybe on Sunday I make turns their in few weeks. I always buy morning ticket and used it all afternoon the 3 days I skiied there last season.
You must log in or register to reply here.