Had an awesome day at Elk today. I had only heard great things about the mountain from this forum and with this winter storm passing through, I figured it would be the best time to give it a try.

Left my house SE of Philly around 6:45pm for a Holiday Inn off of I-81 10 miles North of Elk rather than attempt to drive up in the snow in the morning.

Got to the mountain after some slow going in the morning around 9:00 am, roads a little sketchy but made it there okay.

Now for the Skiing:

They had groomed a lot of the trails the night before and there was probably 1-2 inches on top so it was nice to ski on. Snow was coming down hard and probably amounted to around 6 inches by the end of the day. I lapped off the double of the Mohawk trail which had moguls on it. A little firm but not bad at all. There was also some thinned out trees next to the lower half of the trails which made for some nice tree skiing with some big boulders near the end with a 4-5 ft drop at the end. I then went over to lap the quad and skied on the trail under it which was also had moguls on it and skied good especially with the new snow.

A friend told me the trees on the skier's right of the Wissahickon trail were good for skiing and I gave them a go. They were nice with easily 2 ft of snow piled up in some parts the woods. Still have to watch where I was skiing as there were some obstacles.

The Seneca Trail under the lift also got an honorable mentioned towards the end of the day as it was left mostly untracked and led to some fun turns around 3:00pm before I left.

Left the Mountain at 3:45 and had an interesting drive down 476 back into Philly through the snow/slush/rain, but nonetheless made it back safe

Overall, an excellent first time at Elk. It easily ranks much higher than any other Pocono Mountain in my mind. Also liked the laid back, no frills atmosphere of the mountain. It is really a skiers' mountain. Will definitely be back.

Sorry for lack of Pics and Quality. Taken on a cell phone and was having too much fun 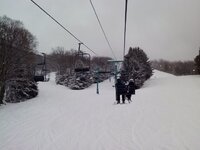 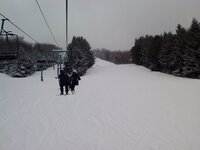 Nice report! I really like Elk and have to hit it at least once this year. Thanks for reminding me haha!
S

Looks good. Elk is the place to be in NE PA.

sounds like an excellent day...way to go get the goods...wish i was there skiing instead of shoveling my GD driveway

Does Elk have terrain parks?

spring_mountain_high said:
sounds like an excellent day...way to go get the goods...wish i was there skiing instead of shoveling my GD driveway
Click to expand...

Sucks. Hopefully this winter has a strong tail end with a bunch of storms.

Twism86 said:
Does Elk have terrain parks?
Click to expand...

Elk has two terrain parks, the one main terrain park has a cable tow next to it with a bigger jump for the first hit with a some rails, rainbow box and some other stuff. They also have a little beginner park too, near the lodge.

If you were choosing the mountain based on parks, Blue or Camelback would be much better IMO, but Elk is still much better than the other Pocono Mountains around NE PA
You must log in or register to reply here.