Best day of the year by a long shot. I arrived around 9:30am, which is as good as I can do on a day trip from western mass. I also like sleep. First time out this year skiing solo, and my mission was to hit the woods whether they were open or closed; whether they were full of powder or barely skiable.

I figured this would still give me more than enough time before my legs gave out. I'm still working on my stamina, at least compared a couple seasons ago. Maybe I've just been getting tired of skiing ice. Turns out something worse than fatigue would cut my day a little short..

So I took no time to hit the lift when I got there. Took two chairs straight to the top. Choices being Black Diamond, FIS, or Rim Run off the top. I took Rim Run first time down, then I think Elbow and Cruiser. A nice blue run to get my snow legs. I found out immediately that the snow conditions could most accurately be described as:

Literally almost every kind of snow going on at once. Supposedly they got 10" of snow last night. From what I heard today was *the day* to be there. But the 10" they got last night was definitely some fluffy stuff and not exactly forming a solid snowy base over the frozen surface beneath.

Base depths were really good, actually. But on top of about 20" of snow was a layer of freeze-over. And then whatever fresh snow on top of that. So I took more runs on blues and blacks mostly off the North Ridge chair, as this chair seemed to offer the best access to the most open terrain without going all the way to the bottom of the mountain. Basically terrain off this chair was fully open. Stuff at the bottom was half and half.

Due to the powdery-then-icey nature of the surface, I found that the best way to adapt was to make shorter turns, control my speed better. I put more thought into my pole plants than normal. Turns out my skiing was pretty good (I thought) and the icey patches weren't really too daunting. But my legs were getting tired already.

So one more time up I looked to the left of North Ridge chair and I saw what looked like some really solid woods. Steep, but really snowy with at least a couple good lines already tracked out, and other lines untracked.

So I went in there. OK this is what I came here for! And it was amazing in the woods. The snow under the trees didn't even seem like it got frozen over at any point. I could stick my pole in 2 or even 3 feet in some places. I wished I had my powder baskets on the poles, as they were doing me literally no good in such deep powder. But once I found out how unusually good the woods were, that's all I skied.

The powder was light and fluffy. Not "powder" that you can't turn though. Since it was only day 2 open there were a lot of untracked lines in the woods. Bushes were covered with pillows of powder. I skied some of the coolest snow pillows of my life. Like, bush to bush to bush to bush just skimming the tops of them.

It kept snowing all day so conditions actually improved a little over the course of the day. By 2:30 or so I knew I was starting to have problems. I had been having some trouble breathing all day. I have asthma which only happens in the cold for whatever reason. I started gasping for air a lot and getting tired really quickly. This was no good, and my legs were getting really beat from skiing steep woods all day.

So, one more chairlift up. I noticed that I had forsaken upper FIS previously, and figured this would be a good last run. I basically hucked off the top of it because it looked pretty snowy. Found out reaaal quick FIS was totally glazed over. Due to the lighting it was impossible to see what was packed powder and what was ice. So I stopped myself as quick as possible and took to jump-turning down pretty much the whole thing.

After that I was so beat up, barely made it back down to the lodge. It was 3:00pm or so, which I figured was an acceptable time to leave.

Just got back, popped some photos on FB (public gallery check em out) and sat down to write this.

Nice! Variable conditions can be an ass kicker...

Glad to hear you had a good day at Mt Ellen. I was on the mountain early this AM and got in a few laps on Bravo and Exterminator while they were still pretty fresh. My guess is that you were in Exterminator Woods if you went left off the North Ridge chair.

Hmm.. actually first woods I took was skiers right off the North Ridge chair. I got into Exterminator woods a bit later on. Actually I'm not sure which side is which... sort of dyslexic like that.. but I skied both sides as well as some others.

I skied more woods than last time I was at Mt Ellen (last spring) although the woods were total heaven at that point. When I go back later in the season I will have to check out Airline. I have always known Sugarbush for it's woods but am just starting to get aquianted with Mt. Ellen

The picture in the gallery of the real steep entrance to some woods I believe is Exterminator woods.

As always I appreciate Sugarbush policy of not really roping things off unless they are totally unskiable. Most other places would have waited to open FIS and roped off half the woods. Not Sugarbush! If you want to ski it, go for it
Last edited: Dec 23, 2012

Nice Pics!! Looks decent down there. I like the narrow passage between the rock!

I have never been on Mt. Ellen. Looking forward to trying it out this season.

Mt. Ellen is a real classic. You can ski mostly everything in one day if you really wanted to. The area has a real nice vibe. Never crowded. Relatively cheap tickets. And a sort of huge vert with excellent runs.

That said, if Mt. Ellen weren't sandwiched between two such amazing ski areas, I think it would be a lot more popular. It's got the biggest skiable-in-one-run Vert of anywhere in the east besides Sugarloaf. Unless you want to count the flats at the bottom of Whiteface. The lodge is fairly basic. Okay, really basic. The lifts are sort of slow. It's just a sweet mountain to ski.

I look forward to hearing how you enjoy it.

Nice TR. "North" was my home mountain for a long time. If you think the lifts are slow now then you can only imagine what it was like under ASC when they got the brainwave to move the existing GMX, make it North Ridge, and install a slooooowwww quad (now Jay's Metro Quad) to the bottom of the Slide Brook/North Ridge Lifts. You needed three lift rides to get to the top then. The two HSQ's make for fast skiing, but the Summit and Inverness Lifts can be slow.

FIS: love it. Stick to skier's left most of the time for drifted goodness. Launching off the top, um, yeah. I bet you had to change your underwear after that.

Biggest irony about Ellen is that Sugarbush re-engineered it to handle crowds it never sees. Quad lifts, wide trails, huge parking area. But never anyone. Not that I'm complaining....

And yeah I've come across that rock a few times.

I wouldn't say "launch".. lol. More of a little huck off the top right side. Guess I had it in my head, last run of the day I was going to try to do it in style.

And yeah I almost grew a tail real quick upon realizing I landed on some steep ice. Probably not one of my slickest moves on skis.

Everyone else on FIS was sticking to skier's left, which made more sense if you weren't asking for punishment.

That is the info on the Pricechopper book pass for ordering online includes Smuggs for $150 for 3 tickets can be used on Sundays thur Friday not Saturday or Holiday weeks, plus other benfits that are even advertised.
G 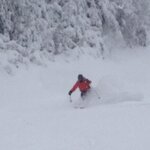 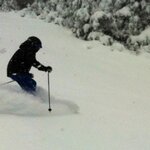 Here are 2 iPhone pics from MT Ellen on Saturday the 22nd right after Patrol dropped the ropes for the very first time on Bravo & Exterminator. There were no skiers or riders to speak of all day.

Scotty said:
That is the info on the Pricechopper book pass for ordering online includes Smuggs for $150 for 3 tickets can be used on Sundays thur Friday not Saturday or Holiday weeks, plus other benfits that are even advertised.
Click to expand...

OK. Do they have deals for Mount Ellen too?
You must log in or register to reply here.