Well, I finally hit one. Years of planning trips ahead and showing up to find only ice or rain. We finally got some payback. I had booked a couple of days in a ski in/out condo at Jay a couple of weeks ago to spend some time with my oldest son skiing while he was off from school. We got progressively more excited as we got closer and the weather forecast got better and better.

We were kind of surprised when we got up Friday morning and there was no snow. But it started to snow soon after and quickly turned into dumping snow. It snowed hard all day Friday and the skiing just got better and better throughout the day. We hit most of the glades on the mountain; Timbuktu, Kitz woods, Everglade, Vertigo, Canyonland, etc, etc,. All were good but got progressively better as the snow started to pile up. I would have more pics from day 1 but the camera I took them on broke during the weekend and I can't retrieve them.

Saturday was windy as predicted. They didn't run the tram or the Flyer lift but I give them a lot of credit for keeping Jet and Bonnie spinning all day. Even just those two lifts gave you a lot of terrain to ski. We lapped all of the glades from those lifts all day. As much as I love the glades I have to say that the runs of the day were the open "regular" runs. Jet trail under the Jet lift gave me a couple of the best runs I've had in years. Soft, carvable snow all the way with some bumps mixed in. UN right next to it was one of the better bump runs I've skied recently. The mountain was busy, especially because of only having two lifts. But other than 2-3 times where we had to wait 15-20 min, it was manageable after that, less than 10 min in most lift lines. Lots of french being spoken in the lift lines at Jay.

Sunday was great again. Flyer opened, tram closed all day. We did mostly "greatest hits" from the previous day but added Beaver Pond and Andre's glades as trails we hit on Sunday that we hadn't skied before. Both still had DEEP snow in them and were great glades.

We have CHAD ride & ski cards so we skied Friday & Sunday on half price tix, $10 off on Sat. That was a nice bonus too.

I would say we were VERY lucky to get this storm as once the snow got skied down it revealed a lot of icy patches underneath. I am guessing that prior to Friday the conditions were less than ideal and this storm was a huge win for them.

Been too long since I have been to Jay; great mountain.

Pics (a lot of these are "I think that is this glade" in that it's hard to remember now which glade I was in when I took the picture): 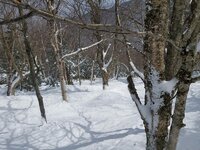 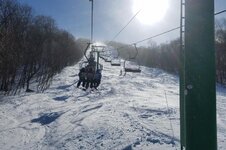 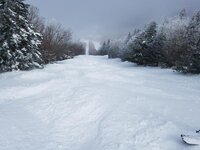 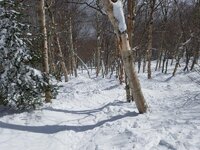 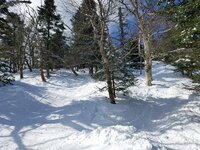 I've spent a lot of time on the Jet..never got bored...wonder why the Tram was down Sunday..windy?

I think this is Everglade: 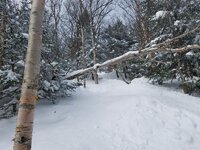 This may be Vertigo: 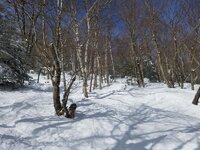 kingslug said:
I've spent a lot of time on the Jet..never got bored...wonder why the Tram was down Sunday..windy?
Click to expand...

Wind was still pretty strong in the AM.
M

And a Blue Bird day to end it. I always miss the significant storms by a day or two. Congrats!
You must log in or register to reply here.