After coming off a decent day at Cannon, we visited Cannon’s nemesis – Jay Peak! I found this to be a great skiing combo! After skiing Cannon, we headed up to Jay Peak to spend the night and scored a great deal on a trailside condo that included tickets to the waterpark. My wife and I are not huge fans but what the hell! We tooled around the “activity river” and I went down a few slides with my son. My wife and I hung out in the outdoor hot tub for an bit then went in to hang at the Drink. However, before we went to dinner, I had to try La Chute – holy sh#^! It is short and pretty damn cool! We ended up changing and went to The Foundry to eat – always like the food there and the price is right!. We noticed that all of the restaurants were pretty busy which lead me to think – look at how many people are spending money on F & B. The arcade was filled with kids, people were ice skating and their General Store (Provisions) has hoping like an event! Lots of people this late in the season - cha ching! Another thought crossed my mind “lift lines”!

In any case, we were there to do the sunrise service at 6 which meant that we would have to get up at 5 which we did. And technically, our first run was at 5:20 am as we skied down to the Tram – cool! We attended the service and it was packed! It was a mix of locals and visitors alike, skiers and non-skiers, people interested in the service and those who were there just for the 7 am run! We were there for both! Knowing lots of people were taking the run we positioned ourselves ahead of the pack! My older son’s goal – to poach a trail since they set it up for a single run down dotted with ski patrol. Well he succeeded and hopped on to Expo Glade and ended headed down through the park. We followed the designated path (I know boring!) and headed back to our condo for a light breakfast and chilled until the lifts spun at 8. I have to say, Jay Peak did it right – rather than grooming at 8 or 9 at night, their groomers were attacking the mountain at 5 am after everything hardened. We skied very nice corduroy. It was around 21 degrees when we first stepped out and conditions were winter like everywhere they groomed and super hard in the woods!

When we headed back out, my 18 year old was committed to the woods – all he ever does at Jay! He told us what his plans were and my 11 year old piped in and said – I want to go! He will board anything! I went into the woods at the top of Beaver Pond and it was pretty hard and opted to bail and stick to groomers until later in the morning!

My wife and I lapped Flyer a few times taking Ullr’s, JFK to Wedemaster, Northway to Goat Run to GMB and Northway to Goat Run down Lower River Quai and Northway to Goat Run to lower Goat Run. Every one of those combinations was fun since conditions were very fast and firm with very nice cord! Sometimes I really enjoy just plain cruising! There was not a bad spot on any of those runs! We then took Northway over to Angel’s Wiggle and lapped Bonnie a couple of times on runs like the Hell’s Crossing and the lower section of Northway where we skied over to The Jet Chair cutting through Stateside Glade (a very easy glade but fun to cruise through). Off the Jet Chair we skied The Jet, Haynes and Derrick Hot Shot before returning on Montrealer! Every one of these trails had softened up perfectly and we had some of the best runs of the day off The Jet Chair. From Montrealer we headed to Angel’s Wiggle to Taxi and back to Alice’s Table for Easter Brunch. We felt like we did a boat load of skiing in a little under 3 hours! Remember my thoughts regarding lift lines from the night before? Well, they were nonexistent! It was ski on ski off all day! Did I mention that we had bluebird skies? Yup – it was beautiful!

They had and Easter Brunch running at two of the restaurants each having different menus. The food was pretty good. While waiting for our kids my wife and I chilled outside on the patio and I had a Tram Ale and he had her Bloody Caesar basking in the sun! When we started eating, I happen to notice Ary of QBurke fame who later was accompanied by his father and later Bill Stenger. There was another couple that they appeared to be having nice with! I digress! The food was good and the only complaint was that there appear to be less of it (variety) and the price was higher than in past years!

When we headed back out, we decided to try some glades and we also wanted to hit up The Jet chair. So we took jumped on Flyer and headed over to Beaver Pond Glades. Typically the entranced is very bumped out, but it got somewhat flattened which was nice for my wife. This glade opens up nicely, however, there is a smallish ravine in there so stay further to skiers left or higher up closer to the trial to exit earlier. I experienced this on a powder day – not this day! The other glades we skied were Expo Glade and the lower section of Timbuktoo coming on from Derrick Hot Shot. By the afternoon all glades appeared to be in great shape – some spots we experienced a weird sinking feeling that was a little sticky but that was in flatter areas. We had hoped to ski more but the groomers were getting leg burning soft and the Queens Highway run out (which sucks) was getting slower by the minute which where the condo was. We decide to call it a day and another perfect spring skiing day it was! We headed over to the Drink for a drink while our son got some last minutes splashes in!

Between Cannon and Jay Peak in one weekend, I could not have asked for better. The total cost for both days was $51 per person. We used The Ride and Ski Card on Sunday (2 fer) and a gift card at Jay Peak ($22 each) and Cannon had spring pricing at $29! What and awesome weekend for this time of year (111 trails between the two to ski on)!

Everything is looking great - check it out!

Check out the sky color! 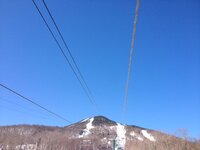 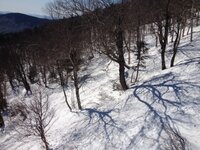 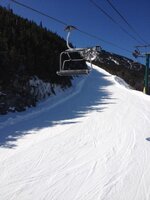 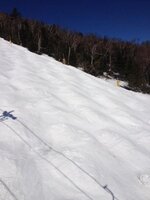 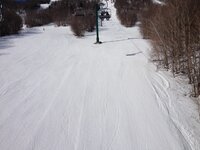 Wow, it looks friggin great up there!


Sent from my iPad using AlpineZone

It was - bluebird winter like conditions in the AM and warmer and spring like in the afternoon. Two seasons in one day with great coverage on all open trails!

Can Am bumps were indeed massive. I wish they let it go like that all season

MadMadWorld said:
Can Am bumps were indeed massive. I wish they let it go like that all season
Click to expand...

I was pissed that I never got around to skiing that trail - it was top to bottom and side to side with no groomed path like some places do. It looked pretty sweet!

dlague said:
I was pissed that I never got around to skiing that trail - it was top to bottom and side to side with no groomed path like some places do. It looked pretty sweet!
Click to expand...

I was with my wife, so I didn't ski it either, but I really wished I could have skied that little ribbon of bumps under the top section of the Bonnie. That looked like fun!

Savemeasammy said:
I was with my wife, so I didn't ski it either, but I really wished I could have skied that little ribbon of bumps under the top section of the Bonnie. That looked like fun!


Sent from my iPhone using Tapatalk
Click to expand...

Ya - Can Am. I was doing this trip report and got to that picture and thought "Damn forgot to hit that!". Very consistent, not too tight!

I was referring to the section under the lift, rather than Can-Am proper. I know it's called lift line further down. Maybe the upper section is also called lift line? Either way, it looked like a fun run. I have a thing for narrow trails

Got it! Yes that did look interesting!

dlague said:
I had to try La Chute – holy sh#^! It is short and pretty damn cool!
Click to expand...

Who knows? We might have seen each other after all waiting to be dropped?

3 days at Jay, 3 après-ski days of climbing stairs at the Waterpark with and without a tube. 8)

MadPatSki said:
Who knows? We might have seen each other after all waiting to be dropped?

3 days at Jay, 3 après-ski days of climbing stairs at the Waterpark with and without a tube. 8)
Click to expand...

You have to admit there were lots of people in the waterpark, in the restaurants, at the apres ski party over on Stateside and even people ice skating. Apres ski things to do seemed busier than actual skiing! Although I did not ski there Saturday - only Sunday.
You must log in or register to reply here.