We decided to hit up Jay Peak this weekend for some true Spring skiing! The forecast called for bluebird skies and temps around 70 degrees. As we arrived it looked very promising with many trails covered in the white stuff! We arrived around 10 and headed straight up on the Tram with the intention of heading down Vermonter. However everyone seem to have the same intention so we decided to head down Northway over to Goats Run then down River Quai and then Interstate. One of the first things we noticed after skiing Killington, was that the base, though soft, was not as water logged! Unfortunately Killington experienced a storm the night before we were there last weekend! Goats Run and River Quai actually skiied really well! Flatter trails seemed sluggish!

Our next run was down Vermonter with the goal to head back to the the Tramside for a beverage! Vermonter was bumping up due to traffic and made it fun to ski! The tough part was when beginner skiers panic in the middle of narrow sections? Which begs the question - If a sign says "This lift services Intermediate-Advanced to Expert trails only", why do beginners think it is safe to go any way?

Anyhow, we crossed over on the bottom of Montrealer, Angles Wiggle, Taxi (dirt patches) then down Queens Highway. Got the Tram Lodge, took gear off go to walk into the Tower Bar and "WHAT?" closed! We ended up hiking over to The Foundry where the Hotel is.

We always like the flatbreads there and the prices are good too! It was nice sitting on the deck with ski boots on and no winter gear! It was a t-shirt kind of day! After eating and a couple of beverages, we decided to go at it some more! So we headed over to Flyer!

Wwe then lapped that chair four times splitting time between Green Mountian Boys and River Quai paths down. GMB was nicely bumped out with plenty of space on the upper part and they tightened up on the lower and steeper section! They were soft and each run felt like a super fun work out! River Quai was not bumped out but it skied fairly fast for Spring conditions and my skies carved nicely down that run! My wife was wiped so she headed over to The Drink to order us some drinks (Ha sounds funny) while I opted to make one last full charging run down GMB and that was a blast! That drink hit the spot once I was back down! BTW my wife surprised me with a pair of ski boots that she picked up for 50% off at their ski shop!

We never made it over to the Jet side - always popular even with a slow chair! There appeared to be a line from a distance and you had to walk a stretch to get there so we skipped it!

It was a great REAL Spring Skiing day and the kids stayed home! We love Jay Peak and enjoy every trip there! Their rates were $55 for the day but we used the Ride and Ski card (2 fer based on full price) and skied for $34.50 - that worked!


Looking forward to some May skiing! 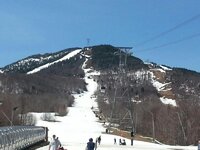 Nice report, look forward to more pictures.
You must log in or register to reply here.