We had a visitor from back east for a three day weekend. He really did not care which mountains he skied at and let us pick the places so we kept it in a tight cluster along Route 6 around Loveland Pass.

Day 1, was spent cranking out fast runs at Keystone. We had limited time not getting there until 9:30 and having to leave at 2. I wanted to give a pseudo tour so, we worked our way to Outback then back to the front side. It turns out that those runs were really firm corduroy. While the front side runs were firm too when we were first there, by the time we got back they had softened up nicely. Frenchman was very fast and with hardly anyone on the trail, we did not hold back. In fact, we had so much fun with that, so we then ski Wild Irishman, Sante Fe (lower section had nice soft bumps), Paymaster and Dutchmen with the shortest of those runs being 2.1 miles. We did stop for our own packed lunch and beer. While eating we looked at our stats for the day and decided that we can knock some good numbers so we decided that was would should shoot for distance and vertical since River Run Gondola provides runs that cover over 2000 vertical feet and runs over 2 miles long. The last hour and a half we just went for it nonstop lapping the Summit lift and the Gondola, ski on ski off. They are both quick rides for the distance covered. We also took a trip over to Peru Express to show him Area 51 to complete the tour. Over all, it was a quad burning exercise and in the end we covered 27.2 miles and 24K vert over 15 runs.

Day 2 was more about experiencing different aspects of Loveland. Our first runs were very firm once again. We over heard that the runs off chair 6 were skiing good so we skied a few runs there but that got kind of boring so we went to chair 4 skied a traverse over to the area serviced by chair 8. The snow had soften nicely and the runs were skiing great. There are some nice trees there so we gave it a shot but being shaded it was still too firm in the woods. We then headed back to Ptarmigan lift for a couple runs before eating lunch. After lunch we decided to head up chair 9 to the Continental Divide. After doing some touristy stuff with our visitor (a group selfie with A Basin, Keystone and Breck in the background), we skied Patrol Bowl which had really softened and loosened up. Snow was heavy but skied good. Love the pitch there, while it sketched out my wife a bit she recovered and skied it well. We then went down Headwall #4 which was fun but short. We then decided that the runs under chair 1 should be good so we skied Avalanche Bowl to Holy Cat – well, it was still pretty firm but starting to get soft but it was one and done for now. The boys took off for their own runs then caught up to us on Ptarmigan where we did one more run before my wife called it a day. The boys and I, decided to go back to chair 8 to hit the woods and on the return ski the bumps under chair 4. The woods softened up perfectly and were a lot of fun then we skied a fast run to catch last chair at chair 8. From there, we then traversed over to the bumps at chair 4 where we had what was probably the run of the day. Bumps were super soft, had good rhythm and nice pitch. Once again, we wanted our visitor to experience all angles/aspects of Loveland since it is so wide spread and visible from everywhere. We hit every lift, and skied a wide variety of terrain. Our visitor left wanting to explore more. We ended the day, with a couple IPA’s and some Bluegrass and sun on the deck.

Day 3 – For our friend, there was much anticipation and excitement about skiing at A Basin. We talked it up a lot and told him how it was our favorite being more old school and being able to slice it up any way you want – like your own canvas. To kick things off my wife made a huge Easter brunch, packed it up and brought it with us. When we arrived, we were not hungry enough so we skied Montezuma Bowl for about an hour. Being that it faces south-ish, the snow was in great shape. We started off with a few runs on the groomers which were fast and very fun. We then skied Long Chute which was skiing well so we then did one more run where we came off Zuma Cornice and skied around the area called Groswald where the sun was really doing its magic. The snow and bumps were really soft and skiing was feeling really easy. We then went back and skied a top to bottom run to get back to the lodge swinging through North Fork for the fun of it. After Brunch and a couple beers we headed out to ski Land of Giants (skied really good) and East Wall (a bit crunchy but skied decently). After that we skied a couple runs from Cornice Run - boys wanted to drop from the Cornices while we went down West Wall and Knolls. West Wall had nice soft bumps forming which were a lot of fun. We then went up on Pali Lift and my wife and I skied Nose while the boys jumped from Pali Cornice and skied Pali Main Street. It sounded a bit firm for my liking and they confirmed that when we met up later. Now that we had covered all the areas for the most part, our friend and our son went and played over in Montezuma Bowl and Land of Giants (they liked the cliffs there). My wife and I decided to lap Lenawee Lift on runs like Falcon and West Gully which were in great shape. On our way back to the base, I skied Ramrod which had really nice soft bumps but I felt I needed more so my wife went in and I did a top to bottom run on my own full on which was a blast cutting through an unnamed glade then topped it off with a mix of Upper Ramrod then High Noon. High Noon was developing bumps that were fun to pop off. Touring around A Basin made me realize how much fun the place is. While the stats say there are 109 trails, you can get a whole lot more than that out of it.

This was a great weekend with perfect spring conditions. There was the typical refreeze every morning that softened up by 10 or 11 every day and skied great to closing bell – well until 2 at Keystone. Out of the three A Basin got our visitor’s thumbs up, however, he enjoy all three. 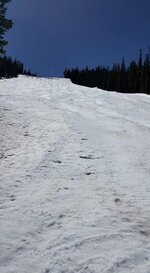 Looking up at Area 51 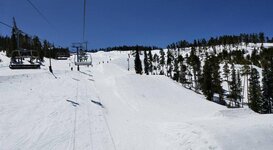 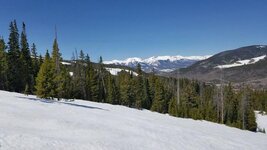 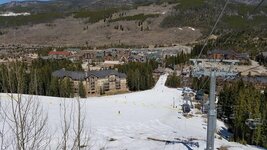 We skied through some trees and ended up on another trail that was actually closed. Most of it looked good with the exception of this! This would have been still open back east, 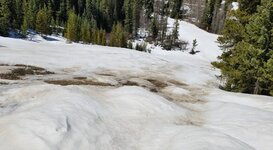 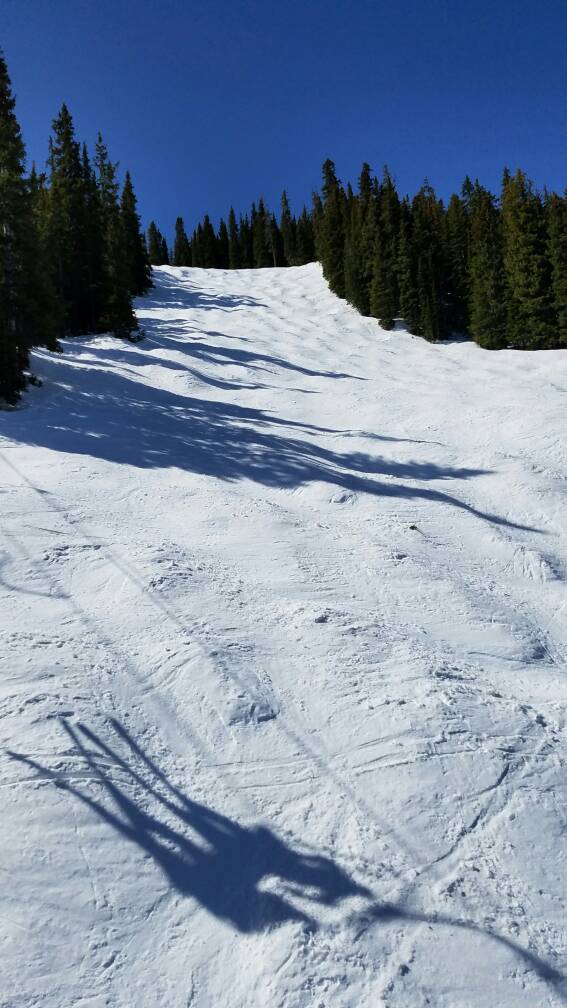 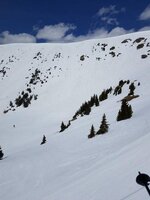 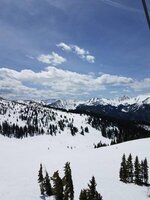 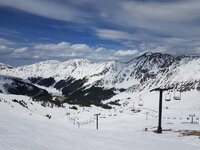 Son about to drop in from Cornice 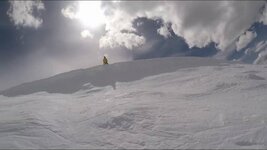 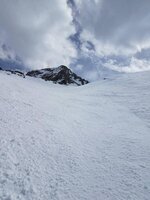 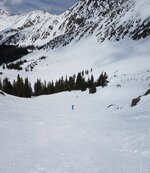 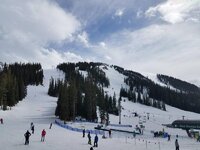 Looks awesome.
You must log in or register to reply here.