Firm and fast conditions at Killington today. Cold too. I layered up in the morning and stayed that way even when temps crept up a little in the afternoon. The place was pretty deserted, so I had my run of the place. Lots of stuff is roped off, but there were plenty of open trails too. Looks like they are stockpiling a lot of snow for the holiday masses.

Got my first look at the new six pack lift on Snowden. The thing has some quirks. First time I loaded onto it, I was on the far left. It's a side load, so as the chairs go around the bullwheel, the far left part of the chair is moving fast while the right part of the chair is barely moving. The chairs have a protruding plastic thing on the ends next to the seat that ended up bashing me right in the calf muscle. The chairs are really heavy, so my calf came out on the losing end of that encounter.

The lift seemed to be stopping a lot. I think I only had one trip on it where it didn't stop during the ride up. When it stops, the heavy chairs bounce up and down quite a bit. On one trip the bubble cover came down by itself in the middle of the ride. One time I pulled the bubble down just to see what it was like, and it seemed to lock in the down position and I couldn't raise it up again until the unload. The unload at the top is annoyingly flat, so you can't get any speed when you unload to get to your trail. Last weird thing is some of the towers seem too short. There were places where I skied under it that made me feel like I should duck to avoid hitting my head on dangling skis. It's not actually that low, but I think if you reached up with a ski pole, you could touch people's skis. On the good side, the new lift is much faster than the old lift. Here a pic of the flat unload area: 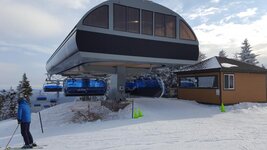 I was also curious about the new tunnels. For the most part those are a nice improvement. I thought they might be a big eyesore, but they aren't too ugly when they're all covered in snow. The one in the middle of Bunny Buster is set at a sharp angle for the Great Northern skiers. You need to make a sharp descending left turn to get in to it, and then it's surprisingly steep inside. I think quite a few beginner skiers take Great Northern, so that could be entertaining to watch on a busy day. 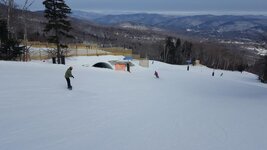 Going over the top of the tunnel is nice. You are kind of elevated above the normal terrain, so get a little bit of a birds eye view of where you want to go. 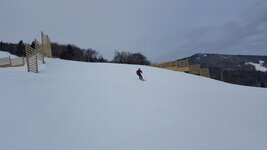 One thing they seemed to have goofed a bit is how they funnel upper Chute over to Bunny Buster to share the tunnel bridge. I was cruising down Chute, and where the funneling happens, the old trail is still there that goes straight, but is roped off. So I felt like going straight, but couldn't, and you have to take this kind of sharp right turn double fall line connector to Bunny, and then have to make a hard left over the tunnel to avoid skiers coming down Bunny. So the connector felt like kind of a hack and messes up the flow of Chute.

The work on the South Ridge quad lift is still ongoing. I think that will be a nice lift when it's done since there are some good trails in that area. There's a lot of snow over there now, but most of the south ridge trails were roped off today. Here's the current state of the upper terminal: 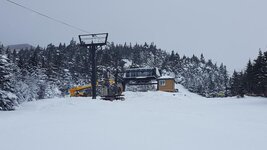 I wasn't expecting it to snow today, but in the afternoon some kind of localized squall moved in and down came the flurries. It wasn't enough to do much though. I stuck mostly to the groomers today since the snow was so firm. I did a few bump trails, but they were too firm for my taste. They might ski better with the warmup that's coming the next few days.

That is weird about the stops. That doesn't sound rite. The lower chair lifts are more wind resistant, so they probably built it as low as possibly. Thats probably why the superstar quad and Bluebird are too low to ski under in a few spots. I have definitely had trouble on other bubbles lifting them up. I think some of them require help from the terminal to open.

I got my warmup laps on Bear. Nice groomed carpet. Vertigo, Ovation, Northstar all skiing surprisingly well. The natural snow has bonded pretty well to the ice sheet underneath the past few days. I can't explain why. There's still some death ice here and there but overall a much much much more consistent surface than last Friday or Sunday. Mid-winteresque. We are a foot of snow away from great conditions...the base is deep, primed, and ready. As stated K had maybe 1,500 skiers today (including a couple hundred for PSIA). Place was dead.

I was there Sunday and today, so 2 days with the bubble for me...maybe 15 rides up....15 rides down on Snowdon. The traffic flow has improved in spots but it worse in others. Mousetrap is now rated intermediate...it totally is not...lots of people having trouble...can't wait til Jerry and his family that skis 4 days a year tries that "blue cruiser" next week over the holiday. You can cut over from Chute/Bunny after the tunnel onto Conclusion/Highline, requiring a near-perpendicular traverse across Great Northern. Quite dangerous. The Chute/Bunny intersection is really abrupt. The tunnel its self is 3/4 of a trail wide. So the two trails funneling onto that was not fun on Sunday.

This all said I still say it will be a net gain for K. Next weekend will be the real test as beginners start coming out of the woodwork.

benski said:
That is weird about the stops. That doesn't sound rite. The lower chair lifts are more wind resistant, so they probably built it as low as possibly. Thats probably why the superstar quad and Bluebird are too low to ski under in a few spots. I have definitely had trouble on other bubbles lifting them up. I think some of them require help from the terminal to open.
Click to expand...

For one of the stops I was near the upper terminal, and we could see an engineer up in the lift wheel housing unit pressing buttons to get it going again. So it seems like they are still fine tuning things. There wasn't much wind yesterday, so it probably wasn't wind sensors that were causing stops.
You must log in or register to reply here.