Quick hitter today...was going to go up early and get back but ended up being lazy and meandering around the house so left late and got there around 12:45. With a small amount of time, I kind of jumped around everywhere but got a good 3.5 hours in.

Parked at Skyeship and first run was Skyelark plus the woods between that and Superstar. Actually a little slick in there...probably some of that base building snow from Superstar iced over in the woods but definitely the most slick under foot woods I skied today. Skyelark was skied off (most groomers were today...place was busy and lots of beginners).

Next up was Julio. Pretty loose snow, a little sticky plus a slick spot or two but a great run overall. Rock garden was poking through a bit but found some clean lines without having to look too hard.

Headed to the new Six next for the first time. Seemed to be running slow to me but not sure if that's normal or not. Took a run somewhere near Patsy's...not sure if I was near the sign but that whole area skis the same. Snow was nice and deep...kind of corned up near the bottom but very nice the whole way through.

Headed to the Throne next...was a bit nervous as Royal Flush was trashed based on what I could see from across the basin. But Throne was terrific. Sure, a few bare spots but nothing extensive and the mashed potatoes provided sweet turns. Best run of the day I'd say but not going to last very long in the late March sun. Across the basin Cascade and Downdraft looked slick...saw about 6 straight people come flying down Downdraft on their ass.

Turned towards Bear next...completely forgot they put in the South Ridge lift. Took a run down Jug as I don't think I've ever taken a run over there. Jug was soft with some bumps...very thin near Jug Handle. Was going to ride the lift as I never rode the old one but decided there were better things to do with my limited time than ride the old Slowdon Quad so continued down Falls Brook.

Did a quick OL run...corned up and enough push piles to get some turns in but very skied off and a lot of people snow plowing down. Headed back up (the Bear Quad has the 2nd most uncomfortable chairs after those ugly metal things at Berkshire East) to Centerpiece. Nice and soft for the most part and a fun glade. A little boney and tight at the bottom but not too bad.

Hit Skyeburst to Skye Liftline next. Skyeburst was slick just about everywhere. Liftline was nice and soft with the occasional short bumpline. Next run did Thimble which was solid bumps with softer snow between...quick return to winter just buy skiing the other side of the ridge. Lower Needles was the best groomer I skied all day. Kept the liftline tour going with Stitchline next. Top was closed for some reason. Open past the bottom of Panic Button...pretty slick but a few soft bumps.

Had 30 minutes left at that point so did a few quick runs off Superstar. Bittersweet was a mess down to Skyebits which was surprisingly really good. Was expecting it to be a skied out disaster but probably had the softest snow I skied all day.

Juanita was next...most of it was very nice like Julio. The bottom was a lot bonier and there was no obvious good line so I traversed a bit and found a nice soft line that dropped down to Flume...nice to score that instead of skiing over rocks.

Took my daily death run down Superstar next...right from the beginning, getting onto the glacier required skiing a chute that more resembled a bobsled track with no control. Rocketed onto the headwall which luckily was in good shape. After fighting through the masses coming down Launch Pad, it was slick the rest of the way down. Should be thawed out and soft by June though

Last run was Great Eastern to Homestretch to Valley Plunge. Plunge was pretty sweet...nice and soft and all open except the very last pitch (not sure why...it had better coverage than the pitch above it). Love finishing up with a good Plunge run.

I'd say the days of "ski season ends after February Vacation week" are done. Very good crowd and lots of beginners so even the never evers are coming out for spring skiing now. Downtown Ludlow had a good backup and there was a pretty ugly motorcycle crash by the railroad tracks at the edge of town which caused a large backup...hope the guy who was down on the road is okay, it was hard to tell. Lots of traffic on 91 from the north and a steady stream merging in at exit 2 as well so obviously all the ski areas are having a great March crowd wise.

Hopping on a plane to SLC on Thursday. Planning on Brighton for the rest of the day when I get there, then up to Jackson for the weekend. Then coming back for LCC the last 2 days. Forecast looks good...maybe even a powder day to start.

Zand said:
Hopping on a plane to SLC on Thursday. Planning on Brighton for the rest of the day when I get there, then up to Jackson for the weekend. Then coming back for LCC the last 2 days. Forecast looks good...maybe even a powder day to start.
Click to expand...

Nice TR- have a great time- looking fwd to some TRs....maybe with pics?

Re: Valley Plunge - not a coverage thing but there is concern if someone eats it they will end up running into the lodge. Very very rarely the last pitch is open.

The 6 pack was humming on Friday. Have not compared ride times of SR Quad to the old triple but the ride now seems much quicker due to not making the turn.
Last edited: Mar 25, 2019

Surprised about the amount of icy stuff..didn't encounter that at all until very late in the day at Stowe..even then it was fine..except the entrance to liftline which is always a sheet.

Just before the storm was a big thaw freeze event.

Yup..i stayed home for that..took an NRA permit class..
Prayed it would either snow or warm the hell up

Here at K now skied yesterday and heading out for today.

My day yesterday sounds like a repeat of yours on Sunday except I skied Growler instead of Centerpiece. Conditions sound the same. 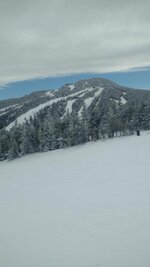 I'll be damned. Look at that everyone I posted a picture. Might start doing it more often now that I got it to work

This looks like a breakthrough. Now you're ready for JH! A pro tip on the cellphone ski photography - you can often get more scenery in the picture if you hold the phone horizontally.
G

Should of driven right past and went to Pico. It was amazing both days.

Nah no Pico for me this time...that picture is from the Snowdon Triple. I've actually only been to Pico once 10+ years ago. Definitely have to get back there.
You must log in or register to reply here.