Trip Report:
While returning from skiing in Maine, I stopped in Rutland about 10:30 PM. I'd been driving in the rain, and wasn't feeling finishing my trip. I checked Killington's website, and saw that they would be open Monday. I really didn't want to drop anymore money on hotels, so I decided to sleep in my car, and hit Killington in the morning. I found a twenty four hour Dunkin Donuts, and hung there playing with my phone till three in the morning. I then headed to Killington, and attempted to catch some z's.


I parked behind a box van that was parked in front of the K1 Lodge. It was cool watching the groomers do their work from my car. You could barely see their lights as they neared the top of the trail, as they became engulfed in the clouds. I tossed and turned for a while, I started the car twice to take the chill off. I lamented the fact that I almost grabbed one of my down bags for the trip, but didn't. It was starting to get light as I finally was able to sleep. I awoke around 8:30, and drove down the access road in search of breakfast. I returned and had to wait till 9:30 for customer service to open. While at DD, I decided to check Liftopia and found I could buy a pass for $36. I worried about having to print out a voucher, when I read they could actually scan the bar code displayed while viewing the email on the phone itself, modern technology, gotta love it. Saved me $13, paid for lunch.

Since Killington did not make snow earlier in the week, I anticipated firm conditions in the early morning. It did snow off and on in the valley, but no snow had accumulated on my car while I was there. The conditions were great, the summit recieved two or three inches overnight. Groomed in with the corn, it made for a fun surface, edgable, but with some give to it. It didn't take long for ice to become exposed. I thought by afternoon the majority of the trail would be scrapped down to the ice beneath, this was not the case. The edges of the trail remained relatively soft all day. The center did have considerable slick spots, but were only an issue if you tried to edge on them.

Skylark was Okay. Where it merges into Bittersweet was quite thin. The snow there was brown first thing in the morning. Lower Skylark, which was ungroomed bumps, was open. I didn't ski it. It was probably pretty good first thing with the couple inches on top. I saw tracks leading into the trail in the morning. I skied for about an hour when I encountered the infamous Bird Man. I said, "Hey aren't you the Bird Man?", I ended up skiing with him most of the day. Interesting character to say the least. He's pretty friggin big too, 6' 7", he said, and probably about 300lbs. He's a pretty good skier, he doesn't look like he's moving very fast, but he gets down the hill pretty quick. As the day wore on, we noticed someone shooting footage. I mentioned that it might be Meathead Films, sure enough, Radio Ron and the boys. Radio Ron says hi Nick.

So, between skiing with the Bird Man, and hanging a bit with the Meathead boys, it was a pretty fun day. I almost made it till close, I quit at 4:30 after getting sloppy and catching an edge. I didn't crash, but I figured discretion was the better part of valor at that point. I must have made forty runs on Superstar, it was great. The only bad thing today was the wind. It started blowing later in the morning, and was howling right up the trail the rest of the day. By the end of the day, the top twenty yards or so of the head wall was bare ice, reminded me of Whiteface, on a smaller scale. 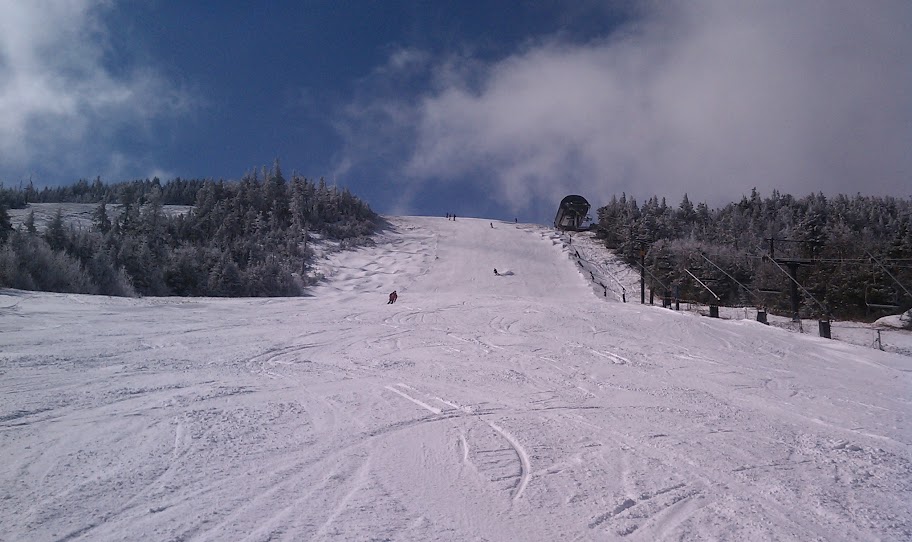 Early in the morning, the bumps skier's right on top skied nicely. 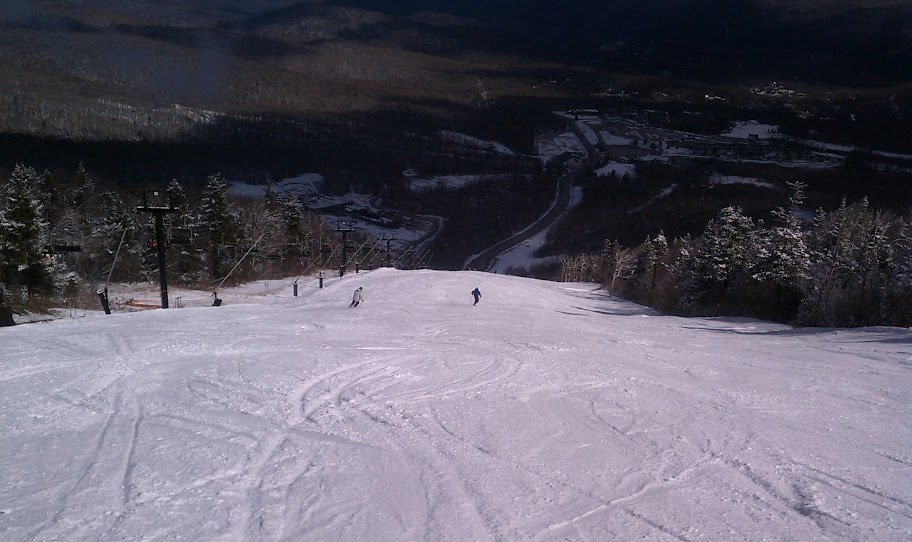 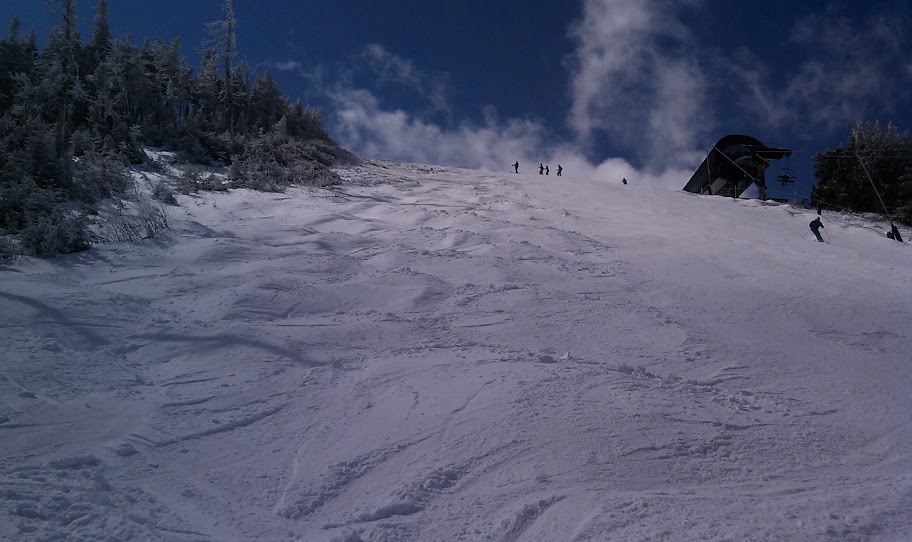 Good view of the bumps. 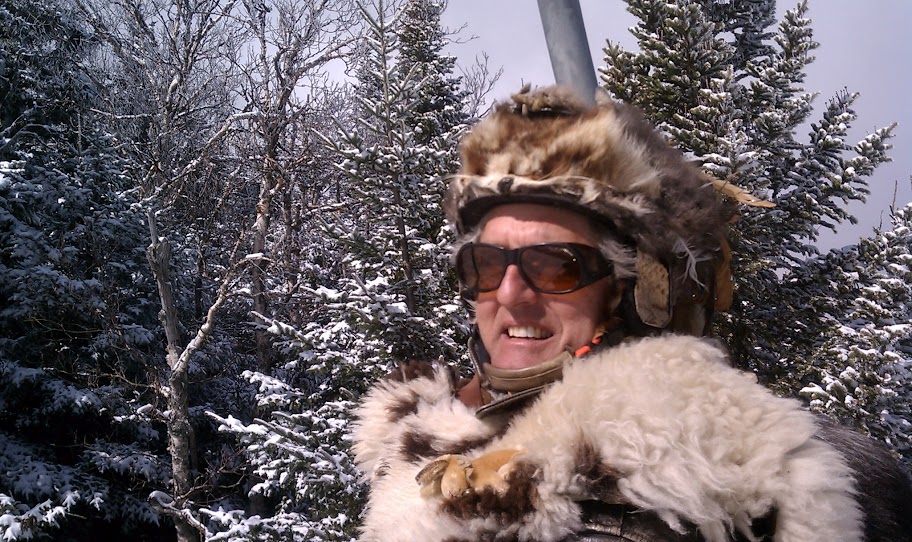 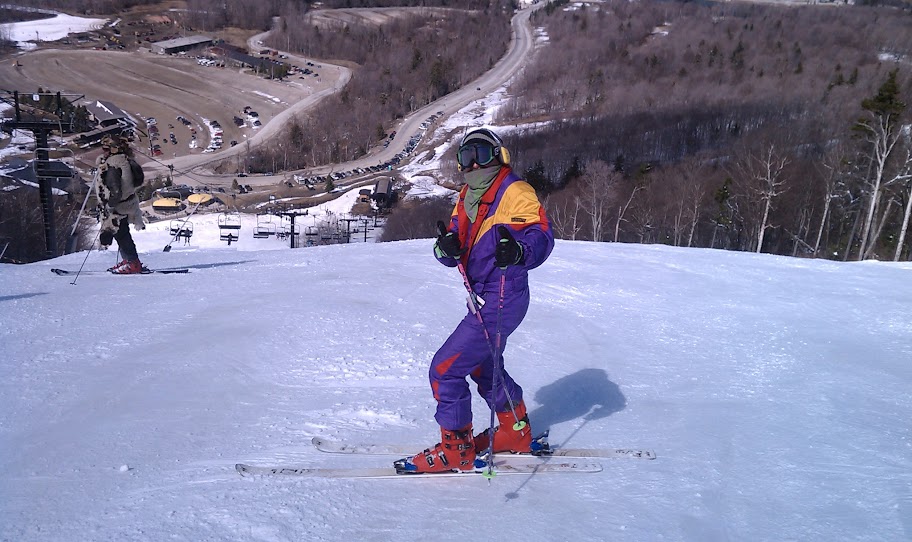 Radio Ron, the radio really works, I asked him if it were so, or just a prop. Bird Man in the background. 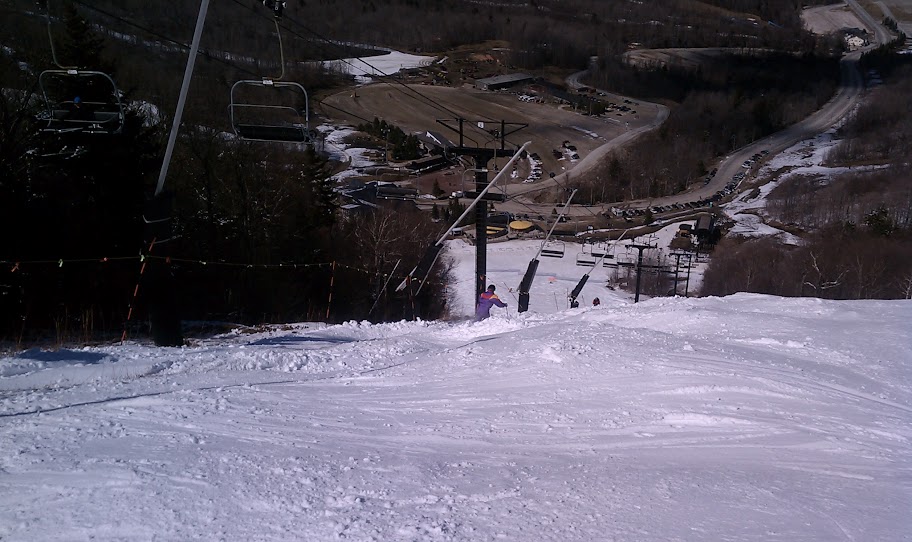 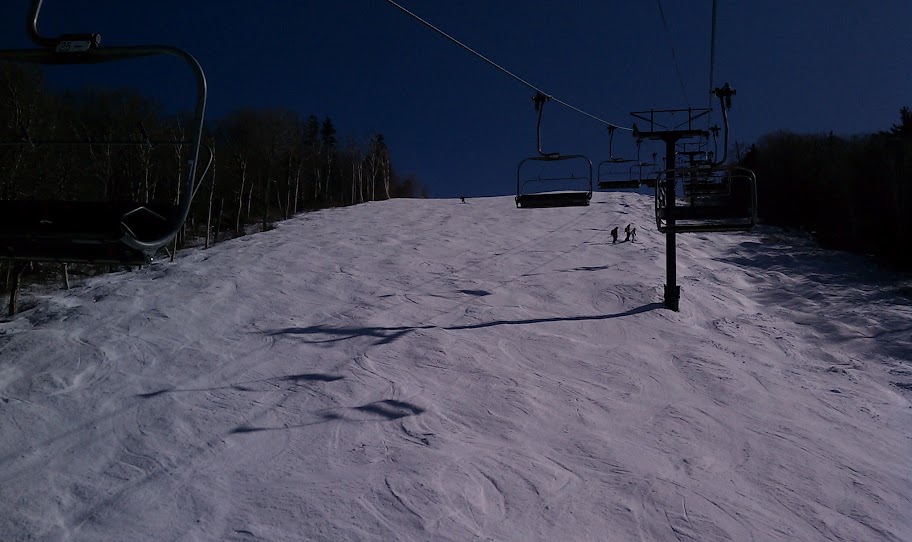 Still a ton of snow, in spite of the recent weather.

I'm spent, time for some real sleep. Back to reality tomorrow. I thought I wasn't even going to ski on this vacation. I had five incredible days in New England.
Last edited: Apr 2, 2012

Great trip report! It will be interesting to see how long the Superstar base holds up and how long Killington will remain open with lift service skiing.

Thanks for the report! Sleeping in your car to ski the mighty K is core!

Best effort I have heard of this year. Way to go.

Tooth said:
Best effort I have heard of this year. Way to go.
Click to expand...

+1 corn head is for realz

STREETSKIER said:
I think the joke is played schtick is old move along back to ohio
Click to expand...

Anyone that drives from Ohio to Vermont just to ski and snorts mint oil to stay awake for the drive is deadly serious. Radio Ron is the real deal.

Abubob said:
Anyone that drives from Ohio to Vermont just to ski and snorts mint oil to stay awake for the drive is deadly serious. Radio Ron is the real deal.
Click to expand...

Mint oil hmm, never tried that. I was shocked I was able to drive 200 miles from Killington to Binghamton, NY, and not get drowsy once. I was anticipating at least one nap on my journey home. This is on top of skiing five days straight, and sleeping in my car for all of an hour and a half, and forty laps on Superstar.

I used to work second shift and watch my Son during the day, I got three to four hours sleep a night. I guess it was training.

Way to get at it! Hard core! I take it that the Turn of the River was closed? They are a cheap place to stay and it is decent I hear. And great to see you got to ski with Bird Man and Radio Ron. I have seen and met Radio Ron a couple times. Nice guy. He invited me to join his band that he was forming. I take it that he was doing his trademark "dip, dip, dip" as he skied!

Abubob said:
Anyone that drives from Ohio to Vermont just to ski and snorts mint oil to stay awake for the drive is deadly serious. Radio Ron is the real deal.
Click to expand...

Yeah, and he sings Counting Crows, drinks honey, and drives every weekend from Ohio to Holiday Valley to ski the Chute.

Great report, if you ever need a place to stay in your car for future Killington trips, the Walmart parking lot is great for that and 24 hour stop and shop with a big bathroom in Rutland fyi.

Thanks for the advice Scotty, it was the first time I'd ever done that. Oops, I take that back, I did sleep in my SHO once at Greek. The roads were bad, and I would have been coming back the next day anyway. I just didn't see the point of spending the money for a room for a couple hours sleep. If I'd bought the Outback instead of the Impreza, sleeping accommodations wouldn't be so bad. I just reclined the driver's seat. I think, if nothing else were back there, I could sleep kitty corner in the back of the Impreza, it's a hatchback.I don't plan on making a habit of it. Loved saving the $ though. I camped when I went to Tux on Memorial Day Weekend last year, that was fun.

No problem i sleeped in my little nissan when I had my pass to Killington several years ago.

Yeah I would not advise folks to spend the night in the Wal Mart parking lot in Rutland. It is a bit sketchy down there.....

Sink works great as a shower

thetrailboss said:
Yeah I would not advise folks to spend the night in the Wal Mart parking lot in Rutland. It is a bit sketchy down there.....

Stop and shop was open 24 hours when i had my pass, and it didn't seem sketchy to me but I did live in the north Bronx Nyc at the time, so nothing really seems bad compared to the Bronx, I never ran into criminals but my doors were locked.

One urinal flush rinses the shampoo out of your hair. Even for me and I use a LOT of hair product on my wavy locks.

Cheese said:
One urinal flush rinses the shampoo out of your hair. Even for me and I use a LOT of hair product on my wavy locks.
Click to expand...

:lol:
You must log in or register to reply here.