Fast and firm, but you already knew that. I wasn't too motivated to go out but I made it fun by demoing some skis, which I love to do.

I parked at the Governors lodge and started with some warm up runs off the Kanc lift. Temps started at single digits and went up to mid teens. The clouds were whipping by but I only felt mild breezes at the tops of North and South peaks. I did not take the gondola. I'll avoid that every chance I can get. 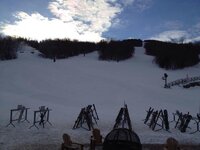 My demo skis, the Salomon 24 Hours Pro. Carvers with a 73 waist. 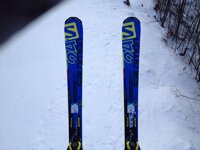 From the top of Flume. Lower Flume and Lower Walking Boss were just ok but their upper portions were serious hard pack. 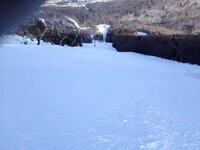 The crossover lift headed to South Peak. Note the group snow shoeing. Haven't seen that before. There were two Loon guides with them and they headed into the trees on the left. 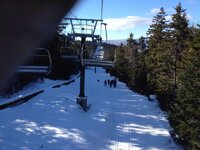 South Peak was in the roughest shape compared to the rest of the mountain. Boom Run was teeming with death cookies, which normally don't bother me but there were hundreds. The demo skis didn't like it. Top of Boom Run. 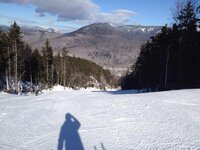 I also did Cruiser, Upper Twitcher, Jobber, and Ripsaw. On The upper (pretty steep and very scratchy) part of Ripsaw I ran into a lone ski in the middle of the trail. 50 yards down and near the trees was a dude about 20 years old. He was thankfully unhurt and happy he didn't have to hike up for the ski. 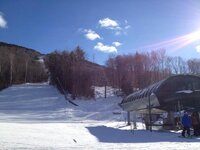 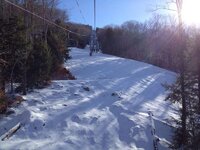 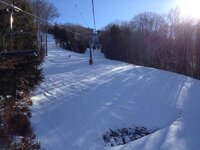 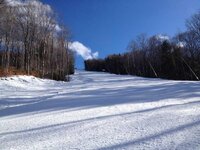 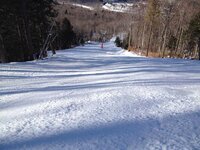 Had to stop at Camp 3 and the South Peak lodge to feel my toes again. I liked the demo skis for sure. They're at the top of the list when I finally decide to buy a carver.

They were blowing snow on Rampasture and Blue Ox. I didn't notice guns going anywhere else. What little skiing I did center mountain was better for sure than the outer peaks.

All in all an entertaining day but I'm anxious for better conditions.

Looks and sounds exactly like how the conditions were at Attitash today.

I liked them quite a bit. Tried them at Bretton last month but I wanted to try them again on a steeper hill. This is a new ski that is getting almost no press. Grips hard for the effort you put in.

Rodgers want $699, though. I'll wait until summer if I pull the trigger.

I run into people snowshoeing up Chin Clip coming off of the long trail at Stowe now and then.

Nice pics!
You must log in or register to reply here.