Finally made it to Magic! I did it on the right day too, about 12-14 inches of dry powder covering the mountain. I was on borrowed skis w/ 70mm waist since my own broke last week at Sugarbush. This combined with my choice to begin the day on low angle trails made me want to give up after the first run. I've not got much experience in powder so I thought I should start on the easier trails...this was a mistake...low angle trails and powder don't mix.

I persevered, though and found what I needed was some pitch... I had a ball on Upper/Lower Wizard, Upper Magician, Master Magician, Slide of Hans, and Talisman. Also found a couple trails on the other side that I liked. Coverage was good, though the steep trails I liked most were going to get scraped down fast. I stayed out of the woods since a) I was skiing alone and b) my skills at turning my skis in deep powder is pretty limited. My legs were spent after 4 hours, but I certainly got money's worth. I used a BOGO that I got from SUVSteve (Thanks!) so my cost was a whopping $20.

Both lifts were running, and everyone there was having a blast! 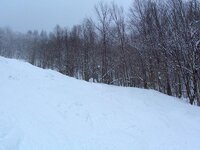 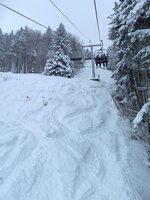 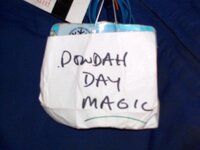 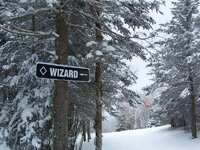 Nice! Did they get a big turnout? Heading there Friday.

i was thinking it would be cement.
now im even more bummed.
damn work!

Awesome report---Magic has had a really good yr after their slow start and lift issues in early January. This wknd for their Spring Fling should be some of the best conditions of the season.

Abominable said:
Nice! Did they get a big turnout? Heading there Friday.
Click to expand...

Yes, turnout was good ( for ?Magic, I think...) At 9 AM there was a long line for purchasing tix, and when I left around 2PM Lot B was pretty full. When they were running only Red, there was a line 8 or 10 deep, they started up Black and from that point on it was pretty much ski-on.

The fact that both lifts were running on a midweek powder day says it all as far as turnout goes. I'm stoked that Lot B was pretty full. That's almost like a Saturday! Can't wait for Saturday. The ribs are feeling good enough that I will have to make some turns this weekend! Glad you enjoyed your first visit Euler.

jrmagic said:
The ribs are feeling good enough that I will have to make some turns this weekend!
Click to expand...

Hell yeah, Magic was wicked good today! Got in line for Red at 8:30 and was about the 10th chair...by the time they started loading at 9 the line was around the building :lol: Made my first run down Black Magic and it was the run of the year so far, floated the cliff bands, hardly touched bottom, so nice! Fresh turns for the first couple hours then hammered pow bumps until last chair :smash: I am now crippled but totally worth it.

Thanks for the TR, I've been egarly awaiting some from this storm. Nothing like your first time someplace on a powder day. Kudos, Magic remains on my hit list.
O

Planning on heading up Saturday, looks like we'll still have some great skiing.
P

I'll be there Saturday.. Pumped. I love this place.

Thanks Steve. I will have to take it a little easy but I'm so stoked to be getting back on my skis. Its been a long 4 weeks. Even longer with the good snow that's been around for most of the time.

Great TR! Glad you go out on a powder day.

When Magic is good it is very, very good! Great day. Glad you got the hang of it and had a blast. Geez, nobody is talking about falling. that's the hallmark of my day!

billski said:
When Magic is good it is very, very good! Great day. Glad you got the hang of it and had a blast. Geez, nobody is talking about falling. that's the hallmark of my day!
Click to expand...

Oh, I fell a lot! Especially on those first couple runs on the green and blue trails. I still can't get over how much easier it became when
I moved over to the steep terrain.

Here's some footage of a friend of mine from Wednesday. Looks awesome!!http://www.youtube.com/watch?v=6ULFGwvmshs
T

jrmagic said:
Here's some footage of a friend of mine from Wednesday. Looks awesome!!http://www.youtube.com/watch?v=6ULFGwvmshs
Click to expand...

post and vid of the day if not year.

can't wait to hit the trees there tomorrow!
You must log in or register to reply here.