Absolutely amazing day to be at Magic. The red chair just reopened today, meaning, all the snow they had from the last 2 storms was just sitting there and only skied by turn-earners in the meantime. I arrived just before 9:00, the parking lot was still pretty empty so I had a quick breakfast sandwich and got on the red chair.

Started the day off right they were bumping some live Phish during the morning at the bottom of the lift. I knew right away just by looking anywhere around me this was going to be the best day of skiing so far this season. As soon as I touched my skis down off the lift and headed over to the west side I realized conditions were incredible. Heavenly. Like, 4-5" of soft powder on top of a base of either more powder or packed powder, depending on the trail.

First run was down Broomstick, a sort of steep little narrow one, soft bumps. This dumped me out into another soft bump field.

Over the course of the day I skied hard with just a couple 5-10 minute breaks. Primarily I skied powder/moguls. During my time there I became more confident sort of zipping through powdery bumps. I adjusted my technique and after a few runs it was like I was sort of softly bouncing off them and gliding over the tops of them. Really a fantastic feeling. The really steeper stuff like the double diamonds there I was not skiing this fast, but I hucked a couple small/medium cliffs under the red chair and jumped a few water bars. Stuff I would probably do normally anyway but this came without hesitation today.

Secondarily I skied the woods. The Wardrobe was excellent. Really really excellent. You had your choice of fresh lines or you could ski where other people have bumped it up a bit. Either way is fun to me, I like to mix it up. Wardrobe is a really awesome woods zone.. this being the first time I've skied it I was really impressed with the unique and interesting feel to it. Overall not *that* difficult but the entrance was a little hairy. I skied a couple other woods but the other one that stands out is whatever are the woods to the East of the red chair, up near the top. This, on the other hand is probably one of the more difficult woods I know. Very tight trees, and a pitch that makes you feel like you just skied your full height or more with every quick turn. These woods are sick. Goes from birch trees, to a pine grove, switches ecosystems a couple times, and has cliffs. I was paused trying to evaluate my next move in the steepest area with also very tight trees... when I heard a kid shout from the lift (which is just barely within sight and earshot).. "Go over the cliff!!"... I shouted back "YOU go over the cliff!".. He said "I have before!". The kid was probably no older than 12 so obviously I was left with no choice but to huck a good 10-15 foot drop from a steep approach into a still steep tree field.

I really had no choice. I can't let a 6th grader think I'm a wuss. So I hucked it as carefully as possible, stuck my landing in some soft snow, and made a bunch more turns in the woods before coming to a stop. The kid at this point was almost out of sight and earshot, but I heard a "Yeah!! Shred the gnar!"

Finally, some elementary validation. I knew at that moment that what I had just pulled off made me look like a better skier than I actually am. But hey, maybe I won't have a regressing season after all :razz:

Those woods were eating up my quads at an exponential rate, however. And it was only 1:30 or so. I wasn't going to call it quits so early, so I spent the next hour and a half cruising the green and blue groomers. Which skied exceptionally well. The greens were mostly groomed but still steep enough to get some speed going and a nice carve. The blues were mostly ungroomed with all kinds of powder stashes and smaller moguls. Pretty sure I was killin' it all over the mountain there today.

My legs wouldn't handle any more by 3:00pm, I felt it was becoming cruel and unusual punishment to myself and it was taking a lot of effort to not start to ski sloppy. So that was that. 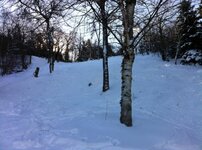 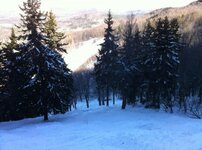 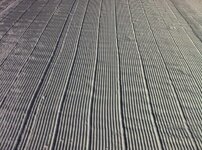 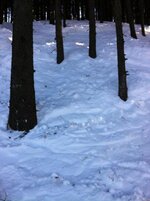 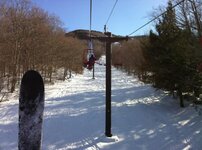 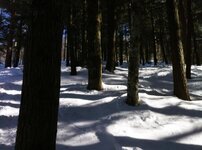 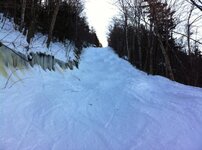 Everyone should go to Magic tomorrow or even the next few days it's going to be prime.

I hope i get back to new england in time for a day or two there. Looks great!!!

Nice pics and thanks for the report. Couldn't get out today but I'll be there tomorrow!

That glade run skiers right of the Red Line is pretty damn steep. I may be using my voucher tomorrow.

Great TR, bd. I can tell that you had an awesome day. TR's like this are so fun to read. Thanks for this and your other great posts!

thetrailboss said:
Great TR, bd. I can tell that you had an awesome day. TR's like this are so fun to read. Thanks for this and your other great posts!
Click to expand...

awesome TR ...made me

but that should change tomorrow. It is wicked steep and tightly spaced :smile: Great TR! How were crowds up there today?

Glad to hear it was a great day at Magic!

Thanks everyone. Most I waited in line for the red was 1 minute. Mostly ski on. More people should have been there, but I guess I didn't mind.

Bene you should definitely go tomorrow! And anyone else on the fence.

Gee tuna, you should have told me you were going to be there. Looking for a dude with reflector gogs is a hard one!
So you did that steep glad. You 'da man. Not in my wildest dreams. We did some of the other unmarked glades on the west side. My skis of choice are just too damned long.

Little Red is BIG RED today! Nice untouched snow, a bit heavy, not fluffy, but lots room to carve new tracks right up to the closing bell. Woods are skiing great. Watch out for some of the water bars mid-mountain on unnamed connector paths. These are non-trivial!

Brought a bunch of first timers out today. They LOVED it. One woman couldn't stop commenting on how friendly everyone is. It really was a nice day. Lots of thanks congrats went out to mtn ops, along with donuts. These guys need some sleep. Even Jim was running lift duty in the AM. The blacks and the steeper blues were skiing nicely as natural trails. The base is suprisingly good in and out of bounds.

It was also exciting to see many lower-level (oh, I guess "progressing" is the PC term) on the slopes. Moving the skier.boarder base away from the diehards is essential to their long term survival. On the learning handle tow, they even had a line!
Which reminds be, the lines averaged two to four people, except for one odd time where there was about 20 people queued up. Reminded me of the MRG single chair line!

Day was bluebird perfect. The winds completely died down by about 11am, making it enjoyable anywhere you were on the mountain.
Oh, yeah, and the colored icicles are back.

You owe it to yourself if you've never been.

Food is great. It's too bad Snow Wizards decided to close their business.

We should have quit by 3:30, but it was just two good to stop. Ah, but the body wasn't cooperating and the falls came fast and furiously. One last groomer (the groomers are skiing great everybody. They are not scratched off.

Thanks for the report and pictures. I really want to go but my knees aren't ready for Magic, yet.
S

Location
the woods of greater-Waltham

Nice writeup & pics! On 12/27 I took almost the same shot as your second picture: 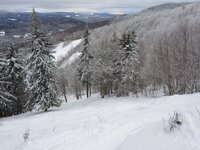 We could use like, an app, where Alpine Zone users can check in at ski areas and see if other AZ people are there as well. And then you can choose if you'd like to meet people for turns.

Skifastr your pic makes that same shot look steeper than mine. I gotta stop relying on the iPhone camera and start using the Canon superzoom again.

I was actually thinking about that exact concept earlier ....

Nick said:
I was actually thinking about that exact concept earlier ....
Click to expand...

Nick, you now have a new summer job!

Everyone should go to Magic tomorrow or even the next few days it's going to be prime.
Click to expand...

So tuna, I see you purposely set yourself up to not show those waterbars to your back. I did a little water skiing in there!

Don't know if you skied the lower part of Mystery yesterday.. but that's where the real waterbar action was going down. There was three of them, consecutive across the entire width of the trail. Probably 4 feet deep and 5 feet wide. Each one had a little jump or lip I guess you could say. It ended up being fun because I gapped them all at a pretty good clip (one at a time of course). But decided not to push my luck and try it a 2nd time.

billski said:
Nick, you now have a new summer job!
Click to expand...

Perhaps. I have a few more "integration" ideas between the forums and the so-called "content" side of the website. AZ needs to be more cross platform in the long run. Mobile integration, on-the-snow sharing, etc.
You must log in or register to reply here.