I had to travel out west for work the last two weekends and seeing that its pretty rare to ski in July I thought it would be a good idea to knock summer skiing off the bucket list and take the family with me so we could squeeze in 3 ski days at Mammoth and 2 days at Squaw Valley between weekends. We flew into LA for my meeting on Friday then scheduled a flight the following day directly to Mammoth. What I didn't know is that flights only land in Mammoth about half the time due to the high winds. If you ever make your way to Mammoth I highly recommend flying into Reno then driving the 3 hours down to Mammoth. After a 4 hour wait at the airport our flight canceled and we ended up renting a car for the 4.5 hour drive. On a positive note, the drive up to Mammoth from LA was some of the most beautiful scenery that I have ever seen which made the long day a lot less painful. Our first day out on the slopes was Sunday which was the last day of June. They had top to bottom skiing and over 40 runs open with 10 to 15 more that you could hike to. I was blown away by the amount of cover they still had and the conditions of the snow for this late in the season. By 9 am the snow really started to soften up and you had good skiing until 1pm. After a few warm up laps with the family on some cruisers they let me break away for a bit so I headed straight over to chair 23 which takes you to the top of the mountain. The top of Mammoth has some of the most amazing steep and bumped up terrain that I've ever skied. I started out on the Dropout chutes then moved over to the Wipeout chutes which I think is the hardest run on the mountain due to the very few lines you have to choose from dropping in. From there I hiked over to the Paranoid flat area and skied Monument and the first Paranoid flat which was the only one of the 4 flats still skiable. Other then the fact that both have 40 degree plus pitches I didn't find them nearly as challenging as the Wipeout/Dropout chutes which have the same steepness but with massive bumps and rocks all over the place. After I was done with the Flats I tested out the Cornice bowl to make sure my family could ski down it if they took a chair to the top with me. Mammoth grooms that run and it is by far the most popular route down from the top so it gets crowded. The Cornice bowl tops out at 38 degrees for the first few turns then levels out substantially. In any event my son was proud to make it down that run the following day! After the test run down Cornice I meet up with the family again near McCoy station and we skied a number of the runs off the facelift chair. Then at the very end of the day I snuck off again and skied the Gravity Chutes under the broadway chair near the main lodge and finished with the Climax chute off the top of the mountain right under the gondola which was a lot of fun. It's very similar to the Wipeout/Dropout chutes with a sea of bumps, rocks, and steepness but much wider making it a little easier to navigate. The Gravity chutes were steep and bumped up but would have been more challenging if the run was longer.

Monday July 1st was another perfect blue sky day of skiing. As a matter of fact the weather was 60 degrees without a cloud in the sky all 3 days. Like Sunday we all warmed up on lower mountain groomers then my son and I went off and did some skiing together. Aside from doing the Cornice bowl with him our favorite run of the day was the West bowl off the facelift chair which is Mammoth's only real dedicated mogul run. The pitch is about perfect and the bumps were nice and soft. From there we skied Dry Creek, the Christmas bowl, Center bowl, and the China bowl all off the facelift chair before meeting back up with my wife again. That part of the mountain is really fun for intermediate skiers. The runs are mostly black diamonds but they are not all that steep and skiable if your a strong intermediate skier.

Our final day at Mammoth was Tuesday July 2nd and we all pretty much skied the runs off the facelift chair and some off the broadway chair near the main lodge. At the very end I was able to sneak another run off of the Climax and Wipeout chutes then ended traversing over to the Hangman chutes and sking down those from about half way. I would have loved to ski Hangman's from the top as its pitch is over 50 degrees but the run from the top was unskiable, I'll have to try that one next time!

I hope you enjoyed the report, in 3 days we only skied less than a third of the terrain but its enough to say that Mammoth is an outstanding mountain for families especially if your group is at different levels. There is plenty of interesting terrain for everyone and that doesn't even include the world class park skiing that the resort is most known for. Squaw Valley is an expert/advanced skiers dream but there is not a lot of variety for intermediate skiers from what I could tell and even the intermediate terrain can be fairly steep. I thought some of Squaw's blues in the Lake Shirley area were just as steep as most of Mammoth's blacks, which I didn't mind but my wife did! In any event, we'll definitely try to go back someday and needless to say I'd highly recommend a trip to Mammoth. I'll add some pictures separately........ 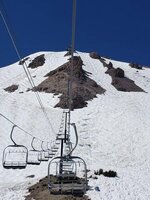 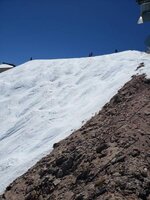 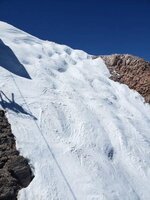 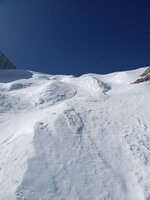 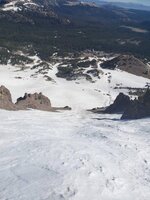 The 1 photo is how coverage looked at the paranoid flats, you had to do a short downhill hike which wasn't bad to get over to that section. The next photo was of monument then the last two are from the top of paranoid flats then looking up about half way down. I traversed all the way over to that far rock in the 3rd photo. Other than missing some uncovered terrain on the way down I did think either run was all that challenging for double black diamond runs. 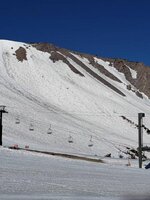 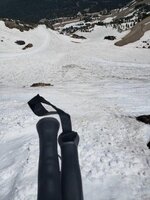 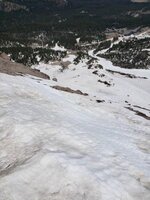 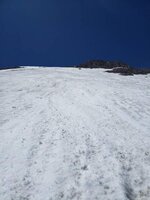 The 1st is of the climax chute the 2nd is from the top of that chute. The 3rd photo is looking up at Hangman's which wasn't skiable unless your willing to fly over those exposed rocks! The last picture is my favorite which is of my son skiing down the cornice bowl. I hope you enjoyed the photos. 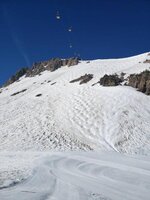 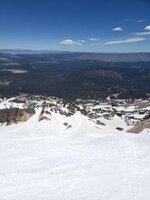 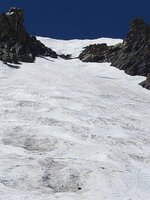 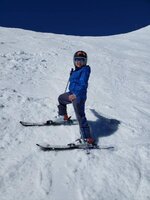 That's awesome! I was thinking about snow this weekend when it was 90 in Vermont. Could have used some cooler air. Glad you and your son were able to get out there.
T

Yes I was thankful to be able to fit sking in on the trip. Aside from suprisingly being a lot of fun it was my wife and son's first time skiing out west. With that being said we love skiing Northern Vermont as well and look forward to coming back up to your neck of the woods as well next season. It's tough for anywhere else to top all that tight tree skiing you have up there when the snow is right!

Thanks Steve! Mammoth is such a great mountain and I'm sure its even more amazing fully opened during the heart of the season. I can't wait to go back one day.

Tony
You must log in or register to reply here.