This was my first trip to Tremblant, although I'd heard about their rep as having excellent accommodations. Me and a couple buddies picked it because they had enough base for some glade skiing. The abundance of Molson and poutine didn't hurt either.

We drove up to Montreal on Friday night and caught the tail end of the car show. Early Saturday we drove the rest of the way up to the mountain. What was supposed to be an hour and a half drive was three with traffic due to a raging snowstorm. Lesson learned: drive there the night before if the weather is good. The falling snow softened the sting of the long drive.

Btw... They build ski areas like Dunkin Donuts up there. It seemed like there was one every mile or so on the trip up.

We burst out of the car and were on a lift within five minutes of parking next to the Port du Soleil lift. Temps were in the 20's and there was plenty of base for skiing in the trees. Plus the snow that had been falling all morning had added up to about 4 inches of fresh to push around. We eventually wound up in an un-manicured and mostly untouched glade off of Ryan Bas. It reminded me a lot of Burke's East Bowl. We skied until they closed the lift. The low-light of the day was a frightening ride down the Soleil side trails. Picture flat light, wind blown trails and exposed ice over every rollover... ie Cannon.

We stayed in the village that night with a pretty good last minute deal picked up by my buddy. It was around $100 for a suite for the three of us. We were right across the hall from the hot tub where we shared beers and stories from some boarders who told us about "The Edge".

Sunday was brutally cold: -16F at the summit on our first run... warming up to -9F by the time of our last run around noon. That said, the sun was out and more snow had fallen overnight. We checked out the north side, including the Edge which had fantastic glades. The steep, open, evergreen glade at the top was a highlight. The cold weather kept the crowds at bay- despite the abundance of fresh snow.

After a few north side runs we worked our way back around to the glades from the previous day.

It's a long drive up there, but well worth it right now. Definitely a place to check out if you've never been there.

My lasting impressions: Lots of terrain, lots of apres-ski nightlife with hella expensive food, an abundance of really good skiers, and a long, long drive from MA.

If you're thinking of making the trip... do it. It was worth it.

awesome... I've never skied Quebec but I think Sutton is 1st on my list. Got any pics? 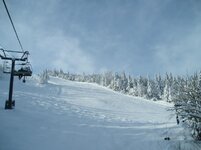 Top of the Duncan Lift at the top of the Versant NORD ,Tremblant . been skiing Tremblant for yrs with my ski buddies 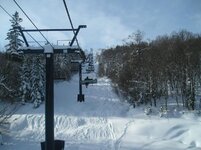 halfway up the Duncan on Versant Nord 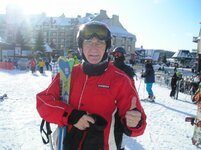 so glad to hear that the glades are open and they are getting some fresh pow! I'm heading there in 2 weeks. Definitely didn't get the same deal on a suite as you though. wow, well done.

Thanks for the report. Can't wait!

Have a great time up there Downhill. BTW.. "Suite" was probably the wrong term for what we had. More like a kitchenette. (one room, hide-a-bed, kitchen, gas fireplace and fold out couch) It was comfortable and clean, and even had a balcony for keeping your beers extra cold. 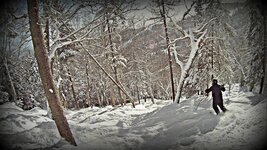 This shot is from the Emotion glade off The Edge. My one regret was that we didn't get a run down Sensation glade off that same side.

wow... great pics! I cannot wait to get in those trees. And for some slopeside poutine!

Did you guys take beer/food over the border with you? Or buy everything up there? I know that town is super expensive so wanted to bring in at least some drinks from outside. But wasn't sure how strict they were at the borders with that stuff. Would rather not spend an hour at customs trying to 'declare' some groceries. Anyone know of good places to stop outside of the village to stock up? (I'll be coming from Rochester, NY, so driving up through Watertown and into Canada, then through Ottawa to get there)

We always bring our liquor and munchies , but stay in a very cool Auberge on the Nord side .rhe chef always cooks us 2 gourmet meals a day , yeah its expensive but life aint a dress rehersal here we are at the Auberge i.m the smiling dude in black

Skied at Tremblant in March 2013. Simply one of if not the best skiing on the east coast when you take the whole package into account. Constantly thinking about getting back there.
You must log in or register to reply here.