Conditions: Packed Powder, Powder in the trees/sides of trails, VERY WINDY AND COLD

Trip Report: I skied from 9:30am to 4pm on Saturday, however I had to take a couple of breaks. The wind was horrendous in the morning with gusts well over 30mph. As I was heading up to the mountain, I was disappointed to see that the summit lifts were closed, but I was hopeful that they would open them before I got there. However, I had no luck. They kept the summit lifts on wind hold ALL DAY. The Sunbrook and North Face areas were also closed. This meant the only lifts that were open were: Canyon Express, Ego Alley, Tumbleweed, Nitro Express, and Heavy Metal. Nothing could get me more than 2/3 of the way up the mountain. I headed out, and I soon realized why the lifts were closed. This was definitely one of the coldest and windiest days I've ever experienced skiing. The temperature never got above about 5 degrees (it was below freezing in the morning), and with the wind chill, the temperature was around -20 degrees (at the base). After taking my first two runs, I began to realize how brutal this day was going to be. As the day went on and I used up a few hand/toe warmers, the sun came out (it was a beautiful bluebird day) and the winds died down (slightly). Now let's get to the snow conditions. I wanted to be in the trees as much as possible since Mt. Snow had received over a foot of snow in the past week. It was also a lot less windy in the woods. Since the glades off of North Face and Sunbrook were unavailable, I had to settle for the lower mountain glades. I hit up the glades off of "One More Time" (aka "The Boonies") about 4 times and the glades off of "Ego Alley" about 3 times. They both had nice coverage and I found some nice powder that was (at times) boot or knee deep. However, there were some significant ice spots in the trees due to high traffic and the wind whipping the snow right out of there. I headed over to Carinthia to do some cruiser trails which were very nice. However, the Nitro express lift shut down (idk why), so everyone flooded to the Heavy Metal double to escape the Carithia area. So, with only one HSQ going in the afternoon, the lift line for Canyon was getting quite long (about 15 min). The cruisers off of Canyon were very nice, as no ice was to be seen with very nice snow. I went up on the Ego Alley lift a few times, but it kept stopping at least 3 times each time I was on it. I was obviously expecting a lot more out of this day. I wanted to go into other glades around the mountain, but I was forced to stay on the lower mountain due to high winds. Weather conditions: horrible. Snow conditions (for what I could ski): great

Some powder that they had on the side of a trail: 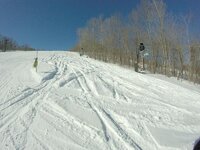 I've never seen the Bluebird this empty. Oh, wait. It was closed. Note the crowd of people in the background trying to get onto the Canyon lift. 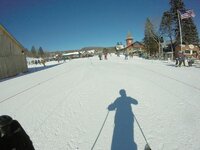 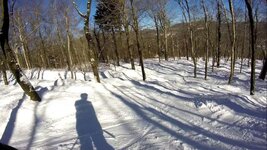 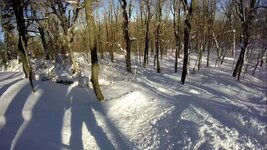 Here's two pictures from the glades off of "Ego Alley:" 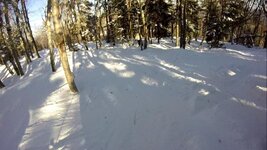 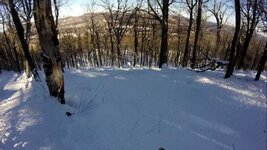 good park, very fun
You must log in or register to reply here.