I'll keep this one brief. My friend had a couple $11 Liftopia tickets and invited me to go, so of course!

The parking lot was pretty empty and the lodge was also empty. Ski on to the lifts all day.

There was 5" of snow last night but it was some of the soggiest snow I've ever skied. It felt like the brakes were being put on all day. Really rough on the thighs, they were burning after just the first run.

After lunch somebody gave us a stick of wax which slightly helped. Nice guy, if you happen to read this thanks again!

The North Face was pretty fun although hard to make turns due to the wetness of the snow. Some of the woods next to PDF were the run of the day for us, it was actually pretty good in there. Total coverage in the woods at Mt Snow still by the way. And the trails obviously had edge to edge coverage. There were a few bare patches on the mountain including one I didn't see until last minute and ended up pulling a really messy jump over. You can tell the base is pretty thin but the coverage is still excellent.

Around 1:00PM it started raining. I had shed my helmet and coat by this point as it had warmed up and I was sweating a lot due to the heavy snow, which was mostly untracked except for a few trails that saw more traffic.

So we went into the lodge and waited to see if the rain would stop, since it was really pouring and originally we were like, F this. But we decided to find some ponchos, which we did, and take some more runs.

The rain turned to ice halfway up the mountain and wet driving windy snow up top. It was really brutal riding the chairlift and with no hat or helmet I was getting a serious brain freeze.

But the snow was getting quicker due to the precipitation and we had some fun for a few more runs. Then decided our legs were burning like hell and also we were getting wet and freezing so called it a day around 2:30.

There was almost nobody there by the time we left. Also the Bluebird Express was closed due to some malfunction in the morning so we were riding a normal, exposed quad chair to the summit.

Hope to get another couple days in this season.

Sorry no pics but Mount Snow looks like Mount Snow.

I was invited up for this weekend. Do you think coverage will hold out?

Location
Westchester County, NY and a Mountain near you!

It doesn't matter, it's beerfest.

From what I hear there is plenty of snow. This time of year, it all depends in the weather the day you go. (NOAA is predicting sunny and 41 for Sat. 46 and sun for Sunday)

vinnyv11 said:
I was invited up for this weekend. Do you think coverage will hold out?
Click to expand...

Before the snow fell yesterday, I was pretty sure that given the forecast for the week that they'd probably loose a few natural snow trails (typically with Southern exposures) by next weekend - now that might not even happen!

My "unofficial" snow depth measurements that I did in tree areas in settled snow Saturday afternoon using my ski pole as my reference was showing a max depth of about 30" on the Northface, about 24" in the woods in Sunbrook and about 18" in the woods on the Main Face + Carinthia! Plus another reference point as to how much natural snow is still in SoVT by Mount Snow now, is the walkway to my place (elevation wise i'm about 400 feet above the base lodge) which gets snowblown, not shoveled after every snow event, has snowbanks that are mid chest to shoulder deep on me (I'm 6'3") now! Lots of snow still!

That being said, while the overwhelming majority of Mount Snow is still white, there were starting to be a few, ISOLATED thin/bare spots this past weekend in areas that were typically higher traffic and exposed to the wind and typically just confined to natural snow trails.

It's been at least 6yrs (since Peak 1st bought Mount Snow) since the snowpack has been this good, this late in the season at Mount Snow! And with the lateness in the year, the long range forecast starting to suggest that a pattern change to "real" spring temps will happen in about 2 weeks, and the snow this plentiful, don't think about it, just go skiing!!!! If not you'll just kick yourself later when your reading the TR's!!

Rode the lift with a guy who works in catering for them he said they were shooting for a last day of 4/14.

Take that for what it worth.

(On North Face - looking down Chute) 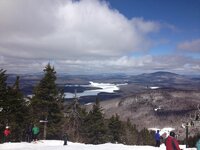 Rode the lift with a guy who works in catering for them he said they were shooting for a last day of 4/14.

Take that for what it worth.

Fixed the trail name for 'ya

I'm sure there will be some melt this week, but this weekend should deliver. Unless things warm up to 70 and rain, the mountail will probably be 90% open this weekend.

bdfreetuna said:
The rain turned to ice halfway up the mountain and wet driving windy snow up top. It was really brutal riding the chairlift and with no hat or helmet I was getting a serious brain freeze.
But the snow was getting quicker due to the precipitation and we had some fun for a few more runs.
Click to expand...

That's hard core.
You must log in or register to reply here.