Mount Snow skied fantastically! Long John skied great with nice soft snow. I still like the HKD's more than the fans. Very soft snow with very few irregularities- tough to do on a 2 mile trail that drops 1,600ft! Very consistent creamy snow. Cascade was kinda scraped off up top but nice on Canyon. I love the bottom part of Canyon where it opens up. Such great cruising terrain with a consistent pitch. The Gulch on Carinthia skied awesome as well. There's a few features over there but there's plenty of trail width to bypass them without being a hindrance. Highlight of the day was FreeFall. Crazy whale shapes! Some snow was fantastic!!! I skied the North Face most of the day. As the day went on the snow got pushed around and you could explore the trail more as new lines formed. It was like being on a roller coaster with crazy snowmaking mounds! Fantastic! The final pitch was death ice though. Solid 50ft glacier. Everyone had to hug the right side of the trail and in order to find edgable snow. The run-out got groomed a bit pre-maturely and was ice. I saw one racer get an edge in it while everyone else had to skid. I won't de-merit Mount Snow though as the runout is almost completely flat. Even with that Free Fall was absolutely my favorite run of the day. I got 5ish runs on Cascade/Canyon and 7ish on Long John. Conditions were so unexpectedly good I skied through lunch and stayed til 10 minutes before closing bell. Very good day. Got a little crowded mid-day on the trails but lifts were ski-on mostly. LOT'S of nationalities all learning to ski on Long John. Fished a snowboarder out of a ditch who said "Thank you" in broken English. Helped a guy put on his skis mid-trail. Asian dad who was trying to figure out his son's ski bindings in the line for the Bluebird was still there after I finished my run.

Looking at the snow report I believe Free Fall still hasn't been groomed. River Run needs a night or two more of snowmaking but it will open up soon. Cascade/Canyon and the Gulch are deep while Long John is a little thin- probably better to add base these next few days rather than expand before rain comes later in the week. Free Fall has branches and stuff poking through the snow. I used my rock skis but did not get any base/edge damage. 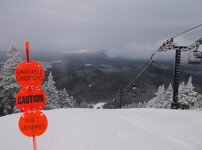 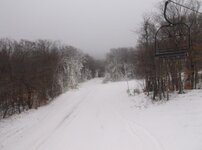 I was up there as well. Had a great day. Unfortunately I didn't try the north face till later in the afternoon when my legs where jello. By far the best snow on the mtn.

Freefall has been groomed according to the snow report this morning! It was nice...
You must log in or register to reply here.