Finally had a couple days off for a ski trip with my wife, 2 year old staying with the grandparents. Saw the weather about 8 days prior and booked the trip for the safest bet which seemed to be north of I-89.

2 nights at Smugglers Notch Inn... really a wonderful time but I'll get to the skiing

Day 1 (Tuesday) we arrived at Mad River Glen, typical mid-week situation with beautifully close parking and plenty of lodge to ourselves. One issue -- it was drizzling some freezing rain. But damn conditions were good. Basically riding the single chair you'd get a coating of ice and feel frozen then shake it off on the way down.

Didn't mention I'd just beaten one of the worst colds I've had in years, still taking Ibuprofen for the symptoms.

But my wife was game, I decided let's ride Sunnyside until the drizzle stops, at least we can huddle on the way up. So, my wife first skied 7 years ago and gets in much less skiing than I do. (she does have a good coach though) . First run I took her into some chutes off the top of the double into Partridge. Next run we did 4 sections of woods off the other side I basically just call "Quacky woods". Probably has a different name but it's woods all the way down. Great powder, it was easy to ski the untouched if you wanted to, or if you are my wife just follow the existing tracks. The snow was really great although you had to ski with a light touch in some places.

We took a few breaks inside to dry off but also took great runs like 19th/20th hole, deep powder in there, nice mogul runs like Canyon/Grand Canyon, various groomer runs and going into the trees at least half the time. Typical MRG day. We didn't ski Paradise which I suppose was the only omission, but by the time it was even an option we were pooped.

Next day Smugglers Notch, up there you could tell there was zero freezing rain and it was all snow. And today was also a sunny day instead of the foggy stuff yesterday.

I won't go into play by play but my wife was a real hero that day. Highlights included:

- Doc Dempsy's > Weed Bag > Mustache
- Upper FIS extension (my wife says never again )
- Smuggler's Alley and Sterling woods + Shakedown
- Back Bowl last run of the day.. first time for us both.. reminded me of some of the woods at Cannon at first (steep/tight but not extreme), there was one section I got a little hung up in though due to it being a real steep rocky chute with some wooden sticks going vertical. With my long skis I was really pondering my next move for a minute, it required a big jump turn commit with ideal follow-through. So I did it, and I was glad to see my wife handling it pretty good doing some smart back n' forths followed by a quick turn and a skid or two. Lots of fresh snow in there though, the bottom half opens up completely.

Conditions were absolutely prime, the only trail that sucked for some reason was Upper FIS below the top part. Somehow that was frozen but every other trail was perfect.

Only pics we have are from MRG day 1 ... both our phones like to die in the cold and we really didn't bother anyway 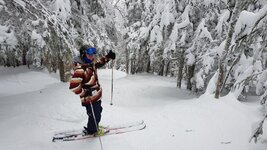 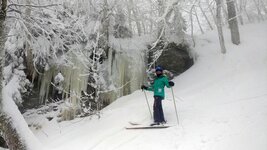 Looks like a great trip! I can't wait to try Smuggs later this year.

Props to the wife for skiing all that..mine ..woukd kill me if i dragged her in there...lol

Only thing she won't do again from that trip is the top of FIS, she said she got vertigo on it and the nerves kicked in, pretty exposed and steep I can't really blame her. She doesn't have much practice with jump turns and skiing the fall line. But she pretty much knew what she was getting into (you could see it from the lift) and I barely had to talk her into it. I think in retrospect she's proud to have done it.
You must log in or register to reply here.