Came out for so.e spring skiing and wound up getting a midwinter powder day too!
Day 1: April 19
Well, the winds were up so all planned lower lifts were up from opening bell but the Summit Express was on windhold. Started the day by heading over to the Northwest Express. If the Summit isn't open, this (and the Outback Express if it's running though Northwest is lower so all Outback terrain is in play regardless) is where the advanced skier/rider will want to hang out. Tons of terrain and almost 2400 vert available off the Northwest Express. Conditions began as powdery with a fresh coat of wind transferred powder on the top 500 vertical. Made the steeps up there a blast but there was a price. Below mid mountain on the Northwest slopes was cut up heavier snow from 2 days earlier that was almost concrete. Required jump turns to manage the chopped up snow. They did groom a run that you could catch but it still required you to navigate several hundred feet of the cement (they do not groom the upper steeps in the Northwest area). Lower on the Northwest slopes, snow was starting to soften/corn up (Northwest gives you highest non-summit elevation but also the lowest base elevation on mountain). Decided to head over to the Southern slopes of Cloudchaser given the morning sun. Got over there and all the runs are blues. Generously rated, the groomers skied more like Lollapalooza at SR for comparison. But plenty of fun to be had off the groomers and in the woods. Snow was soft and corny top to bottom over here. Spent a while exploring and found plenty of untracked snow from the 2 days prior storm.

Hit lunch at the Pine Martin base and skied a few runs off Skyline Express and Pine Martin Express first. Most of the terrain in here is mellow, though some decent stashes and lines by the Red Chair to skier's left of Pine Martin.

After lunch, went back over to the Northwest Express where the cement had finally softened. Spent the day skiing the runs and trees over there. Bachelor is a tree skier's dream, with well spaced pines in abundance below 8000'. Nothing super steep, but plenty of fun lines and quick surprise pitches all over. Didn't find many open tree Wells but did see a few so you do need to watch for those.
Summit Express never opened.

Day 2: Powder Day!
Got up to 5 inches of fresh, felt like more up top. Summit lift was not planned to run due to storm (apparently the Summit is on condition/weather hold often) so went straight to Northwest Express again. Temp had dropped to the low 20's overnight, so while not Rockie dry powder, was powdery non the less. Visibility was poor on the upper 400 feet of vertical all day, but the snow was great. Multiple runs of fresh untracked on the trails and in the trees all morning. Even with the light crowds, trails get tracked up fairly quickly. But the trees held fresh lines all day. The locals tend to gravitate to the wide spaced tree lines, anything remotely tight is yours it seems (and by Eastern standards, not tightly spaced at all). Never left the Northwest Express all day. Be sure to push far out off the top on skier's left to the far West. Tons of terrain off this traverse. Do not ski past the catchline, it is groomed and marked with signs/bamboo poles but no ropes. Go below and you'll be OB and hiking back up to lifts. 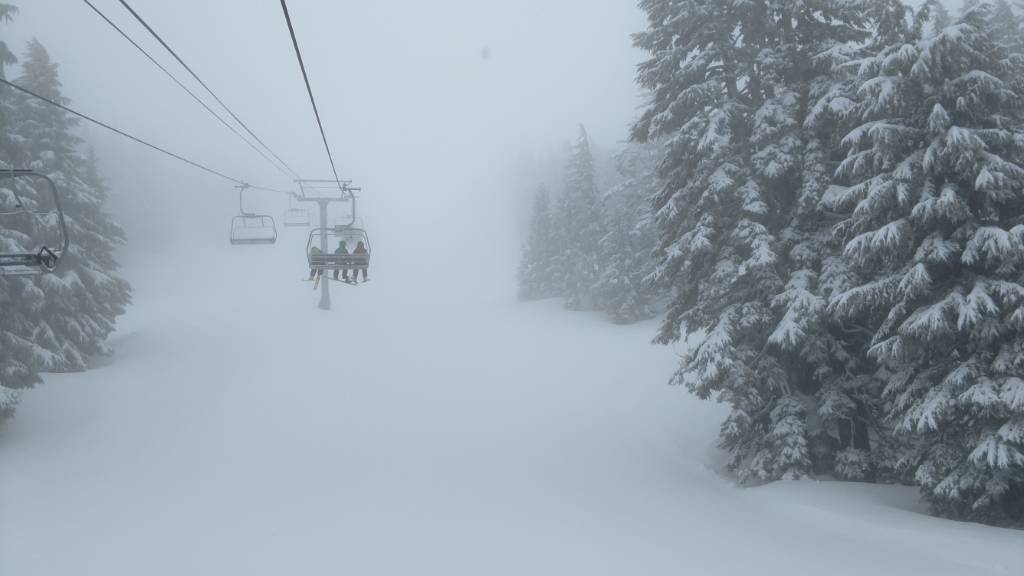 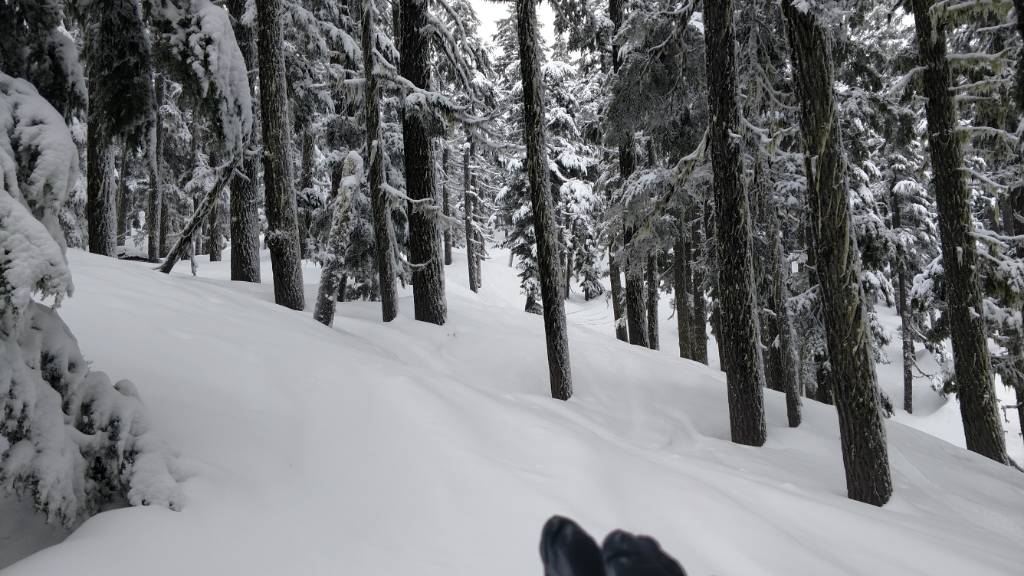 Day 3: Bluebird to spring
Summit Express is open! Went straight there and wow. Pick a direction, any direction off the top and point them and go. Some hiking is required to hit the front chutes, but it is worth the short hike. Front chutes are the real deal, steep and today very powdery. Probably about 700-800 vertical consistent pitch available. West Wall is steeper but shorter with a good cornice built up. Patrol had avvy controlled in the morning and that side did release, leaving a decent debris field below it. Made several trips down the chutes. Off the backside, they want groups only so I only cheated it twice. Not a steep, but tons of interesting lines dropping down into smaller chutes and trees. You hit the Northwest catchline, well pitched the entire length (it is looong) so never needed to skate or pole. Caught the NW Express and skied right back to Summit. Stayed on it most of the day. Skies the southern side, again so.e really fun lines in this direction. Going this way you have options for the catch out. You will hit the first groomer, which is the Sunset ski back. This is not the boundary, you can ski below this track and there are some interesting lines below (area here is called the low east). Then you hit the Cloudchaser catchline. This is the boundary. This catchline has about 5 uphill sections on it. Nothing too strenuous, some can be skated up. But being south-southeast aspect, was getting soft and gluey fast so be aware of that. Spent the balance of the day lapping chutes and summit runs. Just a ton of terrain from up there.

Overall, great mountain and especially this season, just an amazing amount of snow. Would recommend it and Bend is just a killer base town.

Sounds awesome! I've always wanted to get out that way. Maybe next year if its good.

Nice report. Glad you got to experience summit on a clear day. I had three days of summit skiing on a visit a few years ago. Most unusual experience to be able to ski 360 degs from the top of a mountain/volcano...definitely not in Kansas anymore 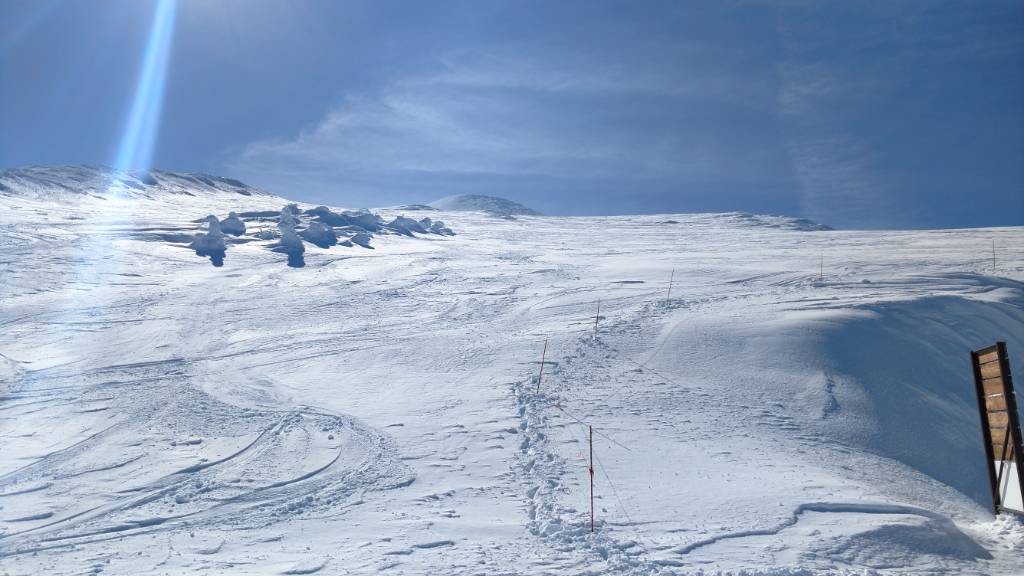 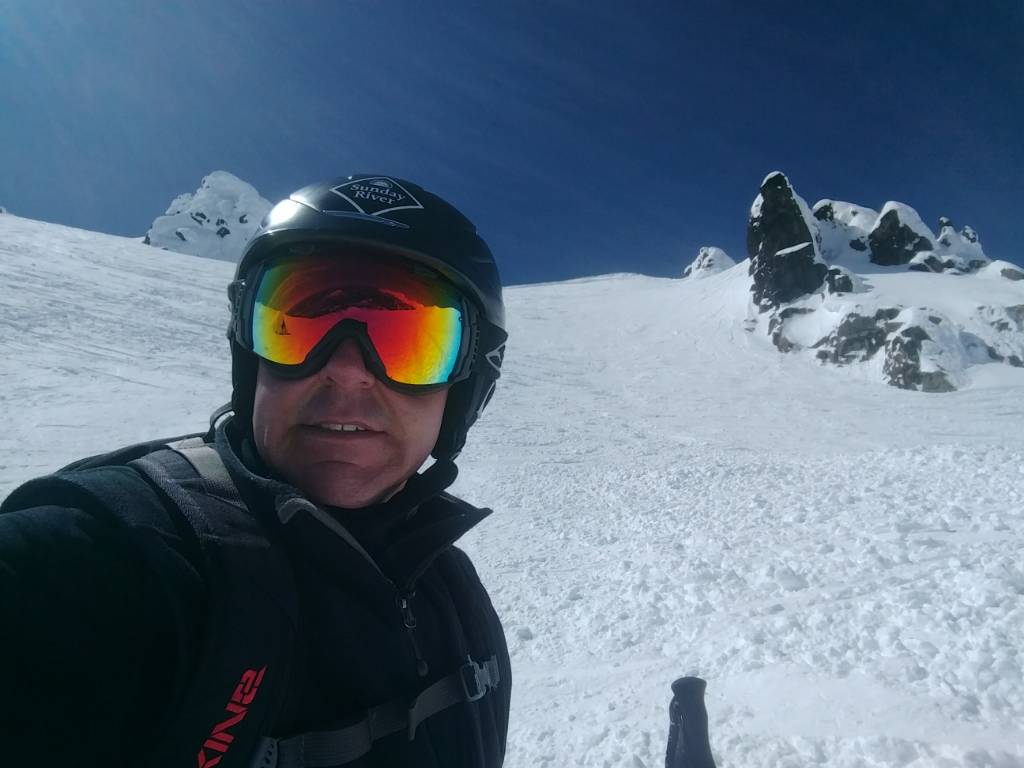 Wow. Amazing snow pack. They are talking about possibly keeping Squaw open all summer for skiing, first time in resort's history. Looks like Mt B. could go deep too if operators had a mind for it.

Cool thanks for sharing. Bachelor is top of my western to-do list!
You must log in or register to reply here.