We originally planned on skiing Cannon, but reports were that the conditions were not great and it was getting pretty windy to boot. So we looked in our magic bag of tricks and pulled out Ragged - the comp tickets that came with our Ride and Ski card. I was a little hesitant because Ragged has been slow at opening up trails claiming that they are going for quality vs quantity. In any case, Ragged benefited from the Saturday snow and got 4-6 inches so our thoughts were to go for it. We slept in a little and made it there by 10 (it is 40-45 minutes away from our home.

We got there and got on the six pack to ski all combinations from that chair starting with Headwall -> Reggae Glades. Both were in great shape. Reggae Glades had a bunch of 4-6 inch powder stashes off to the side and nice bumps were forming in the middle. Upper and lower chute were in pretty good shape as well - newly opened so how could they go wrong. Upper Ridge and New Found Ridge all skied beautifully with the exception of the very top of New Found Ridge where the wind was blowing off the snow. Lower Ridge was a very fun run for several reasons, first it was very fast, there were larger powder stashes where they left large areas ungroomed, and third I like thee way that trail is set up. Exhibition also a more recently opened trail was super fast unfortunately, right before each dip people tend to slam on the brakes and scrape the snow off but it was not problematic since we were making larger GS turns or straightlining it. Exhibition Glades was interesting - several inches of fluffy snow on top of bulletproof crust. It skied ok if it was first tracks but even then not that fun. There are many fallen branches in there and I got hooked up on one before I bailed. Sweepstakes and Birches as well as Crewcut trails remained closed.

We then headed over to the Quad excited to ski Flying Yankee but that was closed due to race training. Frankly that pisses me off. There are basically three runs over there. Showboat, Flying Yankee and Cardigan. Cardigan skied well but is very boring up top and gets a little better after the roller. Showboat was the most interesting there and yet not that interesting. My son and I ventured into the natural side of the trail which had its sketchy spots but it also had some nice powder in spots.

We headed in for a beverage and decided to eat the cafeteria food. Two cheeseburgers, and an order of fries - $22.00. The new pub menus at the bar is limited - they should add a few more pub grub items. Otherwise it is pizza that is not really that good. The bistro has a broader menu but quality wise it is poor and a little pricey! One interesting thing was them allowing any purchased from the ski area food could be taken into the pub including cafeteria food. Beer is basically unrestricted and they will put in a plastic cup to take anywhere on the resort, but mixed drinks require being a glass to distinguish them from normal beverages.

In the afternoon we did a replay of the morning - trails remained in good shape and we repeated Reggae Glades for our last run around 3:30 and even at that time I was still able to ski areas with powder.

Exhibition - note the sides that are ungroomed - skied really well! 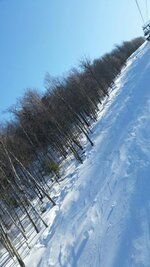