After a gorgeous drive over Rt 16 from the Loaf, arrived at Saddleback and clicked in around 1. This place has always a bucket list resort and once they announced reopening, I knew I would hit it up on a Loaf trip. 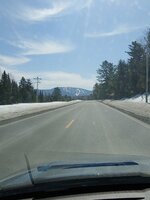 Started off right back under the lift on a half groomed Royal Coachman and my goodness...actual spring corn! Fun first run..the runout at the bottom got sticky in the sun but it was nice to find the soft snow I've been missing the past couple days.

Next run I decided to head to the Kennebago and started down Green Weaver, but was distracted by some nice looking bumps on Peachy's Peril and...my goodness, real spring bumps! Nice bump lines on most of the trail and much softer than anything I skied the past two days. I understand the aspect is a little more northwesterly here, but damn, it was just night and day compared to Sugarloaf. 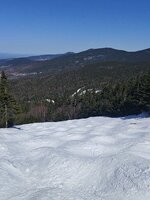 Took many runs off the legendary Kennebago. First was Wardens Worry which had a lot of thin spots but soft spring snow the whole way. Only kind of shitty thing is that there are a lot of small stumps sticking out of the snow on most of Saddleback's natural trails and they can really grab a ski if you aren't careful.

Curiousity got the best of me and I finally had to trek out to Muleskinner. It's a long, uneven traverse to get out there and very hot in the sun today. The trail is fun, but not sure its really worth the long trek which I feel like is better suited for Casablanca. The trail reminded me of Castlerock Run, really fun but not super special like hoofing it to Paradise at MRG or something. Mostly covered well and soft other than a crappy part near the bottom. 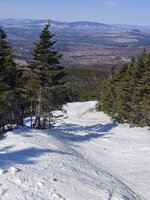 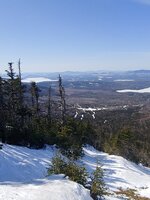 Got some wind in my face with a cruise down Tight Line. Nice steep wide open trail with great snow. 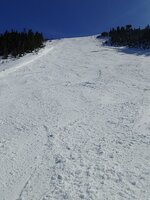 Hit up Family Secret, the liftline trail which had to be entered a bit lower down. Nice and soft most of the way although the left side was getting crunchy in the shade. I can't imagine lapping a T-Bar on this line, must've been some real tired legs in the old days.

Decided to head back to mid mountain and took America to Hudson Highway. Kind of a mistake today, very flat trail in spots and sticky snow. Gorgeous views though. 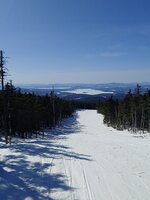 Had time for a few more runs off Rangeley. Crusied Grey Ghost which was kind of the main trail and somewhat crowded if you caught a large group. Parmachenee Belle was next and was very thin but had a few fun bump lines. Hit the park at the bottom which had a few fun features.

Next was Professor which was great after the thin spot at the top. More fun spring bumps and then smoother spring snow at the bottom. 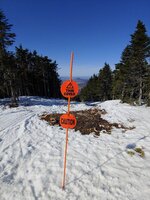 Finished up with Ghost to Golden Smelt. Looks short on the map but feels much longer when you ski it! Yet more spring bumps. All of the natural trails are thin but a blast, they very much have a Sugarbush/MRG feeling to them. Not super steep or anything, just narrow and good fun.

Wrapped up the day with a beer on the deck, which against all odds was selling beer on a 60 degree sunny day. I think with identical conditions, Sugarloaf has better expert terrain but oh my god is Saddleback blowing them away conditions wise this week. Glad they got this place reopened and with them on the Indy Pass, I plan on coming back every year. Went in with high expectations and it exceeded what I expected. 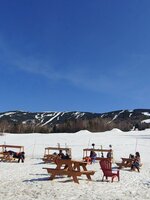 One more day tomorrow of GOOD spring skiing and then this trip is done. Hopefully have one or two more eastern days left before SLC in mid April. By the time that is over, might be Superstar time.

That's a beautiful mtn. Only made it there once a few years back for a two-day visit. So glad to see it reopened.
D

We used to go there for The Ride and Ski Card events. My wife and I would basically lap Kennebago lift. We did the Muleskinner trek there is a point on that trail there was an ice fall and my wife did not want to just ski over it so .... she took off her skis and decided to walk the edge and sunk up to her waist in snow. Freaked her shit out. After that experience, we would take Muleskinner to Casablanca and ski that instead and much more fun anyways. It became good training for my wife for some of the steeper trail traverses out west. BTW my wife loved Tight line and wanted to do it over and over which was also good training for steeper runs out west.

Glad they replaced the Rangely Double is that much better now because it was a very long slow ride.

Woke up to a cool, overcast morning. Didn't know what to expect for conditions with the cloud cover, but took my time getting up and was on the chair by 11. Start off with some,cruisers on Royal Coachman and Silver Doctor and both were silky smooth. Despite the cloud cover and brisk wind, somehow the snow was perfect.

I had read both on here and elsewhere that T-Bar line was sporting some nice bumps and is only a temporary trail before they build a new T-Bar. I headed for that and it was in incredible shape. A few bare spots, but top to bottom soft spring bumps on a nice consistent pitch. I wish they'd reconsider and put a double chair in instead so it can stay open. 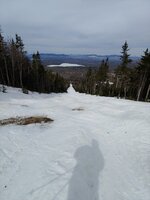 Decided I needed to check out some glades as I had ignored them so far on the trip. Started off with the bumped up and fun Peachy's Peril to Thrombosis Glade. Coverage is still pretty good and its a nice glade with well spaced trees. The pine needles kinda covered up some bad spots which made for a more tentative first run but figured out where those spots were pretty quickly. Did many repeats on the Peachy's/Thrombosis combo. 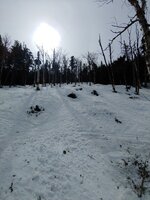 Next was Intimidator Glade which was awesome. Good coverage still and nice pitch and tree spacing. Would be a blast on a powder day, but good fun with spring snow too. 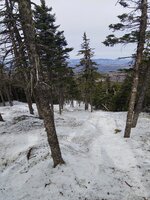 Attempted Dark Wizard next but it was barely touched. This led to a deep manly coverage that wasnt fun to ski, so I bailed out onto Family Secret and then over to Professor. Another trail that had no customers, so it was weird skiing an ungroomed but flat surface in the spring. Fun to rip up!

Headed down to Jane Craig which was also lightly travelled. A few small bumps and a lot of crappy areas up top, then the bottom half was like Professor...flat surface but not groomed so just totally rippable corn. 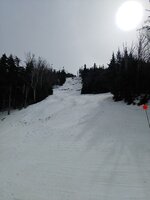 Had a quick lunch then kind of did a "best of" tour to wrap up the day. Up top I hit the slightly bumped up Family Secret and groomed Tight Line again which were both very fun. 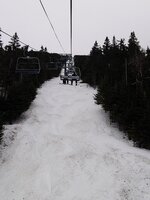 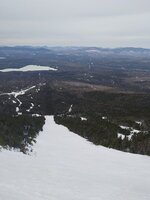 Enjoyed some views from Tricolor on the way back to mid mountain to finish the way with Peachy's/Thombosis and then a couple more on T-Bar Line. The bumps stayed sweet all the way through the afternoon, some of my favorite runs of the year. 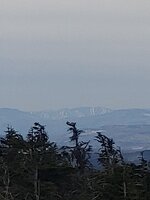 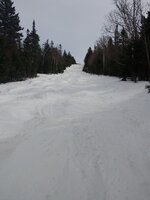 After some rather bad days at Sugarloaf, these two days at Saddleback were just incredible. Got to explore most of it, but never ended up going into Casablanca which I would've loved to have checked out. Also did not get to experience the full Kennebago runs as the tops were all closed except Tight Line. It's a slog to get up there but it's worth it. Can't wait to go back next year.

Agreed on putting in a chair in instead of putting back the T Bar. It's a fantastic bump run in its current state
D

Those exposed rocks and dirt spots really start to grow fast on sunny moderate days. It looked good at least when you were there.

Location
A minute from the Alta exit off the I-15!

I think I'll be up there Monday and Sugarloaf over the weekend. Based on your pictures a moderate storm of 6" will take things back to mid-winter...haven't lost the base yet it seems.

ss20 said:
I think I'll be up there Monday and Sugarloaf over the weekend. Based on your pictures a moderate storm of 6" will take things back to mid-winter...haven't lost the base yet it seems.
Click to expand...

I wouldn't be too confident in that. While I was there it was typical March...warm sunny days but cold nights. Now it's warm and humid even up there and tomorrow is a heavy warm rain for most of it until the very end. Might lose a lot of coverage today and tomorrow. Probably gonna need more than 6" but maybe not.
D

Zand said:
I wouldn't be too confident in that. While I was there it was typical March...warm sunny days but cold nights. Now it's warm and humid even up there and tomorrow is a heavy warm rain for most of it until the very end. Might lose a lot of coverage today and tomorrow. Probably gonna need more than 6" but maybe not.
Click to expand...

And what ever snow there is might be further north based on the local weather forecast on the news.

dblskifanatic said:
And what ever snow there is might be further north based on the local weather forecast on the news.
Click to expand...

Yup...look good on the models a few days ago until someone started the jinx thread lol. Might be a good refresher for the groomers but I dont see it being enough to reopen any lost natural trails.
T

Great report, I have to make it up there someday.

Nice TRs. It’s snowing here in SLC. Happy to give you tips on what to ski.
You must log in or register to reply here.