After three wonderful days at Mammoth we headed on up to Squaw Valley for our final two days of the season. Having heard that Squaw was expecting over 6k people on the 4th we knew that the 3rd was going to be the best day to try and ski Squaw. There were around 20 runs open that day but 8 to 10 of them needed to be hiked up to and most of those hikeable runs were past the Siberia lift (which wasn't spinning) on up to the Palisades area. In any event we started out warming up on runs off the Gold Coast lift and immediately realized that Squaw's blues were steeper than Mammoth's blues and as steep as some of Mammoth's blacks on the lower parts of the mountain. After doing 2 or 3 runs at the Gold Coast we moved over to the Shirley Lake area which holds the most snow due to it's position on the mountain. Again for intermediate skiing the first 3 runs off the lift were fairly steep but as you moved over to the furthest open runs at Shirley things flattened out a bit which made my wife happy. Unfortunately by 10.30 and after 2 or 3 runs in the Shirley area Squaw lost all power at the resort. We had to ride the lift up from the bottom on their back up generator which took about an hour to do, then they closed the resort. The three of us were all pretty bummed by the situation but before we took the Funital back down to the village we decided to have a drink or two at the Gold Coast lodge first. Thankfully we did as Squaw had the lifts back up and running about a half hour after we sat down at the lodge. Once the resort re-opened we headed back over to the Shirley lake area and I was able to traverse past the Funnel and the Attic runs to ski Arete which was all bumped up and happened to be the most challenging run of the whole Squaw/Mammoth trip. It was challenging not because it was the steepest or had the biggest bumps, it was the hardest due to all the exposed grass, waterfalls, rocks, and cliff that I almost skied over. I was able to avoid falling over the cliff and hiked back up to higher ground in my skis. From there I traversed over to the other passable side of the run that had a large, steep section of grass to side step down. It was tiring but at that point I was just thankful that I didn't end up flying over that cliff! After a few more runs on blues in the Shirley area we called it a day around 1 pm.

Thursday July 4th was a total zoo at Squaw. We showed up at the resort around 7.45 am and the line to get on the Funital was already over 1k people deep. It took us about an hour to get on the mountain to ski. Once up there the lines to get on the lifts were 15 to 20 minute waits. By 11.15 am we had rapped things up after about 5 or 6 runs which was perfectly fine and expected for the rare experience. The fact that we were even out there on the 4th of July was the highlight of the day. As far as skiing goes, I was able to traverse over and ski about half down the Funnel which was all bumped up and fun. I also hiked up to the Siberia area and skied the ridge which was pretty steep. I had thought about hiking all the way up to the Palisades area but that took about another half hour and I was already out of breath by the time I got up to the Siberia bowl so I thankfully passed on that hike!

All in all, for summer skiing conditions we had an outstanding time with the days at Mammoth being the highlight of the trip. You could pretty much ski the whole top section of Mammoth down to the bottom which to me is incredible for July. Riding up the lifts and looking at all the closed terrain at Squaw I could tell that I'd really have a great time there when the mountain was fully open. The place oozes of advanced steep terrain and I will definitely be back one day. I hope you enjoyed the reports, in closing I would highly recommend both Squaw Valley and Mammoth! I'll post some pictures of Squaw separately......

The 1st photo was of a warm up run in the Gold Coast area. The 2nd photo was of the traverse past the Funnel and Attic runs to ski Arete. 3rd photo was looking down Arete, to the left of that tree in the photo was the cliff. The 4th photo was the grass patch that you had to side step down and the last photo was part of the cliff area. (Sorry, I should have taken a better picture of it) I'd estimate that the cliff drop off was around 12 to 15 feet high which was too much from my old joints to jump off of! 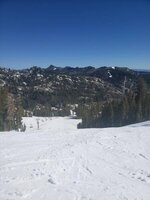 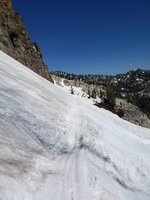 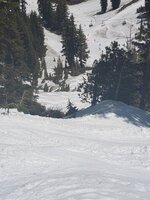 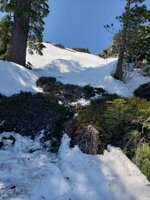 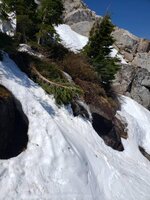 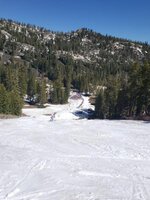 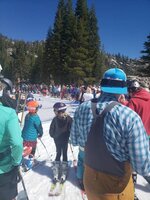 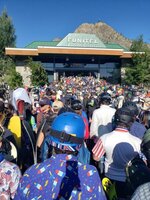 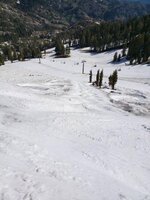 The 1st photo was sking down the Siberia bowl/ridge. The next photo shows what the hike up the Siberia ridge looked like, you can see the Siberia lift in the background. The Palisades are quite a hike past that lift and my lungs weren't having it! Although many people did hike to the top that day and skied down National amongst other runs. The last photo shows the top part of the Palisades on the 4th. The skiable looking area at the top is the National run, it appeared pretty steep in person. I hope you enjoyed the pictures. 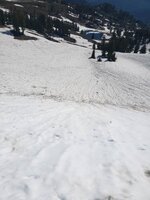 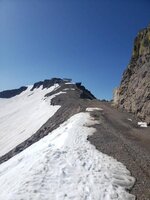 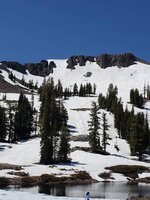 Way to get after it. Thanks for the reports. It was a banner snow year!
A

Makes me wish I had gone out for the July 4th weekend. (nah, never crossed my mind)
T

Makes me wish I had gone out for the July 4th weekend. (nah, never crossed my mind)
Click to expand...

Yes it was all about the novelty of 4th of July skiing, the conditions and crowds were not great but it was still kind of fun none the less. The Mammoth trip a few days beforehand was definitely worth the trip.

jimk said:
Way to get after it. Thanks for the reports. It was a banner snow year!
Click to expand...

Thanks! Yes it definitely was a banner year out west and in VT.

Tony
You must log in or register to reply here.