I had the good fortune to ski with Cheese and his friend on Saturday . I have been a regular at Sugarbush for years and a passholder for 8 years and I enjoy showing people around my home mountain. Saturday was a great day with moderate temperatures, soft snow, light crowds and spring skiing in January. We started off with a warm up on every kid’s favorite trail – Sleeper. The snow was ego boosting corduroy and Cheese tore it up at high speed. He also kills it on moguls and we hit a lot on Saturday. We basically went all over Lincoln Peak in the AM. I figure he won’t remember all the trails we hit so I’ll list them here. We hit Birch Run, Sunrise and Morning Star off North Lynx. Pushover Chute and Pushover. First real mogul run of the day was Twist which is a great natural snow trail. Mid morning we skied Downspout to the Heaven’s Gate chair and got a workout down Organgrinder to Spillsville to Lower Paradise. Visibility wasn’t great at the top but we hit Ripcord on our second lap. Before lunch we skied Domino on the way to the Castlerock chair which was basically ski on at noon. We skied Castlerock to Cotillion then took a break for lunch. After lunch we took the Slidebrook chair to Mt Ellen. A quick ride up the GMX and we took a run own Hammerhead then skied Elbow, Which Way, Rim Run and Northway before heading back to Lincoln Peak. The summit of Mt Ellen was socked in so we didn’t take the trip all the way to the top. Back at Lincoln Peak we did another run in the sun on Sunrise and finished the day with a trip down Murphys Glade to Lower Organgrinder and our last run a cruise down Snowball to Racers Edge. I thought we had a great day, covered a lot of the mountain and a great variety of terrain. I was pretty spent when we called it a day around 3:45.

Sunday I skied solo at Mt Ellen. The soft snow of Saturday locked up and was barely edgeable on the lower mountain where it was only in the 30’s early in the AM. The good news was that the summit temperature was close to 50 at 9 AM and the snow up top was soft and easy skiing. I did multiple laps of the upper mountain including three runs on FIS which was really soft and fun.

Overall it was a good weekend but I would rather have these temps and conditions in late April than January. There is still great snow cover but some areas are getting thin with exposed rocks, moss and dirt. Let’s hope we get back to winter this week with some new snow.

Here’s a view of the valley from the top of Inverness this morning: 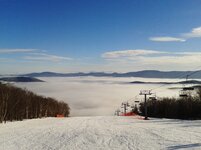 Thanks for the TR, looking forward to skiing the Mad River Valley again this year. I had the pleasure of meeting, and skiing with Cheese at the AZ Summit at the Loaf, great guy, and yes, he sure can turn em. It was fun skiing behind him while he was playing around doing some hyper carving, dragging his knuckles on the snow like a boarder.

Sure hope Winter returns soon, I skied my local molehill, Greek Peak, Saturday, and things were fading fast. Probably even worse after temps in the 60's yesterday. Hope the holiday weather wasn't just a cock tease.

Phew! I was hoping Todd would write this TR as I would have needed Alpine Replay or something similar to track everywhere he took Marge and I. What an incredible tour guide he is! Not only did he lead us around most of Lincoln Peak and Mt. Ellen but the chairlift rides were filled with Sugarbush history and continuous references to where we were, where we were headed and where we had been. He knows the resort and also draws information from his "regulars" to know where to go for good skiing and lower crowds.

As Todd mentioned, it was a warm day. That meant even though there was good coverage in the woods it wouldn't have been worth it to go in as the soft snow was likely the consistency of molasses. That didn't stop Todd from pointing out good tree runs from the chair and stopping multiple times along the trails to show us where we could duck in to each section on a colder snow or powder day.

Not only is he a great guide, he's an expert skier so he leads or follows you down the hardest runs on the mountain rather than just pointing them out then moving on like other guides. Even the trails that were bumped up were no match for him as he made his way smoothly down through the spring soft moguls.

So, if you're ever headed to Sugarbush and would rather spend your day following a great skier and guide rather than busting out the map and missing all the hidden gems of the resort, look up WWF-VT and see if he's free for a tour. Thanks SO much for a great day Todd and I look forward to flattening the Sugarbush woods with you some day when the temps are cooler.

Skiing this weekend at Sugarbush was bitter sweet nice temps but heavy snow. We were there both Saturday and Sunday and enjoyed the weekend workout. Saturday the trails were heavy from the get go since we had precip over night Friday into Saturday. The first runs had everyone questioning what they had on and the layers were shed quickly. The initial forcast for Sunday was drizzle to light rain, that forcast was adjusted Saturday night and Sunday ended up being awesome. The inversion made it a little strange as it got warmer going up the lift! The lower trails were the best since they froze overnight Saturday to Sunday and it made the runs fast on the lower mountain where the groomers were, however, by mid afternoon almost everything was heavy on Sunday. There were several trails that had thin cover, generally where skiers/snowboarders put the brakes on a lot (like Sleeper, Birdland, areas on Lincoln Peak and others). Overall, mogals were soft, providing a lot of control, and limiting speed. Cruisers required you to sit back a little to avoid the front tips from dipping now and again but carved really well. In the end, We found many of our best runs on Mt. Ellen where there were no lines (though lift lines were never unbearable anywhere). With the cold front coming in, it will be interesting to see how the mountains are this weekend. One thing I have notice about each trip report even those I have written, they never apply to the following weekend. It is New England at its best - you never know what the weather will be like from one weekend to the next!

Haven't been up to Sugarbush in years but have wanted to get back there. I have spent many a days driving past it on my way to MRG

I wonder how Castlerock is holding up. Thinking about doing Bush or maybe just Mt. E. Any opinions? What am I saying, there are always opinions here!

My plans to go Friday (1/25) were put on hold as temps were predicted to be very low, no substantial snowfall since the thaw/refreeze and grooming reports weren't favorable for my group (27% groomed). I'll try for another time.
You must log in or register to reply here.