Will keep this short unfortunately as I am exhausted but wanted to post a TR since I have not in a few weeks....

Met up with my uncle this weekend at Sugarbush and burned up one of my Ski VT vouchers I had been holding on to. Ended up skiing Mt. Ellen on Saturday since most of Lincoln Peak was on wind holds and my Uncle skied Lincoln on Friday and said it was pretty crowded and scraped off. As usual Mt. Ellen did not disappoint. No wind holds and crowds that were manageable (Huge by Mt. Ellen standards but would be considered pretty manageable at most other places).

Spent most of the day skiing Hammerhead, Tumbler, and Exterminator which were all fantastic. Great soft snow from the North Ridge express down all day and nice remnants from the dump on Thursday from the North Ridge Express up. Near the end of the day skied FIS and Encore which were also skiing very nicely and even took a run on Inverness since the snow was soft and no racing. It started snowing around 2:30 and continued through the end of the day and temperatures dropped like crazy from then onwards. Overall great day of bump skiing Saturday, as always Sugarbush in general has some of the best bumps.

Woke up this morning to find MRG and Sugarbush got 5 inches of fluff overnight and headed over to MRG to use up one of my Fox 44 Ski Card Vouchers. Arrived around 9 and was happy to find things were not overly firm after the warm up yesterday and that the new snow kept everything fresh. Started the day on Fall Line and then moved over to Catamount and Lynx before heading over to Paradise. All skied great with great coverage, bumps, and even some untouched powder here and there.

I moved over to the Sunnyside Double around 11 since the lines for the single were getting around 1/2 hour wait. Ended up following a group of 4 off to the right at the top and ended up way back in. Ended up following them down through some "unmarked" but obviously thinned out woods that came out at the top of the Birdcage that had great snow and steep, tough lines. Skied another run off the double before heading back over to the single to finish up on Chute, Catamount, Lynx, Glade, and Lower Antelope. Headed to the bar for a quick drink (always go to General Stark's when visiting MRG as a tradition) before heading out for the drive home.

Despite the lines, probably the best conditions I have ever skied at MRG. Coverage was excellent and could really rip down everything without having to worry too much plus everything was open and the woods were great. Snow wasn't too firm and was great pretty much everywhere.

I normally don't take too many pics but couldn't pass up this shot from Paradise: 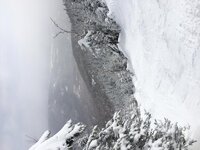 Nice report. I still haven't managed to make it to MRG. I took the liberty of rotating your pic. 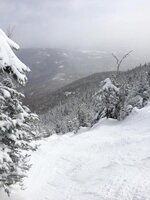 Thanks for the report! I was curious how Mt Ellen would ski on Saturday.

I got there for Friday and enjoyed the 4th chair- it was an epic day. Every time I thought, "I should really get going," it was apparent that another run was in order. And another, and another, and another... Skied A LOT of terrain that hasn't been excellent in a long time.
You must log in or register to reply here.