Live report that I'll update throughout the day.

So far, the place is a ghost town. Tons of snow. Timby and king pine are done turning for the season but hiking is permitted.

The snow is incredible. Super buttery and soft. Light winds and temps in the high 30s. 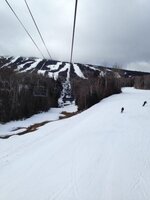 More to come as the day progresses

Gondi opened about 30 minutes ago. 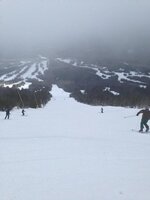 My phone bit the dust before I could finish writing.

Here's the wrap up:

What started out as a pretty decent spring start turned into what felt like late February. The wind was howling by 11 and it got fairly cold.

All ungroomed terrain was firm. If it hadn't been done in the past two days, the cold temps had set it up and, with no sun and temps not really breaking out of the low 30's, it didn't loosen up.

The good news is that the coverage is great. You can hike up timberline if you feel so inclined to ski top to bottom and not worry about exposed rock. Most trials off the summit, however, are out of play. Binder, cinder hoe, gauge extension, Gondi extension, etc are pretty much out. (There looks to be one line you can ski on Gondi but, it looks sketchy at best )

Spillway from the sluice cross was awesome. Upper spillway hadn't been groomed and the bumps were super firm. Again, a little warm up and some traffic would have improved things incredibly.

Sluice, Gondi, hay burner, kings, tote, and evens kidder skied great. Narrow gauge was also a respectable choice. Oddly enough, the heaviest traffic was on tote and scoot. (I guess that's not so odd as it was the easiest way down).

Run of the day? Probably either the second run down Gondi or upper Tote -> hay burner.

So the question on everyone's mind...how long can they go?

I heard rumors they are shutting down May 4th. I hope not because they would close with a ton open but, as is the case, skier visits play a big role in determining such things.

Some carnage on Binder. 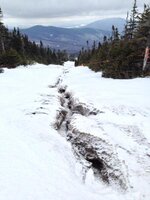 Nice report, BLR. It would be too bad to see the loaf shut down with so much open, but probably the reality is that skiers this time of year are day-tripping, and Sugarloaf is a long-ass haul for the masses.

Officially...ie Lift Service = SL has ALWAYS gotten the early axe by resort ownership..as whoever owns it at that point in time has always voted for Sunday River as the more viable destination for the Boston crowd...that's who they've always pampered, but commercial resort operations has nothing to do with how skiable a mountain is. A little snow is often around well into June.
Last edited: Apr 20, 2014

BackLoafRiver said:
Some carnage on Binder.

That's wicked cool. Never seen refrozen drainage like that. I'd hate to fall into it.

Great info. I will be up by mid day tomorrow for the weekend.
You must log in or register to reply here.