FINALLY got to ski the River for the first time! Arrived Friday night at the Snowcap Inn after a 6 hour bus ride. Got up bright and early Saturday to get first tracks. Got the 2nd gondola up and went to Aurora. Did all the peaks to get a sampler of the place. Even with all the trees and naturals closed there is still a ton of options. Skis a lot bigger than the 800 acres they have. Can't wait to come back when everything is open. Saturday was alright. A little icy, crowded. Sunday was a lot better. Picked up an inch of snow and no crowds after 2:00. Discovered Blackhole, which has to be one of my favorite trails. Top 50 feet was "point and shoot" skiing. Turning was not an option. Monday was the best of the three days. No crowds, and Vortex opened up, ungroomed, after 3 days of snowmaking. Lapped that half a dozen times.

Hate to say it, but White Heat is so overrated. Steep for a few turns but nothing real exciting. I prefer Black Hole much, much more because it is steeper, narrower, and a lot less crowded.

Complaints: Whatever bozo in Mountain Ops thought it would be a good idea to run snowmaking on the lower part of American Express, the busiest spot on the mountain, and then open it without a groom should be fired. They were blowing snow Saturday night till 9:00 on Sunday, then shut off the guns. I thought, "this will be quite interesting in a few hours". Sure enough, I'm coming back to the Chondola at 3:00 and AmEx is covered in full-sized moguls with ice in between. They should've shut the guns off at 7:00 and put a groomer on it before it opened. 2 hours of less snowmaking won't kill ya. Also, the quad at the base of South Ridge was closed till Sunday afternoon, resulting in massive lines at the Chondola. I know mechanical issues happen, and the quad's closure wasn't what upset me, but there was NO organization at the Chondola line. Chairs were going up half full, while lines were spilling out of the queue. 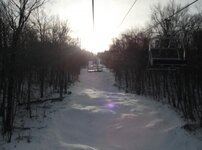 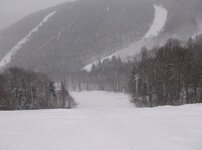 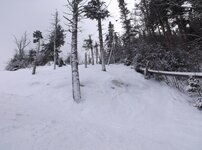 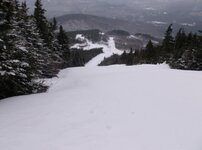 Downdraft on Spruce. Another one of my favorites, but the lift is so slow I only did it a few times the whole weekend.

I'm a big fan of the River. Oz is great with a ton of snow, it always seems that when they report say 6 inches, Oz gets 8-9. Was the Blind Ambition glade open? I love that one.

Sweet. I am heading up Friday morning til Sunday. Thanks for the trip report, I was wondering what was going on up there besides the reading the snow reports on the SR website.

I totally agree that White Heat is overrated. The first 1/3 is a bit touch and go with the mass of people that go there but after that its a sweet run.

A couple observations, having worked with some of the snowmakers and groomers. When they blow the snow whales, they let them sit a couple days for the water to drain out of them. Man made snow has a lot of water in them. If they run a groomer over them right away, you ain't gonna like the result, all they'll do is pack up a nice hard ice pile, much like compacting a handful of slush into an ice ball during a snowball fight. If they just blow a covering over the trail, that they can groom.

I do agree with your sentiments of black hole vs. white heat. WH is steep and straight, and EVERYONE goes there to test their mettle, earn bragging rights, whatever. Black hole and vortex are more my style, a whole lot less people there. A quick glance over my shoulder often tells me I have this trail to myself! (BTW, if you really want bragging rights, skip WH and go to Shockwave right next to it, when open. No one else will be there).

Thanks for the future tips. Blind Ambition was not open. I poached Last Tango to try out some trees. It was OK. 2 inches on top of ice.

BTW, I looked at Poppy Fields while traversing on Kansas. That's some serious tree skiing.

Looks like fun the wife and I are going to try and make it a weekend the first week in March.

I have stopped to look at poppy fields, just because. It's on a flat traverse so when you stop... you have to skate or push all the rest of the way to the next downhill. I just can not imagine trying to ski that! What an adrenaline rush for anyone capable of safely skiing that!!!
C

Heading to Sunday River tomorrow morning for two nights. Thanks for the insights. This is my third trip but I haven't yet to experience it in good conditions. First time most of the lifts were closed because of wind, second year we couldn't see because of the fog. Third time lucky

They do a great job with whatever they are given to work with. The groomers have chewed up all the ice storm damage and the skiing is good. (Yeah, we could use a good ole noreaster) Lifts start spinning at 9 AM.

I love skiing in the storms, after them and 2 days afterward is my favorite. The groomers have packed it all down and it's soft everywhere! Bring on the snow!!!!
C

60% chance of snow and arctic temps!

Cold temps... yeah there is that. Not an issue to me, it only means a whole lot less people out there with me and the snow stays snow longer. I seriously weirded out a girlfriend when I skied in -74 degrees with windchill at Attitash when they closed Wildcat down. I drove that far to learn Wildcat was closed. It was ski two runs, go in and thaw out, ski two more..... A dozen runs til I had my fill of it.
C

Just got home from 2 days at Sunday River. Cold for sure but the conditions were great, no crowds and plenty of Jaeger

Seems like you had a great time ss20 and pretty good snow! From your description, the glades seemed to be a little precarious though.
Last edited: Jan 25, 2014
You must log in or register to reply here.