Simple words to some up the day. Epic!

After arriving late last night and driving from the hotel to the loaf I ended up at the lodge around 8 to boot up and head down to first chair. Heading up the lift you could see how the prior storm of about 18 inches was really setting up an amazing day. After heading off the super quad I decided I should probably head down a groomer to get a feel for the new skis down a long trail with some decent vert. After the warmup it was time to get the day going. No headed up the quad and down to the timberline lift where there were so many ungroomed powder stashes to be had. After hitting a bump trail and a very narrow chute down the side of a trail I was heading up the lift and discussing the mountain with a local who pointed me to the pipe fitter glade ( I think) after a real narrow entrance the tree area opened up to an untouched area with fresh to be had everywhere. The trees were a little tight but so much fun. After this I decided to see what the snowfields were all about. The fields were fun but it felt to me you were just skiing an area that was too wind blown and way to much like the east coast but still fun and an experience.

Heading down a bunch if ungroomed and bumpy runs I made my way across the mountain and found Bracket basin. I really wanted to see this area but because I was by myself I decided against it but it looked amazing from the entrance ( and it was). So I decided to continue down the run which was a wall to wall ungroomed bump run that was pretty steep in places but really soft and fun. After heading back up the king pine I decided I needed a breather so I started heading to the lodge and decided a trail called misery whip couldn't be that bad. This trail was ungroomed, bumped and was pretty much a chute and steep. The legs were burning after that one as the trail earned its name.

After hitting the lodge the day got real fortunate as a group of guys I was chatting with invited me to ski with them as they were heading into bracket basin. We headed up and found a absolutely covered deep area that felt like it went on forever with so many options down. The trees were great with deep snow some narrow areas cliffs etc but everything was negotiable with options. After a couple UBS in this winter wonderland I broke off from the guys and headed to the lodge for lunch.

After lunch I ran back into the guys and back over to the basin after a groomer or two. We did several runs in there and never hit the same area twice. Once they finish this massive expansion it's going to be unreal. We just kept going to skiers right and found so many stashes to be had even though one time we got near the boundary and found ourselves traversing back. After closing out the basin we did a couple trails down to the lodge and I called it a day as I didn't want to push it too much on day one.

In summary this was probably one of the greatest days I've ever had skiing. Powder bumps trees and warn weather what else could you ask for. New skis performed great and I think were a great addition.


I took pictures and film and will link them when I can.

probably one of the greatest days I've ever had skiing. Powder bumps trees and warn weather what else could you ask for. New skis performed great and I think were a great addition.


I took pictures and film and will link them when I can. 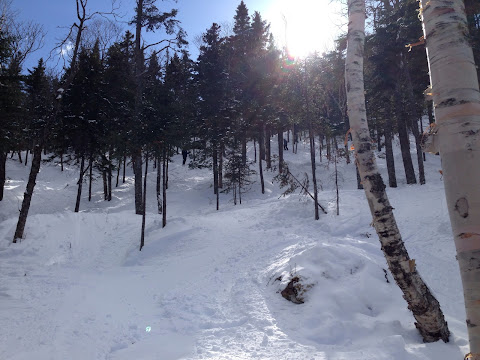 nice report, mr v...thanks for posting and glad you got some goods

Looking awesomely out their. Good going the Bush might not beat the Loaf but I think you enjoy it to.

Glad you had some great skiing!

Good timing V. Got some good weather....the day goes by too quickly there.
You must log in or register to reply here.