So we decided to kick off the new year with a day trip to Vail. We were not sure what to think since people talk about horror stories of huge lift lines. I have been looking at line times on Epic Mix and did not see anything scary all week. We also had expectations that fewer people would be there. We were right! Many times we had runs to our selves, parking was easy and lift lines were non-existent. It was a Bluebird day and temps were in the low 30's.

When we first arrived around 10:30 we took the Born Free lift and did a run through the skier cross course. Then took the Eagle Bahn Gondola which is one of the nicest gondolas I have been on. We then skied into the Game Creek bowl which on the map looks small but is actually quite large. We did a couple runs there that were fun. The conditions were like a PP surface scraped down to an edgeable styrofoam like base. Probably the hardest surface experienced so far in Colorado. The bumps that we skied hard good snow in them.

We then wanted to work our way to the middle of the front side and skied an area called Kangaroo Cornice which is a wide open face that had nice bumps and good snow the hit Challenge which was another short bump run. As we came into the slow zone my son decided to spray the slow sign and the yellow jackets busted him. They were going to write him up which would have suspended his pass for two weeks due to another infraction at Breck (in the other trip report). I talked to the guy and he let him go with a verbal warning. BTW once your pass is suspended you have to take a safety class to get it back.

In any case, we proceed to take runs from Wildwood and Mountain Top lifts. Every run was solid with nice dry snow either chop or PP. The trees we skied were all pretty well tracked but fun as well. So far we were all smiles. My wife was still a little bent about Vail law enforcement, but happy!

We now decide to hit the back bowls which we have been looking at from the ridge several time now. As we started down the Catwalk we settled on Sun Up Bowl and skied Headwall. Bumped up on the sides and slightly bumped in the middle. I cover the whole gamut while my wife took the middle. We skied to Sun Up Lift and skied I think Yonder Gully which as not bumps but really steep IMO. From there we skied down another Catwalk at the base of the valley over to High Noon Lift. It was a little this in spots. As we headed up the lift I was floored - so much terrain so little time. We then did a run down Forever which had a firm wind blown powder chop. While it skied well it was inconsistent. Towards the bottom around the trees if was better and bumped out a little. We took High Noon back up to the the ridge but as we were loading we saw an older man bundled up in a sled strapped down being given an IV and some shots. Never seen the before.

Once at the top we skied down the front side on Espresso and skied the trees there which was a cruise through the woods then we stopped for a beverage. While we brought our own stuff it was too far away and paid $22 for an IPA and a Bloody Mary. And for my son $11 for a hot chocolate and a cliff bar. Oh well.

After our break we thought we should work our way to the west side of the village (where we parked) and started a long ass run from the Wildwood lift down Eagles Nest which is a traverse. Then we dropped into Ledges a nice cruiser over to a wide open glade the to another trail which brought us to another open glade and finally over to Post Road and Born Free. We tried catching a last lift ride by missed by shear seconds.

I do not care what anyone thinks about Vail. There is legit terrain all over the place there. We spread ourselves out over the entire place as much as we could and covered a boat load of terrain because the lift are so darn fast. We are excited to go back.

A shout out to West Tavern in Frisco. We arrived there for Happy Hour and had some apps. One of themost was Bone Marrow which seems popular out here. 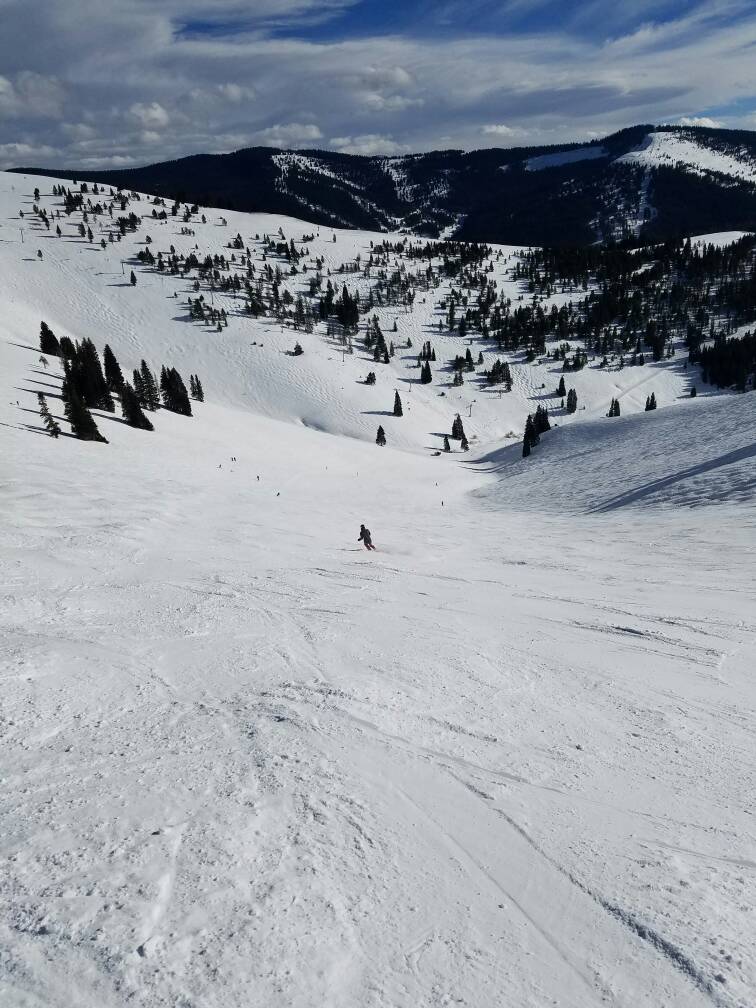 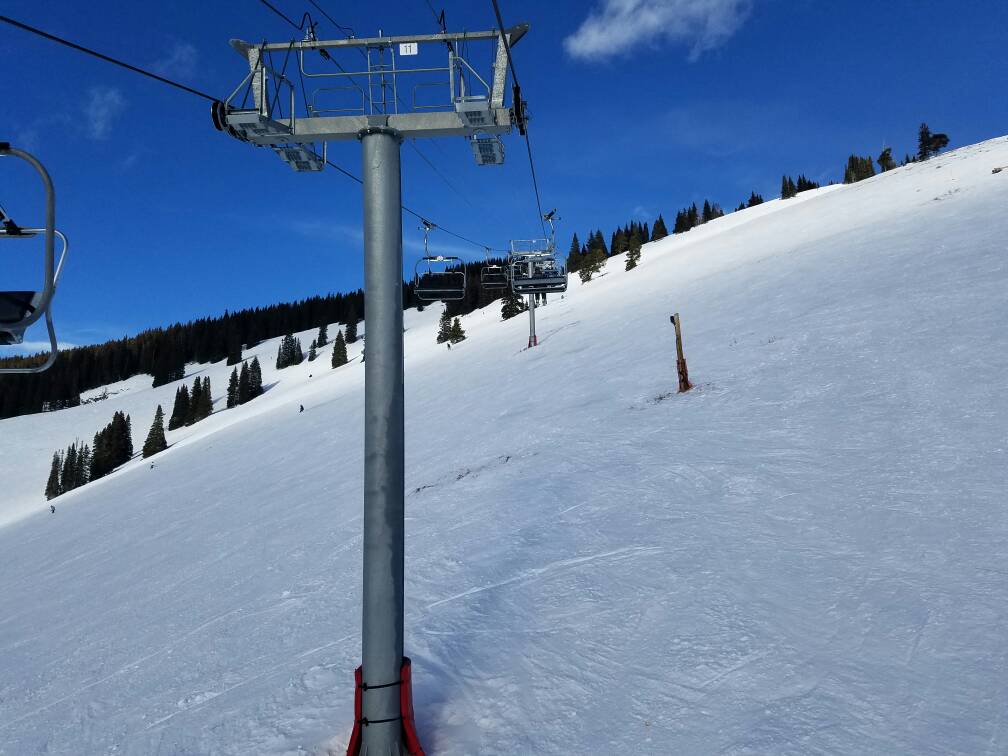 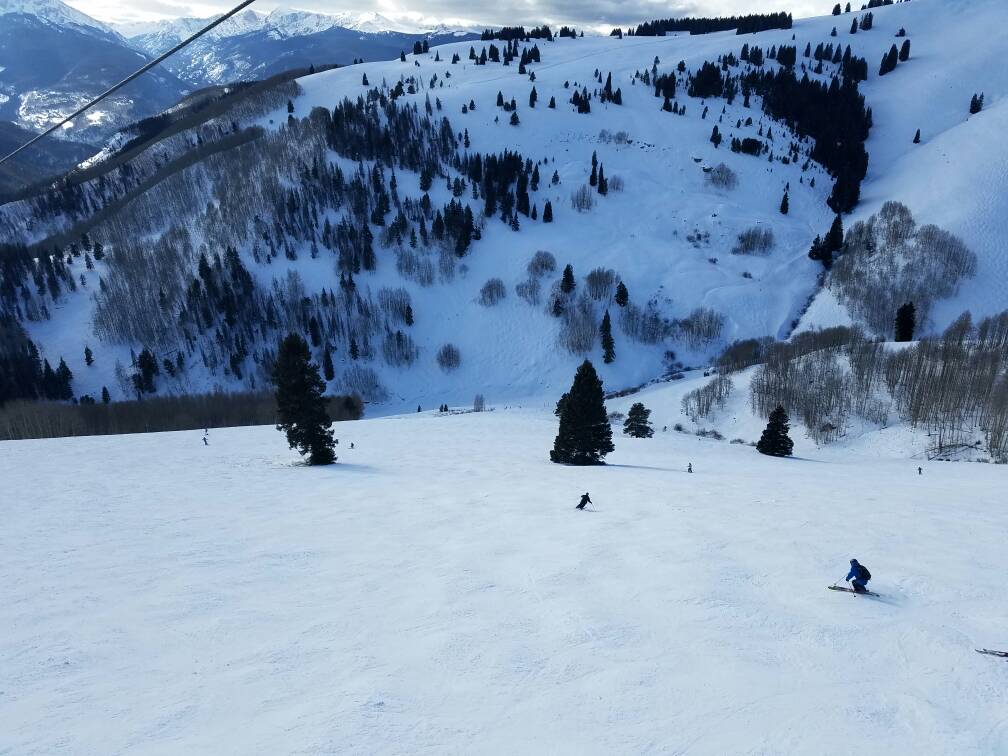 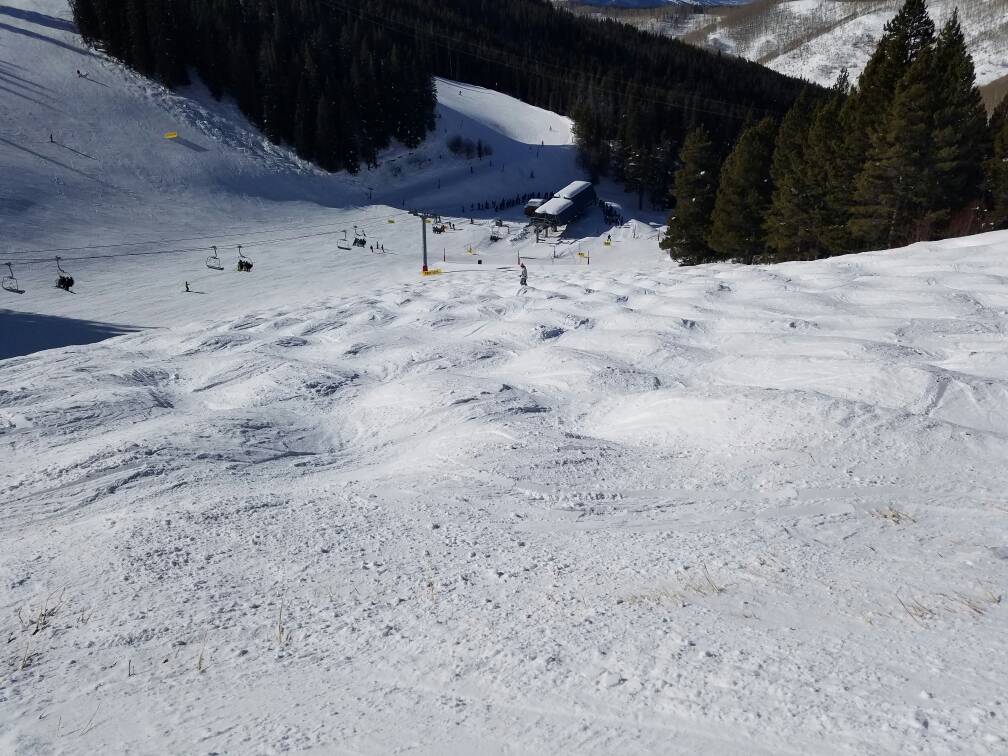 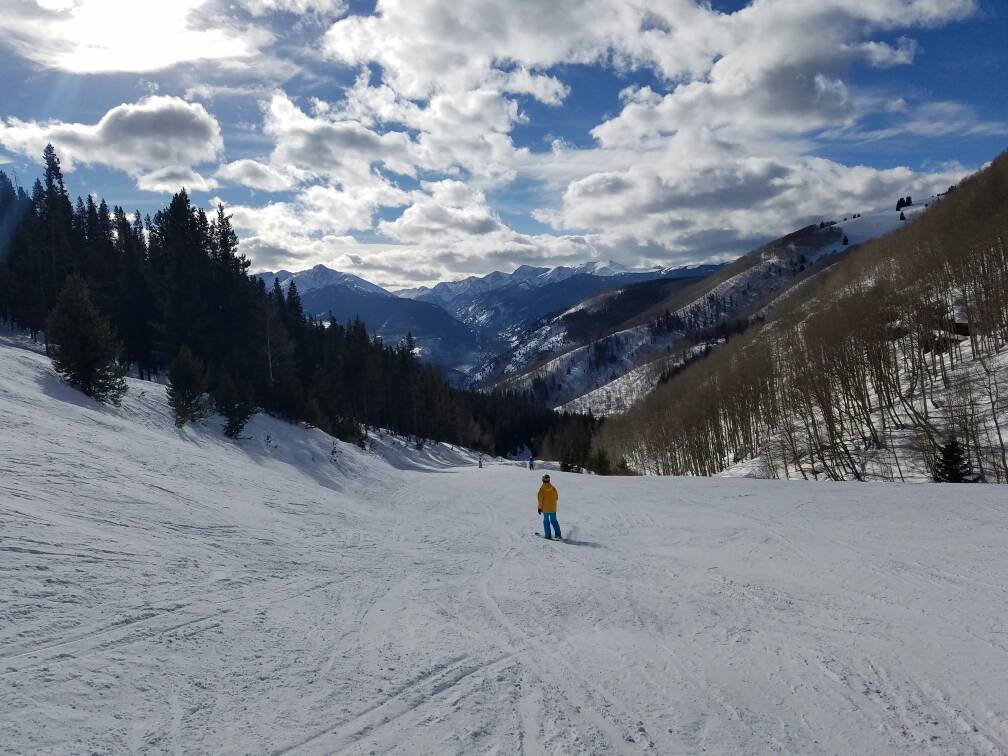 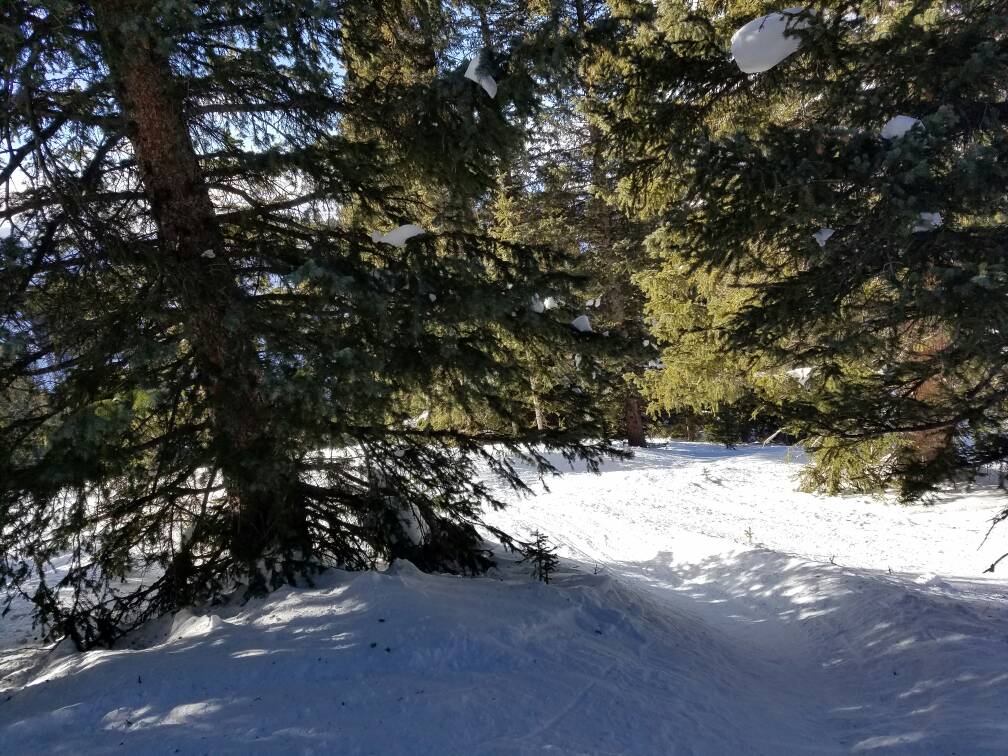 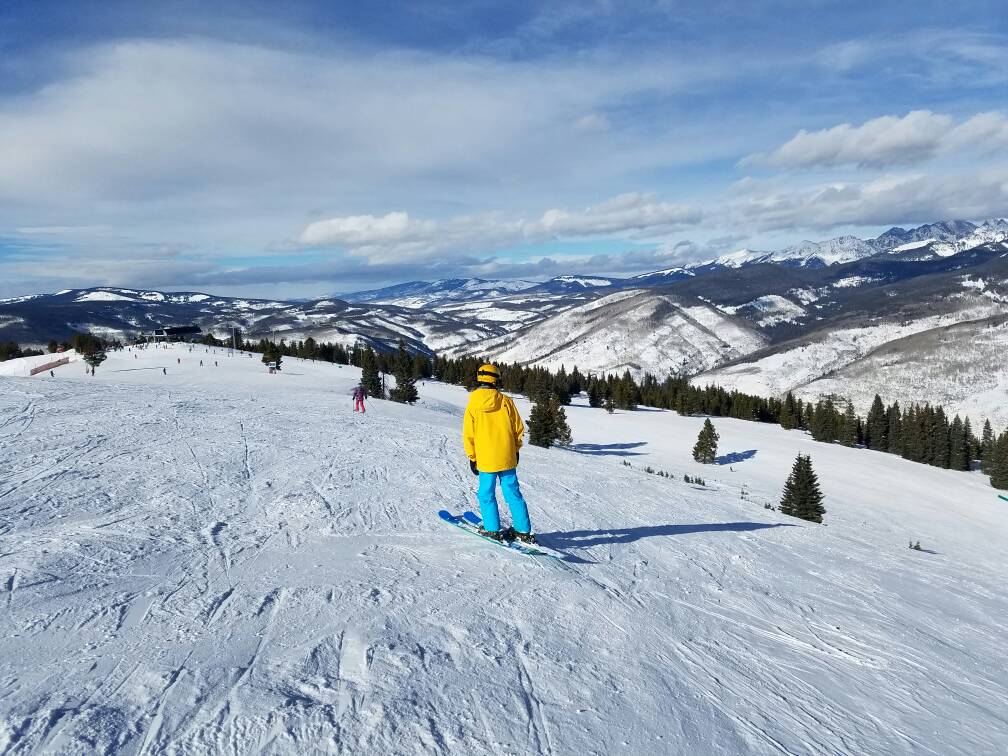 I was pretty impressed with Vail also, when I visited last season. We wandered around with no particular mission and enjoyed good conditions. The lift ticket prices were very offensive but I'd go back. The skier density seemed tolerable throughout the day but, upon returning to base we hit a bottleneck on trail I suddenly became aware of all the skiers I hadn't noticed all day.

We stayed a 2 minute walk from West Tavern! That place was life saver when I was too beat to go anywhere further.

Edd said:
I was pretty impressed with Vail also, when I visited last season. We wandered around with no particular mission and enjoyed good conditions. The lift ticket prices were very offensive but I'd go back. The skier density seemed tolerable throughout the day but, upon returning to base we hit a bottleneck on trail I suddenly became aware of all the skiers I hadn't noticed all day.

We stayed a 2 minute walk from West Tavern! That place was life saver when I was too beat to go anywhere further.
Click to expand...

We noticed the same at the end of the day as well that others were there. On Post Road since everyone was trying to get back to the base but it was tolerable. West Tavern has good eats. The cost was not an issue for use due to the Epic Local Pass. We also brought our own lunch and beer to avoid Vail prices.

Surprised that no one commented on how crowded Vail was. Should have taken pic of the non existent lift lines. Where is FBGM?

Gorgeous! Is "firm" out west similar to east coast "firm" or Cannon "firm"?

That "firm" looks pretty soft to me, but the camera can play tricks on you.

No - firm here has no ice and is still edgeable. Have not hit ice yet. It is a weird dry solid foam like consistency. It even scrapes quietly. But you can really rip nice railroad tracks on it.

Plus it depends, I think all of those pics all have good snow. Firm was over in Game Creek bowl and only on one run and on some Cat Tracks.

Yeah that wind effected snow firms up weirdly. Really does feel like riding on styrofoam especially up in the higher terrain.

Nice report. I love the skiing at Vail, the base area not so much.
You must log in or register to reply here.