Originally planned on opening the season at Windham yesterday, but with Wachusett announcing their opening was moved up I decided to just wait one more day. Bought a session 2 ticket because they're apparently still doing that shit 2 seasons later and clicked in right at 12:30 on a sunny 40 degree day.

They had their usual opening fare of Conifer, Ralph's, Challenger, Indian Summer, and Ollies. Spent most of my time on Conifer. With the warm sun it had a lot of nice soft areas, especially once below the first road. Above the road were a few slick spots which really firmed up when the shade set in. But overall the coverage is excellent pretty much top to bottom, no complaints there for opening day.

Took a few runs off Minuteman to check out Ralphs and Challenger. Ralph's had good wide coverage for most of it, but I feel like they might've spread it too much. Base isn't very deep in a lot of areas and some trouble spots might pop up in the warm rain this weekend. Challenger had a lot of areas of WROD a single car track wide. Some really thin areas as well. They just barely got enough snow on it to open it and I really don't think it will make it past Friday. That said, both trails were velvety soft and fun to ski, just be aware you might run into thin spots after a couple more days and they'll probably need a good snowmaking romp next week.

Didn't check out the bunny hills but they had a small park set up near the bottom of Indian Summer where it widens out. Good spot for that instead of the usual choke point on Challenger. Decent crowd on hand and the trails occasionally felt busy if you caught a group at the wrong time, but never waited more than 5 chairs.

Nice to get day 1 in the bag. Day one gets a little tougher every year these days, but Wachusett is a good warm up. Not sure what's next for me, I barely have time to breathe in December because of work but hopefully can work in a day trip or two before Christmas. 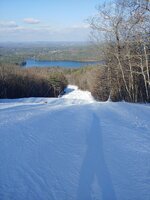 One of the WRODy sections of Challenger 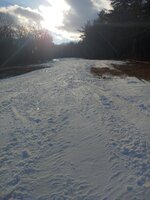